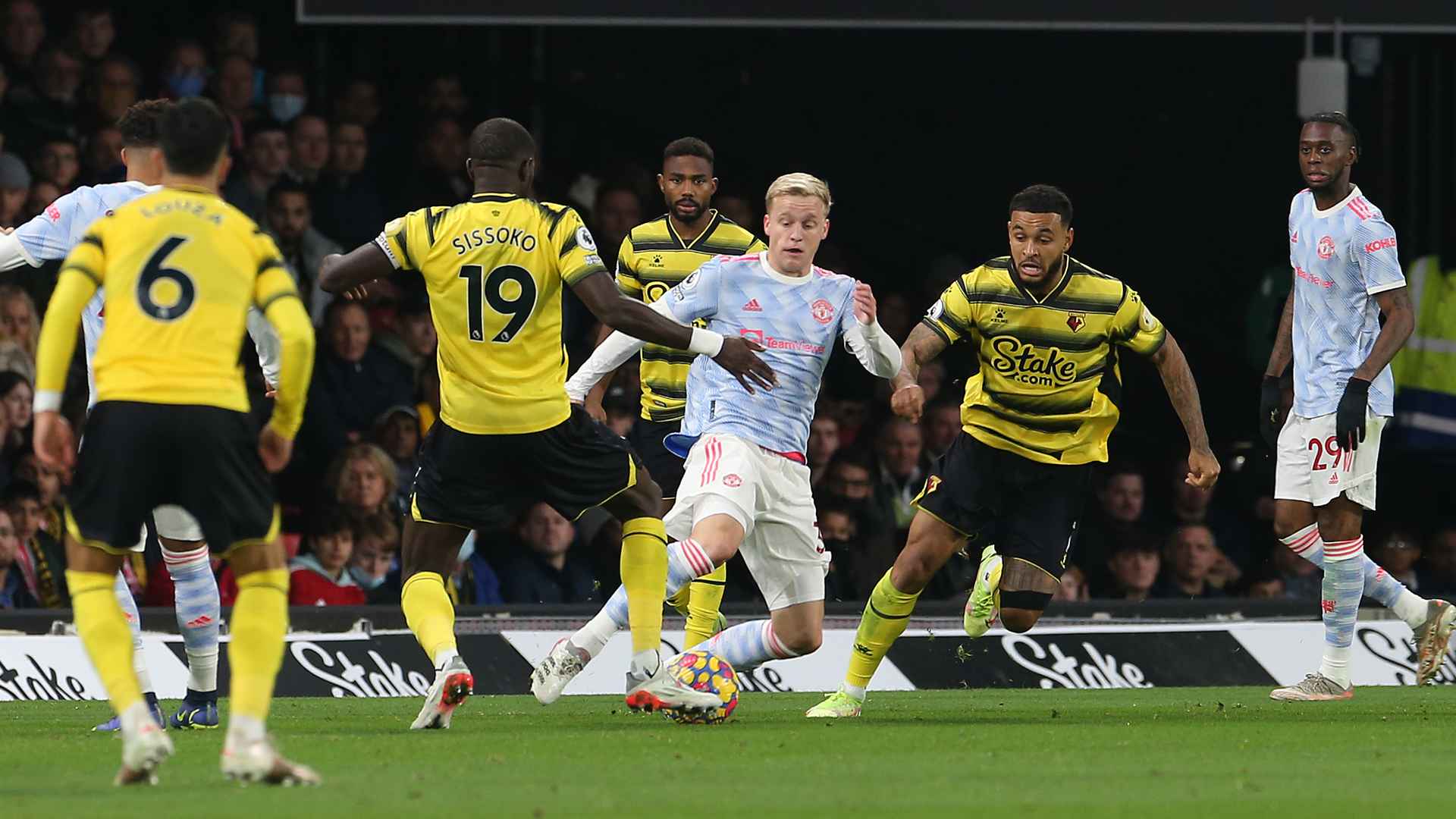 Manchester United fell to a disappointing Premier League defeat at Watford on Saturday afternoon, as the hosts scored twice in each half.

It was an afternoon to forget for Ole Gunnar Solskjaer’s team as the Reds lost our first match following the international break. .

The encounter at Vicarage Road got off to a manic start with David De Gea saving not one but two Ismaila Sarr penalties as the Senegalese's first attempt had to be retaken. However, first-half goals from Joshua King and Ismaila Sarr ensured Claudio Ranieri’s side still went into the break two goals up.

Donny van de Beek joined Anthony Martial in coming off the bench at the start of the second half and the Dutchman restored hope for the Reds by scoring swiftly, in the 50th minute. A turnaround seemed possible but when Harry Maguire was sent off for collecting two yellow cards, it made United’s comeback task more difficult.

In stoppage time, Joao Pedro and Emmanuel Dennis put the game to bed as the Hornets ran out 4-1 winners under the floodlights.

It was a day to forget for United at Vicarage Road.

The Reds started the game brightly with Nemanja Matic trying to play Jadon Sancho in behind the hosts' defence with some clever passes, but unfortunately the Serbian midfielder couldn’t quite find our tricky winger in the opening moments.

In the fourth minute, a mishit clearance from Bruno Fernandes started a series of bizarre events. The loose ball ended up in the feet of ex-Reds striker Joshua King, who was dragged down inside the box for a Watford penalty. Ismaila Sarr stepped up to take it but just as he did at West Ham back in September, David De Gea pulled off a strong save to prevent the home side scoring from the spot.

However, Kiko Feminia reacted quickest to the rebound and seemingly put the hosts ahead when he smashed it in. However, a VAR consultation found Feminia and a United player were both inside the box at the point Sarr kicked the ball from the spot, leading referee Jon Moss to order a retake. Same taker, same place, same outcome. De Gea produced another majestic save to keep the scores at 0-0.

The Reds' first chance of the match came on a counter-attack as Cristiano Ronaldo ran down the left before a shot from our no.7 was blocked for a corner which unfortunately resulted in nothing.

In what was an end-to-end half with plenty of hefty duels, both teams created dangerous moments. Harry Maguire put in several impressive blocks to deny Sarr on the wing before getting in the way of a big King chance from six yards, preventing the former United man from scoring.

Unfortunately, the Norwegian forward did find the back of the net in the 27th minute. Watford’s no.7 tapped home from close range following a run from Emmanuel Dennis on the left. 1-0 to the Hornets. United wanted to bounce back immediately and Marcus Rashford got close to an equaliser shortly after King’s opener. Following a clever ball in behind, our no.10 volleyed towards goal but former Reds keeper Ben Foster reacted well to save the 24-year-old's effort. Rashford tested Watford’s no.1 again moments later with a low driven strike towards the far corner but once again Foster thwarted him. In the 36th minute, King ventured beyond United’s backline but his fellow Scandinavian, Sweden captain Victor Lindelof, came in with a brilliant tackle to take the ball off the striker's toe. Watford’s no.7 had another chance shortly after but, unmarked, he headed straight at De Gea from inside the United box.

Just before the interval, Sarr eventually found a way past the Reds' no.1 as he hammered in Watford’s second goal, meaning the Hornets went into half-time with a comfortable advantage.

David De Gea saved two penalties by Ismaila Sarr in what was a manic start to the match.

Ole Gunnar Solskjaer opted for a double half-time substitution as the Reds looked to bounce back in the second half. Marcus Rashford and Scott McTominay were replaced by Anthony Martial and Donny van de Beek, and the latter made an immediate impact.

In the 50th minute, the Dutchman put the Reds right back in the game following a lovely United attack. A great cross from Sancho found Ronaldo at the far post who headed down to van de Beek, and our no.34 slotted in his first goal of the season to give the vociferous away fans the hope of seeing another dramatic comeback.

Shortly after, the Reds almost had an equaliser through Bruno Fernandes but our no.18’s powerful effort from outside the Hornets' area went wide. Then, in the 57th minute, Ronaldo was only a spectacular save away from equalising. Van de Beek played our no.7 through for a one-on-one with Foster but unfortunately the Portuguese couldn’t beat the former United man between the Watford sticks.

Donny van de Beek came off the bench to score United's only goal of the afternoon.

As United looked to find an equaliser, the mission became more arduous as Maguire was sent off in the 69th minute following his second yellow card. Ronaldo tried to pull off a spectacular effort from an acute angle inside the Watford box, shortly after our captain’s dismissal, but he couldn’t find the target.

Although the Reds were a man short for the final moments of the game, United kept pushing the Hornets and created some good chances, with Ronaldo going close again with a free header 15 minutes from time.

In the 77th minute, plenty inside Vicarage Road thought the Portuguese superstar had equalised. A brilliant cross from the left found van de Beek in the box and the ball ended up at the feet of Ronaldo who dribbled past two Watford players before poking the ball in the net. Unfortunately, our no.7 was deemed to be offside.

The Reds pushed on and Fernandes had a great shooting opportunity in our next attack but from 25 yards, he fired over the bar.

In the 83rd minute, Luke Shaw had to be brought off after a powerful cross hit the England international in the face. Diogo Dalot came on for the final minutes in place of our no.23.

In injury time, Sancho was replaced by Jesse Lingard before Watford ran riot, scoring two injury-time goals through Joao Pedro and Emmanuel Dennis which secured a famous 4-1 win for the Hornets on a disappointing day for United.

Harry Maguire was sent off in the second half after earning his second yellow card.