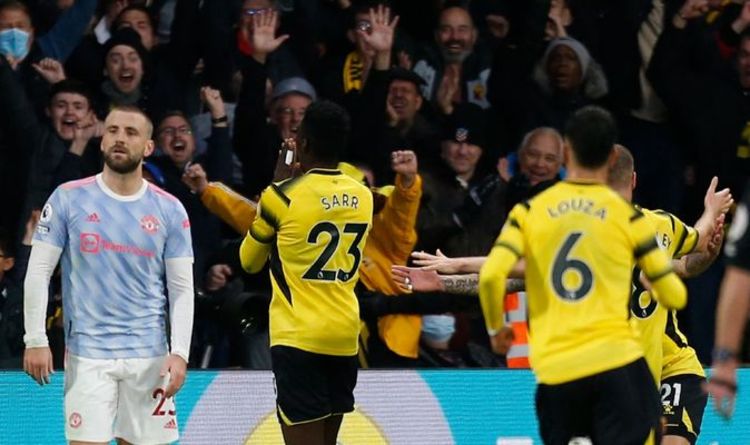 Manchester United boss Ole Gunnar Solskjaer is in big danger after his side's 4-1 defeat to Watford on Saturday. Losses to Leicester, Liverpool and Manchester City haven't been enough to dislodge the 48-year-old from his position as manager. But it may do now after they were outplayed for 90 minutes at Vicarage Road.

United were lucky not to fall behind against Watford inside the first 10 minutes, with David De Gea saving two penalties from Ismaila Sarr to keep the Hornets at bay.

However, Watford struck twice quickly before half-time with Joshua King, Sarr, Joao Pedro and Emmanuel Dennis all finding the net.

After the break, United were better.

But while Donny van de Beek struck, netting his first Premier League goal of the season in the process, it wasn't enough to earn a point.

So Express Sport will now take a look at United's worst four players on a day where the result, once again, wasn't what they wanted.

It's been a stop-start season for Marcus Rashford at United so far.

Injuries appear to be continuing to plague the forward, who has netted only three times since returning from shoulder surgery last month.

And Rashford was definitely far from his best at Vicarage Road, looking toothless alongside Cristiano Ronaldo and Jadon Sancho up top.

But Rashford's poor showing summed the Red Devils up, with Solskjaer's side second-best throughout the majority of the contest.

Once again, Aaron Wan-Bissaka was exposed.

He's improved over the past two seasons but, this term, all of the former Crystal Palace star's evolvement is being undone.

Wan-Bissaka was poor as Watford took the lead, with King prodding home from close range after he'd failed to close him down.

And he offered precious little going forward, either.

Gone are the days where comparisons with Trent Alexander-Arnold were being made. And it's clear that Wan-Bissaka now pales in comparison to the brilliant Liverpool star.