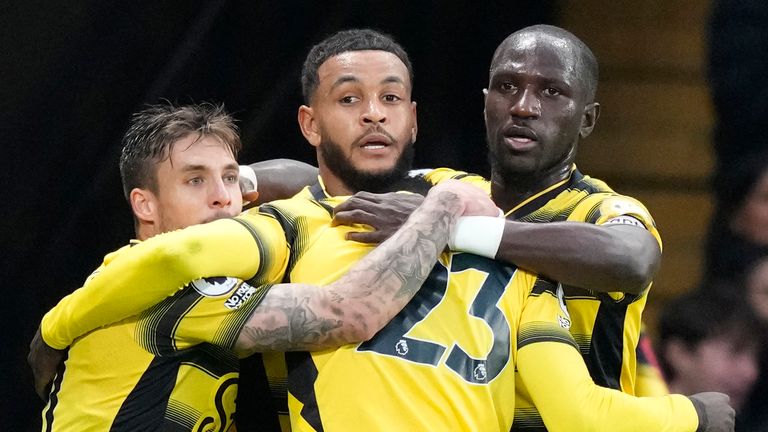 Manchester United's shambolic defeat against a Watford side not flattered by a 4-1 scoreline ramped up the pressure yet further on manager Ole Gunnar Solskjaer.

If there are more questions left to be asked about Solskjaer's future at Old Trafford, they will now be raised after a fourth defeat from five against a Watford team who had not won at home since the opening day of the season.

United could easily have been behind inside six minutes after Scott McTominay's clumsy foul on Josh King gave Watford an early penalty, but Kiko Femenia's goal on the rebound from Ismaila Sarr's saved spot-kick was ruled out for encroachment, and Sarr was again denied by David de Gea from the retake.

Watford did not have long to regret their missed opportunity. Emmanuel Dennis teed up former United trainee Josh King to prod home (28) as the hosts pressed home their dominance, and Sarr doubled the advantage a minute before the break with a powerful finish.

Donny van de Beek, whose name had been cheered by the United fans for long periods of the first half, was introduced at the break and made an instant impact, nodding home from Cristiano Ronaldo's flick five minutes into the second period.

But United's discipline would again let them down again as Harry Maguire dented any hopes of a comeback when shown a second yellow card for a late challenge on Tom Cleverley after being caught in possession.

In injury time, goals from Joao Pedro and Emmanuel Dennis piled yet more misery on the visitors as they sunk without trace, in a capitulation perhaps worse than recent defeats to Liverpool and Manchester City, and one which could provide the final straw for Solskjaer's position at Old Trafford.

Watford travel to Leicester a week on Sunday, due to the Foxes' Europa League involvement; kick-off at 2pm.