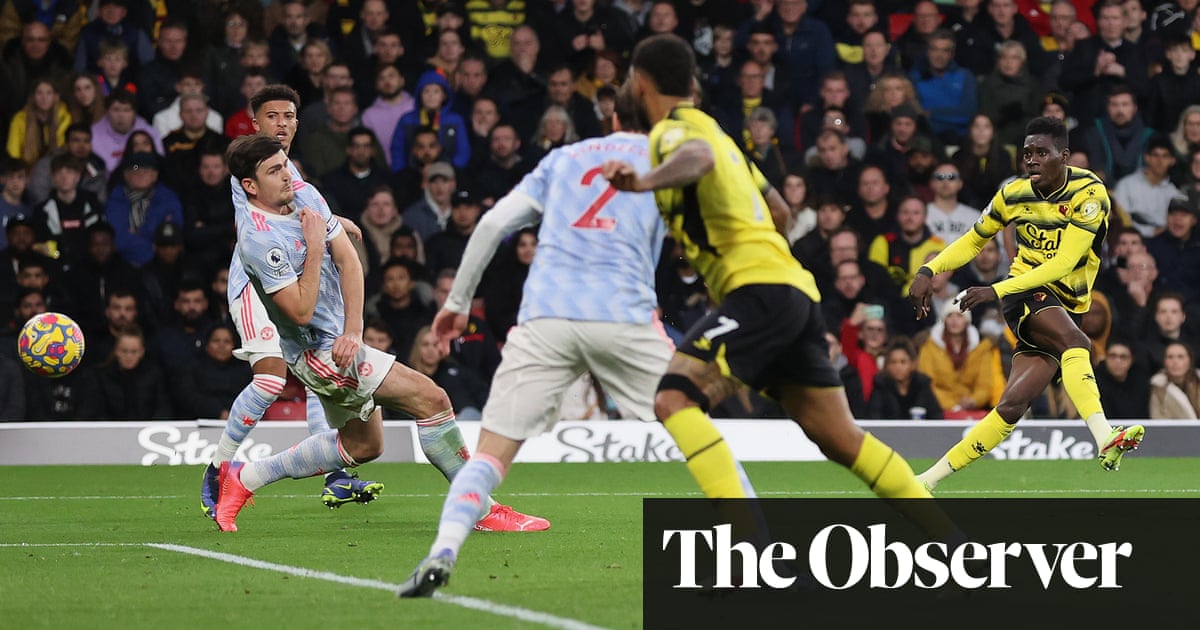 This time there was to be no rescue act and, instead, the gruesomeness that is present-day Manchester United was exposed anew. On another day they would have pulled the wool over everyone’s eyes again and overhauled Watford’s half-time lead, as seemed likely when Donny van de Beek scored soon after his introduction.

Instead this was another humiliation: a derelict, disastrous performance that was met head-on by a barnstorming display from Claudio Ranieri’s team. It was the kind of showing that gets managers sacked and then some, so nobody can be surprised if that is Ole Gunnar Solskjær’s fate now.

Joshua King and Ismaïla Sarr, who had already missed a twice-taken penalty, ensured they received their just deserts before the substitute João Pedro and Emmanuel Dennis both compounded the embarrassment in added time. Harry Maguire’s 69th-minute dismissal was entirely of a piece with the shambles that bookended it.

The only surprise by half-time was that United were not more than two behind. They were abject and their sluggishness had been exposed repeatedly before Aaron Wan-Bissaka, invited to deal with a routine Kiko Femenía cross at the far post, looped a poor header towards Dennis. The Nigerian forward shifted the ball on to his left foot and arrowed across a centre that King, timing his intervention perfectly, swept first-time under David de Gea.

Watford had only scored in one of their previous five games but United could not say they had lacked prior warning. They had no answer to the hosts’ pace and aggression in the opening half-hour and could have been beyond hope by the time King struck. It was equally troubling that they should have found themselves further in arrears before Sarr raked a sublime second. He had plenty to do when found wide on the right of the area by Femenía, even if his isolation spoke eloquently of United’s defensive negligence, but made light of the task by blasting low into the only far-corner spot De Gea could not reach.

It was a marvellously confident finish, especially in light of what had passed. The sheer chaos surrounding Sarr’s penalty blunders, which took place across a bizarre five-minute sequence early on, had seemed to encapsulate both clubs’ seasons. It was the strangest of concessions, brought about when Bruno Fernandes horribly miscued his attempt at a volleyed pass after receiving a throw-in. When the ball came down King was through, only to be hauled down by a sprawling Scott McTominay. The loose ball should have been buried by Dennis, who scuffed wide, but Jonathan Moss called play back for the spot kick.

A straight runup from Sarr boded ill and De Gea parried his first attempt, low to the left, only for Femenía to blast the rebound beyond him from an angle. Watford’s joy was tempered: Femenía had been suspiciously quick to the punch and VAR resolved he had been a yard inside the box when Sarr took aim.

The laws stipulated Watford would be allowed a second go despite Maguire’s protestations, but Sarr looked no more convincing the second time around. His kick, struck more firmly but closer to De Gea, was repelled by the keeper’s trailing left hand.

United must have thought they were off the hook but Watford had only just started. Credit must go to Ranieri’s players for the way they tore forwards, even if their opponents were utterly abysmal. Maguire had made two goal-saving challenges before King scored, the second after an error by Nemanja Matic; he would make another on King prior to Sarr’s strike. De Gea also had to keep out a King header and United’s sole attacking contribution before the interval was a half-volley from Marcus Rashford, offered at 1-0, that Ben Foster saved well.

Rashford did not appear for the second half and nor did the sloppy, booked McTominay. Van de Beek’s emergence from the tunnel before the restart kept the away support interested and, within five minutes, the roars that greeted him were justified. His first club goal in 14 months was a simple finish, nodded in after Cristiano Ronaldo had headed Jadon Sancho’s delivery across the six-yard box, but the stage now appeared set for a familiar salvation plot.

Ronaldo looked certain to deliver it but, sent clear by Van de Beek, saw his blast deflect over off Foster’s shoulder. Although De Gea blocked from King, the tone had shifted sufficiently that Watford were largely on the back foot. Nonetheless United’s goal threat was hardly constant and, with proceedings starting to drift, they were dealt another self-inflicted blow.

Maguire had only recently been booked when, dithering on the ball 10 yards outside his box, he was dispossessed by Tom Cleverley. His doomed attempt at a recovery sent the Watford midfielder tumbling and earned him a second yellow card; United would play the final quarter a man short and the episode had summed up their display.

So did their only remaining chance, a Fernandes shot that ballooned over. Pedro and Dennis then both beat De Gea from narrow angles at the death; a disconsolate Solskjær was met with boos after the whistle.