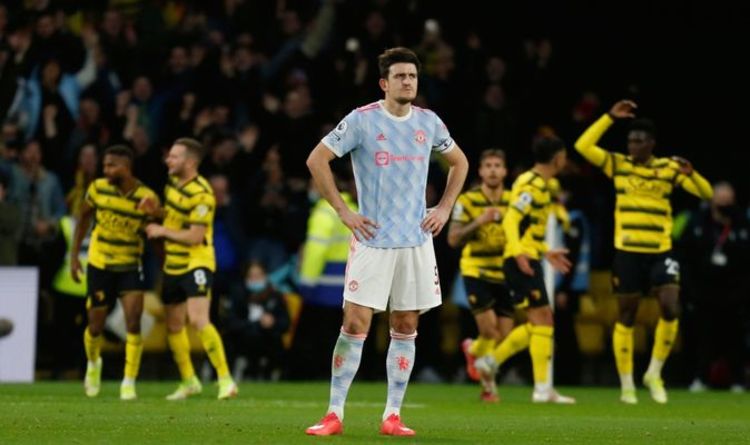 Manchester United's season set became even worse in their game against Watford on Saturday as they went two-nil down to lowly Watford at Vicarage Road to pile the pressure on Ole Gunnar Solskjaer. And with Harry Maguire being sent off midway into the second half with the score at 2-1, the United captain vented his frustations by throwing his armband at a perplexed Bruno Fernandes to cast even more doubt on the atmosphere at Old Trafford.

Harry Maguire has been under-par for Manchester United this season (Image: GETTY)

United quickly realised they were in danger in Hertfordshire after just half an hour in yet another poor Premier League performance.

After conceding a penalty after just ten minutes, the Red Devils were let off the hook after the initial penalty was tucked way via a rebound but disallowed.

Ismaila Sarr missed the retake to give United temporary reprieve, although a goal by former man Joshua King after 28 minutes meant United slipped into yet another rut.

A goal by Sarr put Watford two to the goal, yet Donny van de Beek's strike set the score poised at 2-1 midway through the second half.

It appeared there may be a chance to push for an equaliser, yet Maguire's red card seriously hampered United's chances.

And the Sheffield-born defender vented his anger by ripping off his captain's armband and throwing it directly at Bruno Fernandes, who could only look on uncomfortably.

United's defensive woes have been extremely heightened over the last few weeks, having conceded five to Liverpool and what should have been more than a paltry two at home to Manchester City.

A stat emerged after Watford's opener detailing their frailties, with the Red Devils having kept just two clean sheets in their last 25 games.

It is a far cry from last season with the club comfortably finishing second in the league and reaching a Europa League final.

But the incident only adds fuel to the fire over Ole Gunnar Solskjaer's future with the dressing room atmosphere at an all-time low.