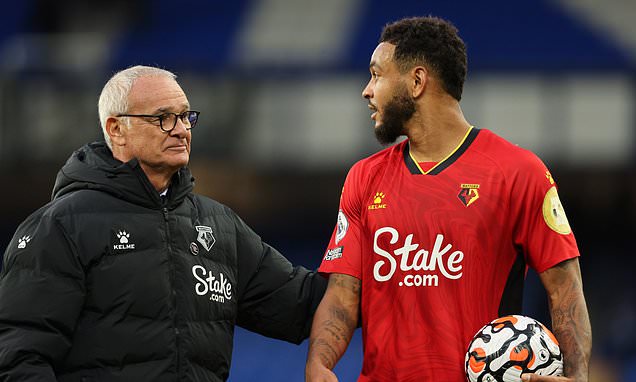 Claudio Ranieri had a twinkle in his eye as he made it clear there would be no grand celebration of a landmark win.

‘Dinner? No, no,’ the urbane Italian said with a smile. ‘We can have a dinner in Watford’s canteen. I will only buy dinner when we keep a clean sheet!’

Ranieri might have been doing his best to keep expectations in check and reminding his squad there is still plenty of room for improvement, but privately he must have wanted to whisk his new squad to Mayfair following their exploits on a remarkable afternoon.

The side who seven days earlier had looked dead and buried after being blitzed by Liverpool responded in devastating fashion.


The late rush of goals gave the scoreline a dramatic look but what could not be ignored was the fact that Watford looked well coached.

With Josh King returning to haunt Everton — he barely kicked a ball for them after arriving on loan from Bournemouth but kicked them in the stomach here with a hat-trick — Watford had a cutting edge but, more than anything, they had belief.

Ranieri is too long in the tooth to get carried away by one outstanding performance but it felt like the efforts of this day will carry them a long way.

‘I spoke to the players with my heart,’ said Ranieri, explaining how he lifted the mood following the 5-0 defeat by Liverpool. ‘When Atletico Madrid lost 3-2, I told my players, “Hey! Atletico are one of the best in the world, they do not concede like this — so it can happen (against Liverpool)”.

‘I told them we had to fight. I’m very pleased with what we did. I’m very, very happy. I did not have Joshua King against Liverpool, this week I did. He made a fantastic difference.

Though Everton led twice, they never looked comfortable. Still, what happened in the final stages was disgraceful.

This is an Everton team who are prone to collapsing — it has happened two or three times a season for the last five years — but this was an affront to their supporters.

Watford just had to be patient and organised, and once they had secured parity for the second time, they trampled all over Everton to leave Rafa Benitez — who, for the first time, was barracked by a section of the Goodison crowd — fizzing with frustration.

There was discord as Everton fell apart, with some fans chanting, ‘Off! Off! Off!’ at striker Salomon Rondon when he was booked while others targeted major shareholder Farhad Moshiri, sporting director Marcel Brands and chief executive Denise Barrett-Baxendale.

This is not a club in harmony and trying to plot his way through this minefield will test Benitez to the limit.

‘We have made some mistakes and you can understand the frustration of the fans,’ said Benitez. ‘But we have to make sure we change and keep the fans on board because they are really important for us. And we have to ensure we show the same commitment we have shown in every game, but more character, more personality when we have to manage difficult situations.’