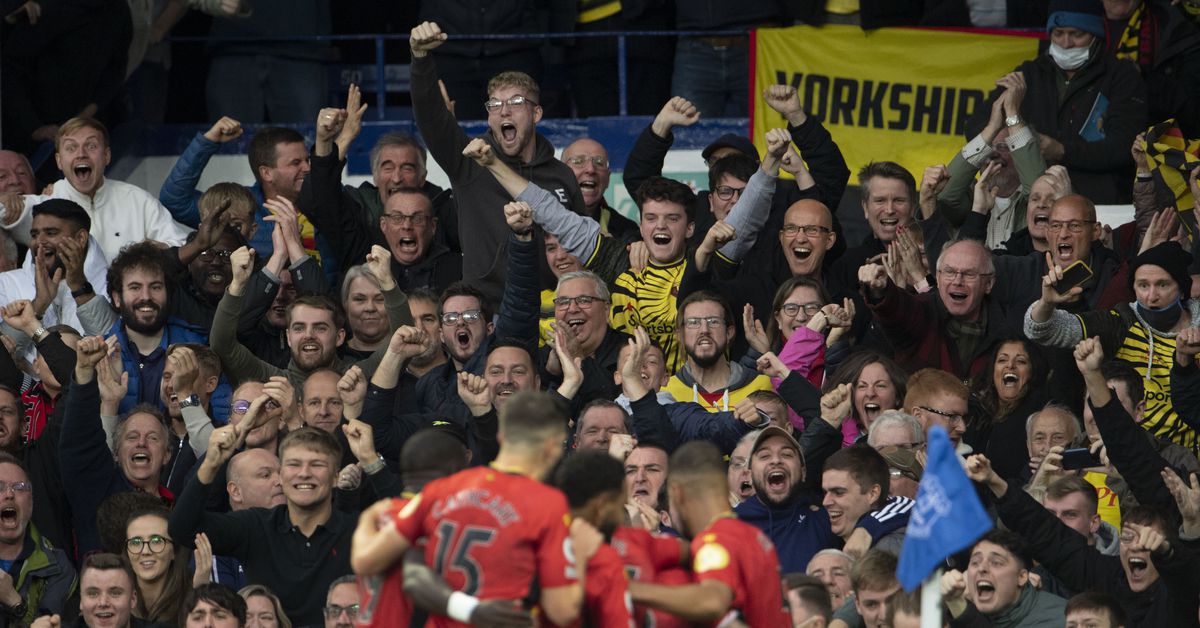 As 38,832 fans plus me and my son Dan took our seats at Goodison yesterday there was a sense of anticipation, a bit of a weird atmosphere if I’m honest. The fact that we were missing key players Abdoulaye Doucoure, Yerry Mina and also Richarlison (only on the bench) as well as the continued absence of centre forward Dominic Calvert-Lewin put a lot of onus on the incoming players, two local boys Tom Davies and Anthony Gordon.

Very early on fine work by Gordon, continued by Demarai Gray saw Davies become an unlikely early scorer. I turned to my son and said “there’s goals in this, they’re awful”. For clarity, I meant Watford were awful.

There’s an irony that won’t have escaped many supporters during this game. For five months or so last season we had a deputy arrive for Calvert-Lewin who had barely played in a lower league for the previous 4 months and who arrived looking unfit, sluggish and dare I say it very unlikely to score. He didn’t although in fairness he played only 137 minutes across 11 games. His name was Josh King. Yesterday, a slimmed down and hungry King was eager to prove his previous club wrong by releasing him and not giving him a fair crack of the whip. He did.

This season we have a new deputy for DCL and I’ll leave you to figure out the irony from what I’ve said above about King when you compare his performance yesterday against Salomon Rondon. Make no mistake, spending two years in a vastly inferior Chinese league with only a brief sojourn in another inferior league (Russian) with Dynamo Moscow last season as Rondon did would dull the senses of the best footballers. I’ll leave it there .... but after seven appearances I am not seeing signs of improvement. It’s almost a cruel “watch”, cruel to expect too much and cruel on the eyes.

Fellow fans will already be sick of analysing where it all went wrong against Watford and also why it is said to be a mystery to Rafa Benitez. Without breaking down every mistake because that also is painful, suffice to say that many schoolboy football players would be upset if I referred to “schoolboy defending” being responsible for all the Watford goals. From slack marking, defenders tripling up against one attacker and still losing out on two occasions, diving in leaving the team short-handed, buying more dummies than a mannequin collector to a ridiculous attempt to knock and run past an attacker from inside our own area. A bad day at the office or should I say playground?

There were a few positive signs in the performance of Gordon who was the only individual to escape the personalised booing at the finale and also Richarlison’s reappearance, well taken goal and energy. Both Michael Keane (nice assist) and Seamus Coleman showed some reasonable form but both also could have done better.

Without picking on anybody else because it’s not helpful and as a fan I want my team to do well, let me just try to voice the opinion of many people I have spoken to.

Evertonians will forgive anything but lack of effort or what they perceive as players being “gutless” or letting their heads go down. It’s the difference between being a schoolboy/ amateur player and being a professional where you have to play whatever the circumstances. Put simply it’s their job. 38.834 fans saw examples of those bad traits yesterday. A very small percentage of those fans were still inside the ground at the final whistle and made their feelings known. It’s the only reason they had stayed put in the stadium.

Finally, a thought for those who didn’t play on Saturday but were fully fit. You’ve been set a low bar by the performance against the Hornets, grasp it and to the younger players training with the first team squad your time will come and the fans will be behind you as they were with Gordon. Those who were clearly not fit in the starting XI yesterday should be given a break whether it’s because they’ve suffered from lack of top level football or because of personal illness. It’s not the end of the world, they’ll be back strong again. Just ask Josh King!