‘Wow’: Some Liverpool fans love what these Watford fans have done as footage emerges
HITC 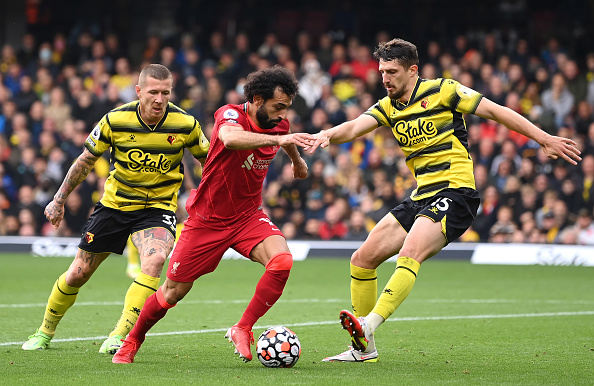 Well, as you may have seen, the £34m Liverpool man waltzed through the entire Watford backline at Vicarage Road, before curling the ball beyond Ben Foster.

It was certainly a Goal of the Season contender, and instead of reacting with anger, some Watford fans couldn’t help but appreciate the strike.

You can see footage of the moment below.

Mo Salah even had the Watford fans appreciating his brilliance 👏pic.twitter.com/a4FY5uC0Wb

Wow – that doesn’t happen often. Only a moment of magic will make an opposition fan do that.

In our view, it was nice to see the Watford fans applaud, even if some supporters may have had an issue with them doing so.

Yes, we all support a club, but we’re also football fans in general – if you can’t appreciate a goal like that, you won’t appreciate much else.

In seven appearances against the Hornets, the 29-year-old has scored nine goals while also providing three assists.

12 goal involvements in just seven outings is a special record, to say the least.

In all honesty, it’s nothing personal – Salah causes major problems for most Premier League teams.

The Egyptian also has nine goals against West Ham to his name, in eight appearances.

Salah has also scored eight goals against Tottenham and Bournemouth – all of these sides must simply hate facing him.

For now, let’s see what the Liverpool fans on Twitter have been saying about Watford fans applauding their prolific No.11…

That’s when you know you’re the king, other teams fans clapping for you.

U stand up for the king

Very few gets that 👏

In other news, 'We can't catch a break': Some Arsenal fans rage over what Arteta had to say on 13-cap ace