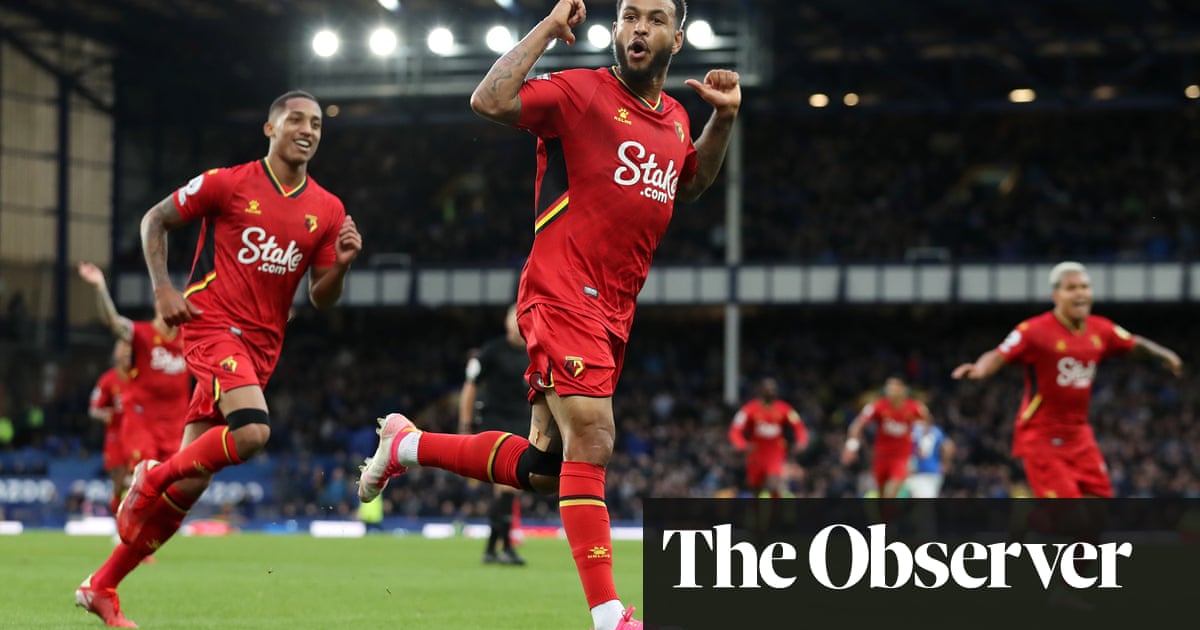 Eleven games. That is how long it has taken for Goodison Park to turn on Rafael Benítez’s Everton. Only those who did not watch this truly shambolic performance would call that impatient.

Watford, routed 5-0 by Liverpool in Claudio Ranieri’s first game in charge one week ago, inflicted a five goal humiliation on Benítez’s other Merseyside charges thanks to a hat-trick from former Everton striker Josh King and what must be one of the worst defensive displays the Spanish coach has ever overseen. Watford scored four goals in the final 13 minutes, walking a few of them in as the home rearguard evaporated. Earlier, Goodison had roared its disapproval at young Anthony Gordon being substituted and greeted Alex Iwobi’s arrival with jeers. This was the day Everton’s majority shareholder Farhad Moshiri, looking on from he directors’ box, must have privately feared when making his controversial managerial choice in the summer.

All credit to Ranieri, however. His team could have folded after conceding inside three minutes but were unrecognisable by the time they departed with King proudly carrying the match ball.

Ranieri and Benítez first opposed each other in 1998 when in charge of Valencia and Extremadura respectively, although struck up a friendship several years earlier when the Spaniard studied the Italian at work in Fiorentina. Their friendship endures to this day, and the pair enjoyed a warm embrace before kick off. Demarai Gray also went in for a pre-match hug with the manager who orchestrated their Premier League title triumph at Leicester in 2016 but sentiment went no further as he proceeded to complicate Ranieri’s current task with merely 128 seconds gone.

Benítez made two changes to the team beaten by West Ham last Sunday. Tom Davies replaced the injured Abdoulaye Doucouré and Anthony Gordon was rightfully restored to the starting line-up in place of Alex Iwobi. The academy graduates were central to a sharp and encouraging start by Everton, and it was Gordon who instigated the quick breakthrough by releasing Gray in space down the left. The former Leicester winger turned William Ekong inside and out before crossing low to the near post where Davies, sliding in among the challenges, steered the ball beyond Ben Foster. It was the midfielder’s first Everton goal since December 2019 and the worst possible start for a Watford team that came into the game with one win in seven matches and fresh from a mauling by Liverpool last weekend.

Another felt likely in the early stages with Everton a threat whenever they got the ball down and both Gordon and Gray prominent. Davies and Gordon combined well to create an opening for Andros Townsend. Ben Foster parried the winger’s shot out to Seamus Coleman, who returned a tantalising cross into the area that Gordon headed wide with the goal beckoning.

Everton were in control, Watford fragile, only for the pattern of the game and the mood inside Goodison to turn following a needless foul by the out-of-sorts Lucas Digne on Ismaïla Sarr. Adam Masina swept the resulting free-kick over three Everton heads in the penalty area, Craig Cathcart flicked on and King, unmarked at the back post, converted into the roof of the net. Referee Graham Scott initially disallowed the goal for offside but the decision was overturned after a lengthy VAR review. The irony of King scoring was not lost on the home crowd. The Norway international failed to score in 11 appearances for Everton last season and his last Premier League goal came on the day Bournemouth were relegated here in July 2020. Prolific at Goodison, just not in an Everton shirt. Benítez seethed at conceding from a set piece for the second home game in succession.

Suddenly it was Everton who were uncertain and overly cautious. Moussa Sissoko drilled wide from 30 yards and Cucho Hernández’s curler towards the bottom corner was diverted to safety by Ben Godfrey as the visitors drew confidence from a woeful Everton defence. It didn’t help that Goodison’s patience - a virtue that Benítez has repeatedly praised throughout his short tenure - snapped.

There were loud cheers when Richarlison stripped off in readiness for his first appearance in almost six weeks. They turned to widespread boos when the crowd discovered that Gordon, one of the few effective players in blue, was the person being replaced. Within three minutes it seemed Benítez’s decision would be vindicated when Richarlison restored Everton’s lead against his former club with a diving header from Michael Keane’s cross. It proved an illusion as Everton’s defence disintegrated before a disbelieving and increasingly enraged home crowd.

The impressive Juraj Kucka equalised with a towering header from Hernández’s corner as Everton conceded from yet another set piece. He almost repeated the trick moments later. By then, King had swept Watford ahead when substitute Emmanuel Dennis found him unmarked inside the penalty area, giving the striker time to control and beat Jordan Pickford with an emphatic finish.

King’s hat-trick was straight out of Sunday league. Godfrey and Allan, both dreadful, ran into each other when attempting to complete a routine clearance inside their own penalty area. The loose ball spun to King, who had time to step inside Keane and beat Pickford with ease. Everton’s ignominy was not yet complete. In stoppage time Dennis, like King before him, was left with the freedom of the penalty area to collect a right wing cross and find the bottom corner. Ranieri had conjured a remarkable revival inside a week, aided and abetted by his hosts however.