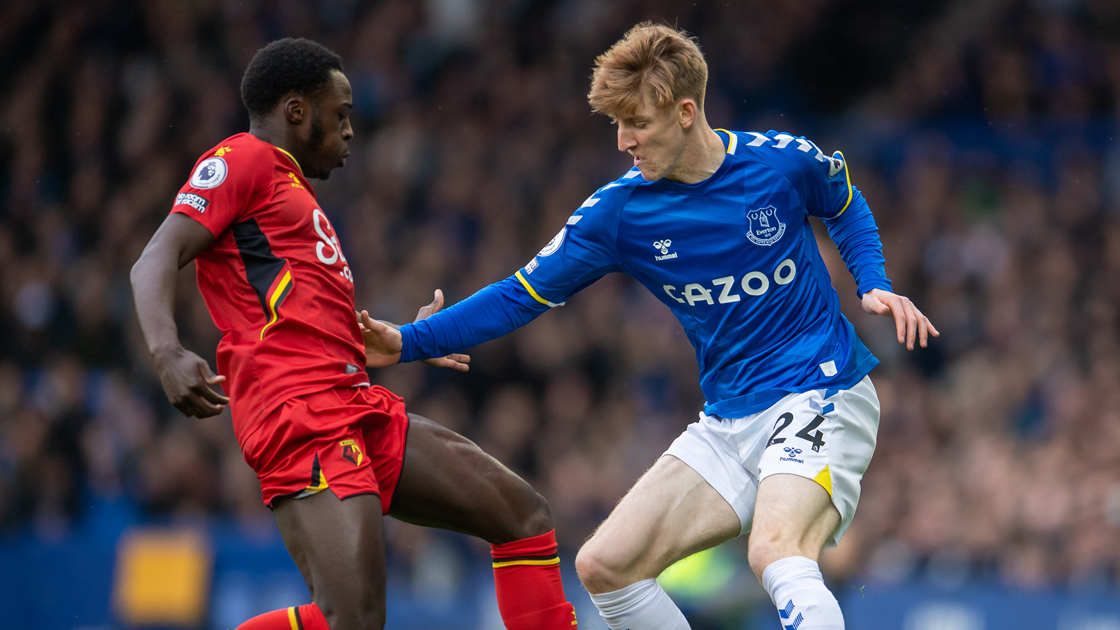 Everton fell victim to a late flurry of Watford goals to go down to defeat at Goodison Park and miss an opportunity to climb into the Premier League's top-four.

The home team led 2-1 with 12 minutes remaining after Richarlison marked his return to fitness by coming off the bench to power in a header from Michael Keane's cross.

But Watford levelled when Juraj Kucka headed in from a corner on 78 minutes. Joshua King, who scored his team's equaliser after Tom Davies put Everton in front on three minutes, struck his second to put the visitors in front.

King completed his treble to put Watford out of sight on 86 minutes and Emmanuel Dennis struck the visitors' fifth in the first minute of stoppage time.

Everton stay eighth in the Premier League at full-time and have eight days before visiting Wolverhampton Wanderers in their next top-flight fixture.

Everton began brightly enough, Anthony Gordon in particular showing up impressively on his return to the team. The young forward had already showed intent to run at Watford when he powered forwards on two minutes.

Demarai Gray took over to tie William Ekong in knots, the Watford centre-half indecisive and eventually finding himself the wrong side of the forward, who directed a cross along the floor to the near post.

Davies’ eyes widened, sighting the opportunity for a first Premier League goal since November 2019. The midfielder, making his first league start of the campaign, propelled his frame at the ball to apply a gossamer touch across Ben Foster and into the far corner.

Everton  threatened to overwhelm their visitors for a spell.

Gordon carried the ball forwards again, swapping passes with Davies, before feeding Andros Townsend for a thundering drive Foster beat out to his left.

Seamus Coleman was immediately on the case, retrieving the ball on the right flank and hanging up a cross that Gordon headed past Foster’s right post.

Watford at this juncture were merely trying to keep their heads above water. That changed with the award of a free-kick on Everton’s left when Lucas Digne was penalised for a challenge on Jeremy Ngakia.

Adam Masina whipped in the free-kick, flat and hard. Craig Cathcart helped it on and King snuck in at the back post to ram the ball high into the net.

Evertonian displeasure gave way to relief that was almost as quickly replaced by dismay, as the goal was chalked off until a VAR review, which understandably given the tight nature of the call seemed to take an age, determined the goal was legitimate.

Replays indicated Gray’s back foot might have been level with King but it really was hard to be certain.

The game had followed a pattern until this point, Watford attempting to resist Everton’s forward flow and struggling to contain the hosts on the flanks.

With their goal for sustenance, however, Claudio Ranieri’s team visibly grew in confidence and stature.

Neither team could lay claim to having control of an increasingly open contest.

Digne controlled Ben Godfrey’s rifled pass tight to the left touchline and in one slick movement rolled the ball into Gordon, bursting into Watford’s penalty area.

The attention from Kucka was tight and there was no doubt over the contact on Gordon’s back. Not enough, however, for Graham Scott, the referee, to point to the spot.

Watford either fancied their chances with efforts from distance, or events unfolded to make the option irresistible for a handful of visiting players.

Moussa Sissoko’s hit was the pick of the bunch, a shot from 25 yards the screamed narrowly wide on the left side.

Ismaila Sarr thrashed off target after a corner was only partially cleared. The same player was wayward against when choosing to take aim from 25 yards following a Watford counter-attack, launched after Cathcart cleared a Coleman cross with Salomon Rondon drawing back his neck and ready to put his head through the ball.

Townsend dragged his right-footed effort wide after evading Kucka at the edge of the box on 22 minutes and around the half hour Masina intercepted crucially with Gray poised to fasten onto Keane’s lofted ball from the back.

Cathcart threw himself in the way of a Gordon effort on 45 minutes and, in stoppage time, Kucka collected Hernandez’s ball infield to dodge Allan but fire high.

Gordon began the second half much like the first, carrying the fight to Watford. Cathcart took the sting out of one goalbound shot and there was nothing doing when Gordon went down in the box following a challenge from Ngakia.

Watford appeared to have reined in their attacking ambition until minute 58 when Ngakia escaped down the right.

The cross was low and met by King, who turned it goalwards first time, only to be thwarted by a fabulous reaction stop from Jordan Pickford.

Everton keeper Pickford tumbled to his right to push out a drive from Kucka six minutes later- by which time Richarlison had arrived to transform the game.

Keane was wide with a header from a Digne free-kick with 16 minutes remaining. And Everton really wanted the luxury of another goal because pesky Watford weren’t going away.

Ranieri’s side were feisty, increasingly strong in the challenge and, in substitute Dennis posed a consistent threat on Everton’s left.

The equaliser came from that area of the field but via a set-piece after Keane forced the ball behind to nip a Watford raid in the bud.

Hernandez swung in the set-piece and it was met with force by Kucka, the Slovak international midfielder’s header directing the ball inside Pickford’s left post.

Two minutes later, the away team turned the scoreline on its head. Dennis had room to cross from the right and he picked out King to the left of the penalty spot.

The Norwegian controlled and lifted an excellent finish into the top-right corner. King completed his hat-trick with four minutes remaining, gathering possession after the ball pinged around Everton’s box, wrong-footing Keane and striking beyond Pickford with his left boot.

And Dennis completed the scoring when he collected a ball delivered from the right by fellow substitute Joao Pedro to slot into the bottom-right corner.