Everton vs Watford: Tactical Preview | False 9 could be the key
Royal Blue Mersey 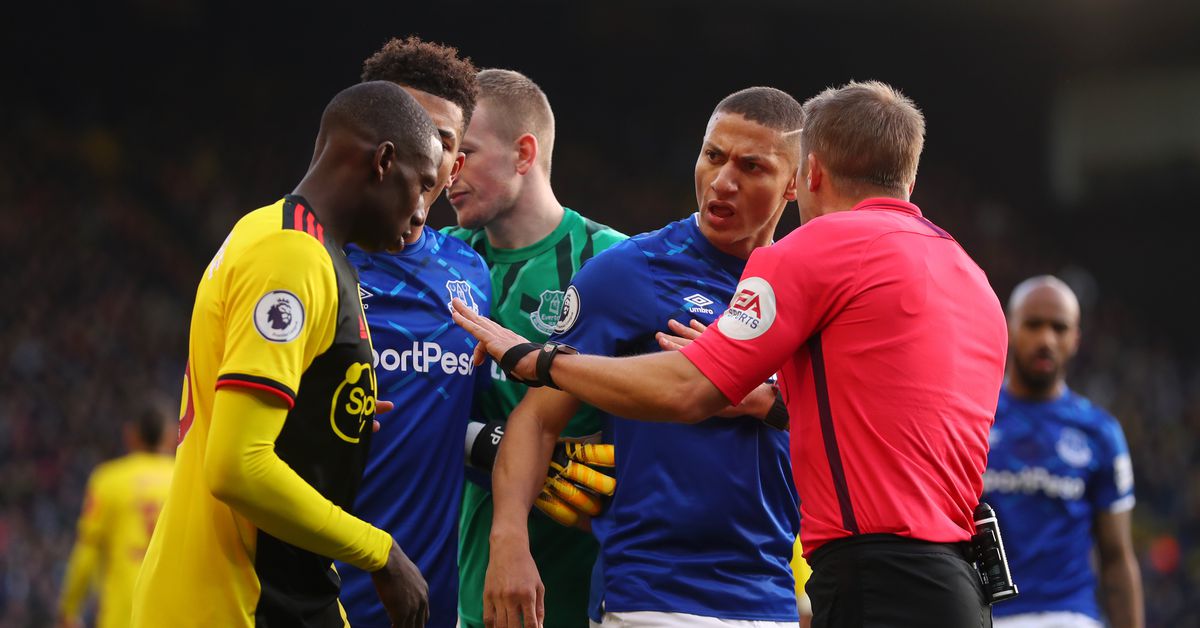 Everton look to bounce back from a poor display at home to West Ham United with the visit of Claudio Ranieri’s Watford. The Hornets find themselves in 16th place and in true Watford fashion are currently already their second manager of the season. They come into this game off a heavy 5-0 defeat to the Reds across the park but without a win in four games it’s not looking great for them this season.

Watford have the worst xG in the league, even below Norwich City who have only scored twice so far this season. This really highlights the lack of creativity in the side with their most effective creator so far this season, Joshua King, topping the assists chart for Watford with two. King has been out injured for the last couple of games, but he looks set to return to face his (temporary) former club this weekend.

Due to the Hornets lack of creativity, they are also bottom of the number of shots attempted, with only 78 in their 8 games this season. The average distance of these shots is 18.1 yards meaning they have been restricted to taking potshots from outside of the area. 20 out of those 78 shots have come from Ismaila Sarr who is undoubtedly the man we have to keep quiet at Goodison Park on Saturday.

Watford have only scored seven goals, with three of them coming on the opening day at home to Aston Villa; Sarr has managed four himself from an xG of 2.1, and is fifth in the league for successful dribbles and possesses a lot of pace which could trouble Lucas Digne. Sarr is a traditional right-footed, right-sided winger, who rather than cutting in onto his stronger foot like a lot of modern-day wingers, likes to get at his man one-on-one going on the outside. He likes to knock it past his man into the space behind the full back to be able to use his pace.

This is where I think playing Ben Godfrey at left centre back may by the key to nullifying this threat. Although struggling with the after effects of Covid, the defender himself has a lot of pace and his recovery runs on the left side may be vital in helping to protect Digne this weekend. With only 72 crosses attempted, the third lowest in the league, we shouldn’t have to worry about an aerial threat as Michael Keane should have enough to deal with their attacks. Sarr is the second most fouled player behind Wilfred Zaha and with our vulnerability from set pieces so far this season, we must be careful to be conceding silly fouls near our own area.

Last weekend, Liverpool’s 4-3-3 setup with a false nine in Roberto Firmino was very effective. The Brazilian would drop into the space between the defence and midfield which would often drag out one or two Watford centre backs completely out of position, exploiting space in behind for their pacy wingers to run into. This is a setup I believe that could work for Everton this weekend. With our own Brazilian Richarlison set to return from injury and Salamon Rondon failing to set the Premier League alight so far, we could see our number seven occupying the striker role.

Richarlison himself loves to drop in when playing alone up top which could see attacking runs from Demarai Gray and Andros Townsend causing the Watford defence problems. Against Liverpool they played with a five at the back system but their right wing back Kiko Femenia was often caught in advanced positions leaving a large hole for Sadio Mane to run into. Femenia is injured and doubtful for this game which could cause Ranieri even more problems.

This tactic is something Everton have exploited a lot this season when playing against attacking full backs. We’ve counter attacked with Gray down on our left and this is another area we can exploit on Saturday. This could also be similar on our right-hand side against Danny Rose, who has been dribbled past twelve times this season from just five games.

As I mentioned in my @RBMersey preview, Cash often plays extremely high up the pitch especially in a system with wing backs. Gray stayed high and pulled out wide to exploit this space and use his pace. pic.twitter.com/ELCDlRgLHp

One man we’re unfortunately going to be without is former Watford man Abdoulaye Doucoure. The question on most Everton fans’ lips is who’s going to replace the player who in my eyes has been our most important man this season. Not only for his work rate and defensive work but his attacking play has improved so much this year and he’s going to be a huge miss. If fully fit, I’d like to see Jean-Philippe Gbamin come into the side. A lot of fans forget he was a big prospect when we signed him and we paid a hefty chunk for the midfielder, especially back then. Unfortunately, it seems he’s suffering psychologically with injuries but I’m hoping after a few weeks sitting on the bench he has the motivation and drive to play this one. He will offer us a bit of height and fight in that midfield which may see Allan playing in a slightly more advanced role.

Due to losing the legs of Doucoure I wouldn’t be surprised to see Rafa add another midfielder in there, with Tom Davies, Fabian Delph and Andre Gomes all taking part in full training this week. Also, Tyler Onyango has returned from an injury sustained in April and played a large chunk of the Under 23’s recent win over Leeds. This gives us plenty of options in midfield which could see an attacker like Alex Iwobi sacrificed to give us the extra men in midfield.

This game is a perfect chance for us to put behind last week’s poor performance and with a win potentially putting us into the Champions League places, there should be extra motivation to get the three points. Due to extremely subpar showings all round against West Ham, moving into fourth position will bring a lot of positivity back to Goodison and all will be quickly forgotten. It’s one of the games where it doesn’t have to be pretty, we don’t have to win by three or four goals, just enough to get the job done. Most importantly, I really hope we come out the other side with no fresh injuries and plenty of minutes for Richarlison on his return.