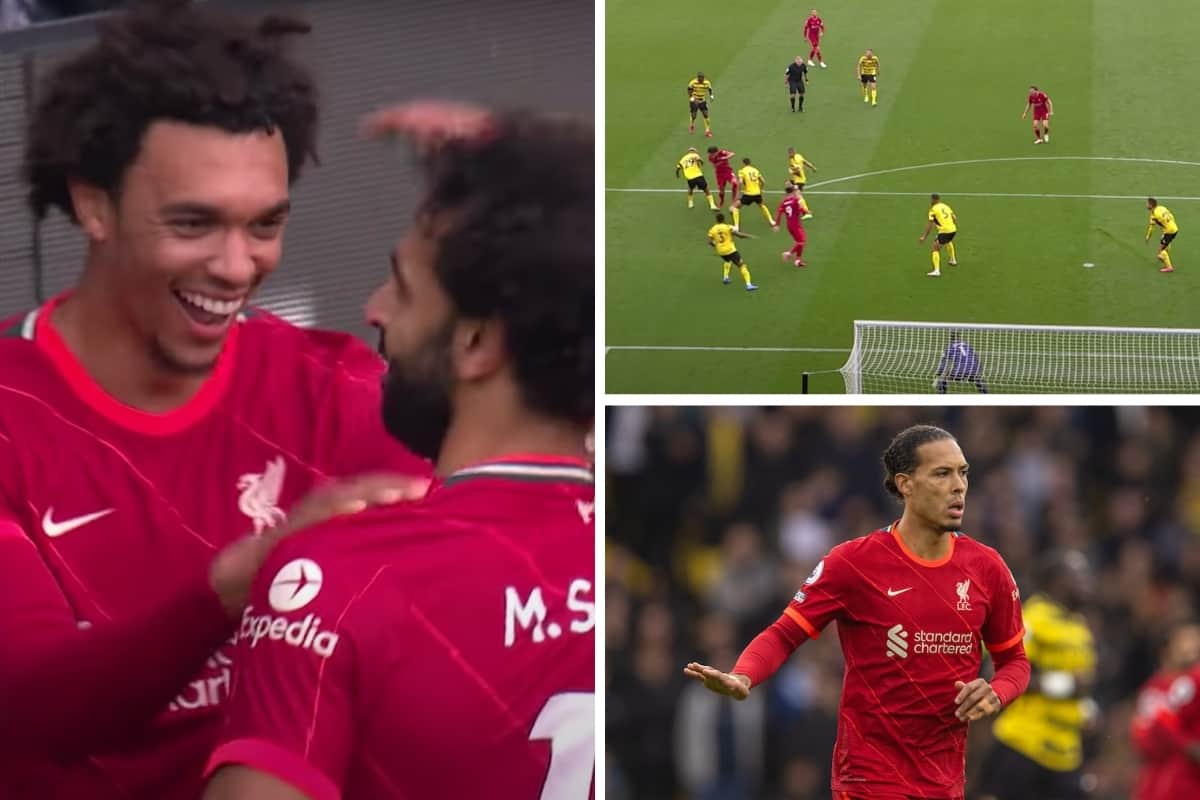 There was not one misstep at Watford as Liverpool turned on their afterburners to notch an impressive 5-0 win, but there was only really one man who was on everyone’s lips.

One for Sadio Mane, one for Mohamed Salah and three for Roberto Firmino, it was a forward’s game and they each seized their moment at Vicarage Road.

But even the Brazilian’s hat-trick could not take the spotlight away from the No. 11, with his perfect assist and out of this world goal rightly dominating headlines.

There can be no more debate as to his standing in world football and with each game that passes Salah is quietening any and all doubters that still linger in the dark.

Watford was another show of his prowess and Liverpool’s as a team with Jurgen Klopp‘s men continuing their impressive unbeaten run which now stretches to 20 across all competitions.

It all left plenty for fans to digest after the victory.

How has he managed that?

The sheer brilliance of Salah’s strike cannot be understated and even Klopp knows “it is not possible for people with normal feet” to be capable of such skill.

And yet the No. 11 is not human and after his jaw-dropping effort against Man City why not add to his best goal debate by adding another of a world-class standard.

It certainly left plenty to digest in the aftermath:

He scored from this ffs pic.twitter.com/WaIXIQHSo9

There's rival fans going to their own grounds and watching Mo Salah play who will, in 10/20 years time, be telling their kids and grandkids about how they got to watch Mo Salah in the flesh.

*Mohamed Salah does anything*
Me: pic.twitter.com/8MnXYnwmx0

How does the saying go, a picture is worth a thousand words:

Find someone who looks at you like Trent looks at Salah…

Virgil van Dijk was certainly missed for more than one reason last season but his disdain for having to move out of second gear was back at Watford and it was brilliant.

His headers to himself and the ease in which he floated across the pitch was a sight to behold and Reds were overjoyed to see the swagger only he possesses return:

Absolutely raging that he had to break into a mild sprint https://t.co/mk6ahASPWJ

Laughed my head off seeing this in the ground with others around me. As Calm As You Like! @VirgilvDijk https://t.co/Rqh0qrII5k

Virg is back to heading the ball to himself again. pic.twitter.com/Flx0DYgJZT

Have really missed the sight of Virgil Van Dijk heading the ball to himself because he’s bored.

And love for Bobby

It has not been the smoothest of times for Firmino in the last couple of seasons but the No. 9 is finding his feet once more and was in all the right places at Vicarage Road.

And three goals made for three Bobby celebrations and there’s nothing quite like it. With six goals in seven appearances so far, there promises to be many more to come:

?? Roberto Firmino is the first Brazilian to score more than one hat-trick in the #PL ??#WATLIV pic.twitter.com/IyEnD7q4xJ

Will go under the radar after Salah's brilliance but Firmino assisted that goal – the 30th time the pair have assisted one another for Liverpool in all comps in the Premier League era – the most of any #LFC duo in this time, overtaking Robbie Fowler and Steve McManaman. #WATLIV pic.twitter.com/GZYVHFCrTZ

A hat-trick that gave off a bit of a bit Dirk Kuyt-esque vibe, don’t you think? But we’ll take it!