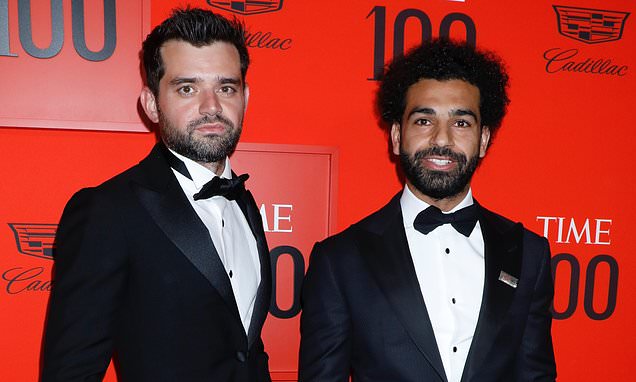 The Egyptian forward put in a show-stopping performance to help Liverpool win 5-0 and even scored his 10th goal of the season with a remarkable solo effort.

Following his impressive display, it is believed that the Colombian agent will continue to negotiate a new £500,000-a-week deal for the forward - who is widely regarded as one of the most important players in Jurgen Klopp's squad.

According to The Mirror, Salah's agent and the club have began initial talks over a new contract for the Egyptian - who is currently on a £200,000-a-week contract that runs until the summer of 2023.


However, it seems likely that Salah will be handed a significant pay rise after the Liverpool manager said the forward was currently on better form than Lionel Messi and Cristiano Ronaldo.

Klopp's remarks came after Salah scored a wonder goal against Watford. He collected a pass from Roberto Firmino on the edge of the box and beat Juan Hernandez, Juraj Kucka and Craig Cathcart to find the back of the net for Liverpool's fifth goal.

Speaking of Salah's performance, Klopp told BT Sport: 'His performance was massive today. The pass for the first goal was great and the second goal was special.

'He is top. We all see it. Who is better than him? We don't have to talk about what Messi and Ronaldo have done for world football and their dominance. But right now, he is the best.'

The Liverpool manager went on to suggest there is more to come from his Egyptian star. He added: 'Salah is in his age where you can still improve, and he's doing that constantly.

'You saw the first goal that he set up for Sadio today, that is an outstanding pass. He brought that, I don't know, from the summer break. After that, he started doing these kinds of things.

'The consistency he delivers, all this kind of stuff, maybe people just now start seeing it - it was always there. He plays for us for five years now but it's absolutely incredible the way he performs since he's here.

'He's in the top, top five since he is at Liverpool pretty much. And now he is the best in that moment.

'The big thing between Cristiano and Messi was that nobody had a doubt about it for years, but Mo is already on the top level for years as well and there's still a lot to come from him because of his desire. He just wants to perform on a top-class level.'

Salah was also hailed as the 'best in the world at the moment' by Steve McManaman. The former Liverpool player placed Salah above Kylian Mbappe, Neymar, Robert Lewandowski and others based on his current form.

The Reds sporting director Michael Edwards will be eager to tie Salah down with a contract extension - having recently agreed terms with Van Dijk, Alisson and Alexander-Arnold

McManaman said: 'He is the best in the world at the moment. I've seen Mbappe, Neymar, Messi - who hasn't played enough.

'Lewandowski has carried on scoring for Bayern but not these type of goals. I can't think of anyone who is playing better football than Mo Salah at the moment.'

Fellow pundit Joe Cole continued: 'There is a massive argument for it (being the best player in the world). Certainly best player in this country. He is in the form of his life. He was a pleasure to watch. The pass for the first goal was outstanding as well.

'He's such a top, top player. you don't appreciate it until you see all the little stuff off the ball. He's so strong as well. Technically he is unbelievable. He reminds me of Ronaldinho, he was freakishly strong.'

As a result, the Reds sporting director Michael Edwards will be eager to tie Salah down with a contract extension - having recently agreed terms with Virgil van Dijk, Alisson Becker and Trent Alexander-Arnold.

Sportsmail previously reported that Liverpool want to extend Salah's contract by a further two years until 2025 in a record-breaking deal for the Merseyside club.

The reported deal means Salah would hold that contract until he is 33 years of age and would extend his Anfield career to eight years.

Such a move would be beneficial for Liverpool - who are looking to add to their trophy cabinet over the coming years.