Has Ranieri walked into a nightmare at Watford?
BBC Sport 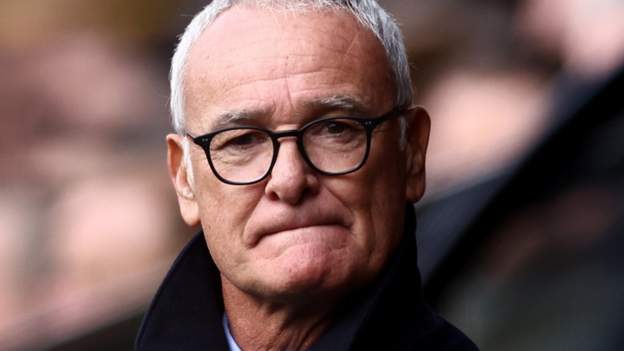 Ranieri lasted three months in his last job in England, with Fulham in 2018-19

Deep in his programme notes for his first game as Watford manager, Claudio Ranieri made a couple of significant points.

Having got his delight at returning to the Premier League out of the way, spoken of the warm reception he had received at Vicarage Road and addressed his new club's brutality at getting rid of managers, he turned to the task at hand.

The first point he made was to state, quite clearly, that "being safe is not a fairytale for Watford". The second was a request: "Stay with us please."

After watching the 90 minutes that followed, it was clear that while it might not be a fairytale, Premier League survival would be a pretty notable achievement for Ranieri given the squad he has to work with. And, if the fans are going to remain onside, they will have to absorb some significant blows before the final destination is reached.

"I saw some bad things but I have also seen some good things," said Ranieri after the 5-0 hammering by Liverpool. "The last 20 minutes we went face-to-face with Liverpool. We should do that from the beginning, but we were very nervous. Some of the goals were presents."

It was a nightmare start for a manager whose most famous achievement is guiding Leicester to a shock title win in 2015-16, but whose most recent Premier League experience came during a relegation season with Fulham in 2018-19.

This was Ranieri's heaviest Premier League loss, and no manager whose first game with a club in the competition came at home has suffered a bigger defeat.

The problem for Ranieri when he watches this game back is that he will see that Liverpool eased off in the final 20 minutes. By that time they were 4-0 ahead, knew it should have been more, and Mohamed Salah had scored a simply sensational goal.

There was more than an element of irony about the standing ovation Watford received for their first corner and their first shot. And while it was very much the reaction of individuals in a crowd that showed their support for Ranieri before kick-off, the sound of booing in the second half was not a good sign.

Ranieri was not without straws to clutch at as he assessed the defeat.

"I know my players much better now I have met them all," he said, acknowledging that taking over at a new club during an international break does not make for the easiest transition.

"It was our first match together against one of the best teams in the world. That is not so easy."

But positives were harder to come by.

"When you play against big teams, the truth is on the pitch," he added.

And the truth is Watford were simply not good enough.

Individually and collectively, they did not do the basics. Whether it was keeping tight to Salah, not allowing Roberto Firmino to drift into space, being combative in midfield or pressing Liverpool's defence, which was screening an inexperienced keeper, Watford fell a long way short.

They may not be in the relegation zone yet, but with a trip to Everton next week and matches against Arsenal, Manchester United, Manchester City and Ranieri's old clubs Leicester and Chelsea by the first week in December, it would be no surprise if Watford approached Christmas mired in trouble.

If he is concerned, Ranieri did a good job of hiding it.

"We know we made some mistakes and we have to improve next week. But we will work this week on trying to correct those mistakes," he said. "I will tell them what happened and slowly, slowly we will try to improve.

"But I am a very positive person and always, my confidence is high."