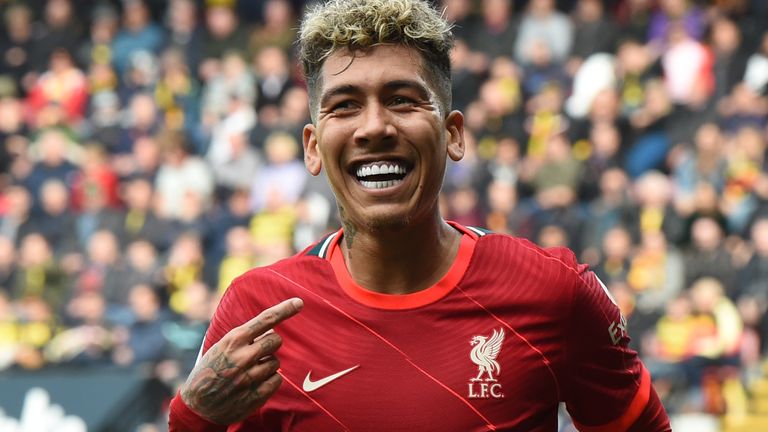 Liverpool made Claudio Ranieri’s Premier League return one to forget as they battered Watford 5-0 with Roberto Firmino grabbing a hat-trick.

There was to be no new manager bounce factor for Watford with Sadio Mane scoring after just eight minutes, setting the tone for a completely dominant Liverpool performance and netting his 100th Premier League goal in the process.

Firmino grabbed the first of his three on 37 minutes from a James Milner cross before Mohamed Salah got the goal his play deserved courtesy of another outstanding individual goal. Firmino tapped home his second on 52 minutes before wrapping up his hat-trick in injury time.

The rampant Reds stretched their unbeaten run to 18 games in all competitions and sit top of the Premier League for the time being.

Man of the match: Mohamed Salah

Image: ...After the game, Jurgen Klopp described Salah as the best in the world...

Image: ...Ben Foster can only watch as the ball curls past him and into the net...

Ranieri was welcomed by the home fans just before kick-off but any hopes of a fast start under the new boss quickly evaporated as Liverpool suffocated the Hornets from the first attack.

Salah struck the bar within two minutes when latching onto a Mane flick but the offside flag meant it wouldn't have counted anyway. The Liverpool right flank was proving fertile ground with Trent Alexander-Arnold and especially Salah giving Danny Rose a torrid time. It wasn't a surprise when Liverpool made their dominance pay inside eight minutes.

Salah spun into space and played a quite magnificent pass in behind the Watford defence and Mane danced through before firing a clinical finish into the far corner to join the 100 club. Of his 100 Premier League goals, this one was just Mane's third from outside the box.

Salah tested Ben Foster minutes later with a stinging drive. Watford just couldn't cope with Liverpool's relentless pressing and quick passing into their front three. With 20 minutes gone, Salah had already had 21 touches of the ball whilst opposite number Ismaila Sarr had only managed one.

Watford tried to hang in until half-time but Liverpool punished yet more sloppy play eight minutes before the break. Adam Masina played a strange ball across the Liverpool midfield and Mane accelerated towards the Watford defence before sliding in Milner down the left. His cross was perfect for Firmino, who couldn't miss from three yards out.

Ranieri replaced Masina at the break with Tom Cleverley called for but it made no difference to the flow of the game towards the Watford goal.

Alexander-Arnold struck one wide from distance before his partner in crime down the left, Andy Robertson, opened up the Watford defence with Liverpool's third goal.

His cross from the left caused Craig Cathcart to divert the ball towards his own goal. Foster reacted quickly to block the ball away but Firmino's poaching instincts were to the fore as he poked home in front of a buoyant away end.

The best was yet to come for the travelling fans as they witnessed another moment of individual brilliance from Salah. With his sensational solo effort in the draw with Manchester City still fresh in the mind, he repeated the trick with another piece of majestic skill.

Three Watford defenders were around him inside the area but he managed to turn them all inside out before firing home a precise finish into the far corner. It was the work of a genius.

Liverpool took their foot of the gas for the remainder which at least allowed goalkeeper Caoimhin Kelleher to keep warm with Sarr testing him with a powerful effort that he pushed onto the post.

But the final moment of the game was left to Firmino, who added gloss to a fantastic team performance when knocking home another tap-in from a Neco Williams centre.

Watford play Everton at Goodison Park next Saturday. Meanwhile, Liverpool face a trip to Atletico Madrid on Tuesday in the Champions League before returning to face Manchester United at Old Trafford on Sunday October 24, live on Sky Sports.