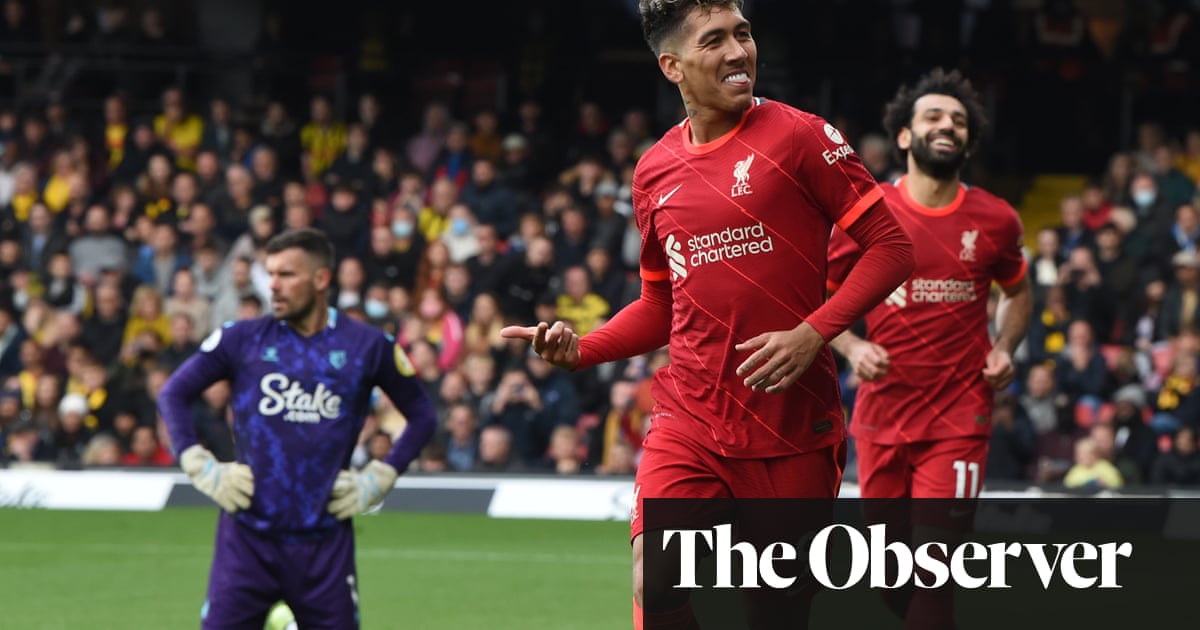 This was as chastening a return to Premier League football as Claudio Ranieri could have feared. His new Watford charges did not offer the slightest resistance to a Liverpool side that purred through one of the most one-sided top-flight matches in memory, the only redeeming feature being that the scoreline was not significantly heavier. There is no shame in being dwarfed for quality by opponents this good but Watford failed to muster any of the energy or blood and thunder that could be expected of a decorated head coach’s debut, a fact not lost on a home crowd that ironically cheered when Juraj Kucka took their first shot in the 55th minute.

While Sadio Mané’s 100th Premier League strike and a timely hat-trick for Roberto Firmino are worthy talking points, the salient theme was that Mohamed Salah is operating on a different plane to any footballer in the division. His goal, Liverpool’s fourth, was another masterpiece and recalled his exhilarating effort against Manchester City. Was this one as good? It had far less riding on it but otherwise the elements were all present: four defenders stood between Salah and Watford’s goal when he took possession just inside the penalty area but, seeing two of them off by rolling his foot over the ball before leaving Craig Cathcart on the floor as he checked on to his left foot, he worked a half-chance. How masterfully he took it, bending the finish across a helpless Ben Foster, and what consistent brilliance he is producing week after week.

Ranieri had been given giving the rousing reception one would expect before kick-off, both from a beaming Jurgen Klopp and a set of fans who have welcomed their fair share of saviours. Perhaps he could draw on the example of a recent predecessor: 20 months ago, Nigel Pearson led Watford to a sensational 3-0 win over Liverpool and was serenade to the tune of “Bad Moon Rising”. Never mind the fact things went downhill from there: a repeat would have offered hope of a happier relegation fight this time.

In truth February 2020 feels several galaxies ago, a sense that quickly transferred to the pitch. It took Mane only eight minutes to breach Ranieri’s first selection and nobody could feel too surprised. Danny Rose had been picked as the left centre-back but had already been exposed before costing Watford more dearly. He was rolled far too easily by Salah 10 yards inside his own half although it still took something special to pick a route to goal from there.

Salah let the ball run before bending an exquisite first-time pass with the outside of his foot towards Mane, who had darted centrally into the ‘D’. It was a breathtaking piece of work and matched by the finish, taken low on the run and steered past Foster. The milestone it conjured was testament to Mané’s enduring quality; the goal’s origin spoke of a creator operating somewhere near maximum expression.

Nearly 20 minutes passed before Watford managed a sortie into Liverpool’s half. In the meantime Foster stretched to tip away a Salah curler before Rose, the right side of goal this time, blocked from the same player. When Salah was released by Trent Alexander-Arnold but allowed Foster to smother, Watford could have been forgiven for feeling lucky.

They briefly steadied the ship without posing Caoimhín Kelleher’s goal the remotest threat. The sense remained that Liverpool could step things up as required and they doubled the lead eight minutes before half-time, Naby Keïta finding James Milner’s run to the left byline and Firmino accepting a simple task in converting the veteran’s driven centre. Had a subsequent Keïta drive deflected in rather than grazing the bar, Ranieri’s half-time plight would have been worse.

Watford had seen 17% of the ball and it was the ideal afternoon for Klopp, who had lost Alisson, Fabinho and Curtis Jones to unwelcome consequences of the international break, to forget his concerns. Even though Ranieri deployed Tom Cleverley after the interval, nothing improved. Foster denied Salah again with a stunning save but it was temporary respite. When Craig Cathcart stretched to intercept Andy Robertson’s ball towards Salah, it was all the keeper could do to prevent an own goal. Firmino, lurking again, dispatched the loose ball. Salah would have been offside had the cross reached him, but that argument was deemed immaterial.

There was no debating Salah’s activity two minutes later, when he submitted the latest entry in his personal goal of the season competition. Firmino poses no danger to him on that front, but the Brazilian earned the match ball with his third poacher’s finish of the afternoon, stabbing in Neco Williams’ cross at the death.