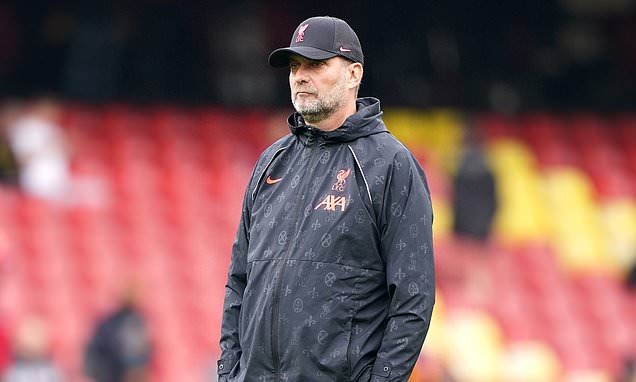 By Max Mathews For Mailonline

Jurgen Klopp has unleashed a furious rant at broadcasters who decided Liverpool's game against Watford would kick off at lunchtime.

The Reds kicked off at 12.30pm British time against the Hornets in the Premier League at Vicarage Road on Saturday afternoon in new boss Claudio Ranieri's first match.

Liverpool's Brazilian stars Alisson and Fabinho were unable to play in the match, having just completed international duty with Brazil.

The Reds kicked off at 12.30pm British time on Saturday against Watford at Vicarage Road

He told journalist Des Kelly on BT Sport before the match: 'Because we play at 12.30pm there was no chance that they'd play and that's why we thought then to send them (to Spain).


'If we would have played tonight they would be here and we would have given it a try, but we play at 12.30pm and there was no chance. I think it was the broadcaster's (BT) idea to have us at 12.30pm, was it Watford?

Therefore, with little prospect of making the match the club decided to send them directly to Madrid for their Champions League match on Tuesday.

In Friday's press conference, Klopp fumed: 'Somebody decided to give Brazil the opportunity to play last night. And then somebody made the decision for us to play on Saturday at 12.30. It's not in our hands.'