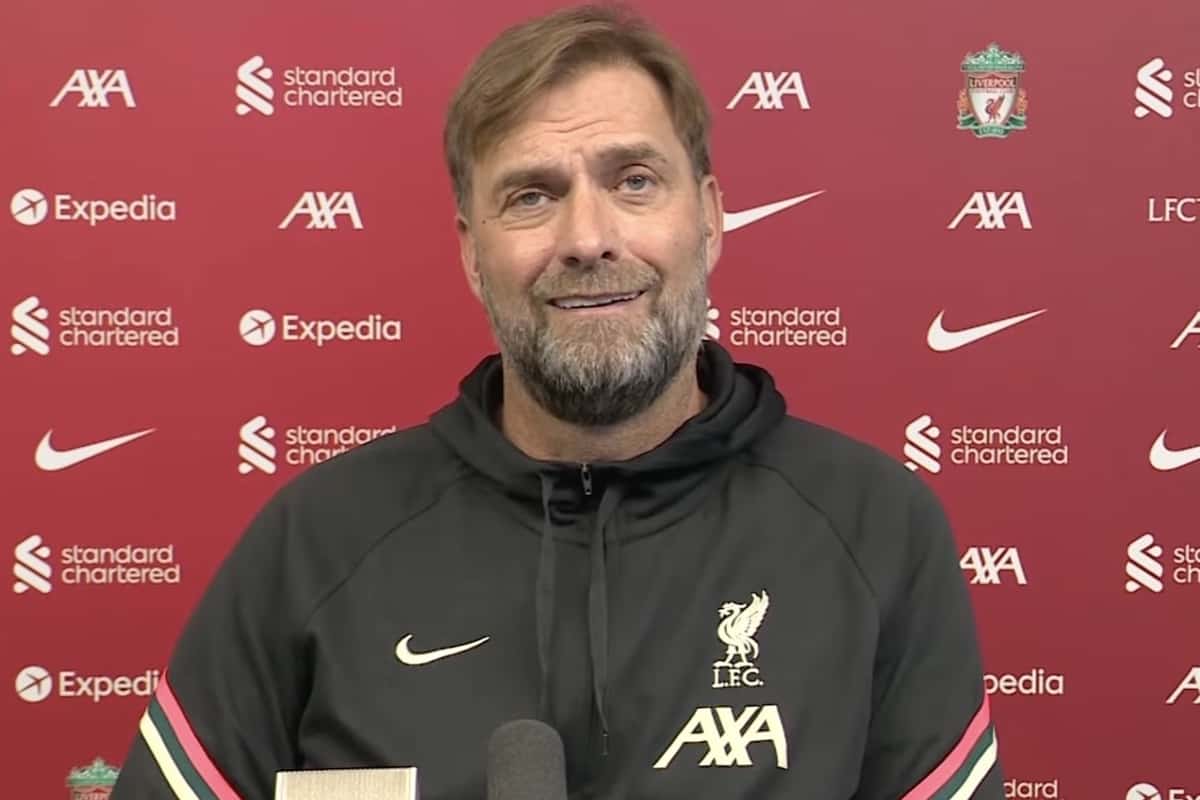 Jurgen Klopp came out firing in his pre-Watford press conference, showing his frustration at Liverpool’s injury situation and other problems out of their hands.

Here are five key things from Klopp’s press conference, which was held at Kirkby.

Decision made on Alisson & Fabinho

And it’s a sensible one.

Rather than fly back to England, miss both the Watford and Atletico games and quarantine for 10 days, they will head directly to Madrid and avoid it all.

“They will go directly to Madrid, wait there for us, be able to play hopefully then against Atletico, will come slightly later back than us, 10 days over then,” Klopp explained.

“And then they can come back and are in our normal procedure again, and that’s it.”

Not only will Alisson and Fabinho be missing on Saturday, but neither Thiago or Curtis Jones are fit to take part either.

Thiago is still sidelined with a calf injury, while Jones returned from England under-21s duty with a groin problem.

On Thiago, Klopp said: “It still takes a little bit of time.

“That’s a bit disappointing, but we’ve known for a few days now that it will not go that quick. We have to wait.”

Klopp’s not happy with the English FA!

Throughout his press conference, Klopp took aim at Gareth Southgate for overlooking Joe Gomez for his England squad – “obviously there is a special thing for Mr Stones!” – and the U21s for their treatment of Jones.

“It’s really difficult to get proper contact even with the English federation, because they just do what they want,” he said.

“He didn’t train, was not involved in the first game, they didn’t do a scan…came back, slight injury, not available for tomorrow.”

Klopp also pointed out how clubs in England would never be catered for like Atletico Madrid and Real Madrid were in seeing their weekend fixtures postponed due to Brazil, Argentina and Uruguay internationals being unavailable.

“Something like that would never happen here!” he said.

He’s in awe of Claudio Ranieri

Ahead of his first game in charge of Watford, Ranieri expressed his desire to stay in management until he is in his 80s – so over a decade more of hopping from club to club and country to country.

Klopp could very well be in his last job as a club manager, with his contract with Liverpool due to expire in 2024, and he doubts he will follow in Ranieri’s footsteps.

However, he did add: “First and foremost, congratulations to Claudio that he is now 69 – I see myself here on the screen, he looks younger than me!”

“There’s a new superpower in Newcastle”

After giving an interview to Sky Germany earlier this week in which he spoke about his concerns over the human rights issues within the new Newcastle ownership, Klopp was asked a similar question in his press conference.

He largely covered the same ground, insisting that though Newcastle may make mistakes with their new wealth, they will become a “new superpower” in football.

“Money cannot buy everything, but over time, they have enough money to make a few wrong decisions and then make the right decisions,” he said.

“Then they will be where they want to be. I don’t think that can be avoided in the long term.”