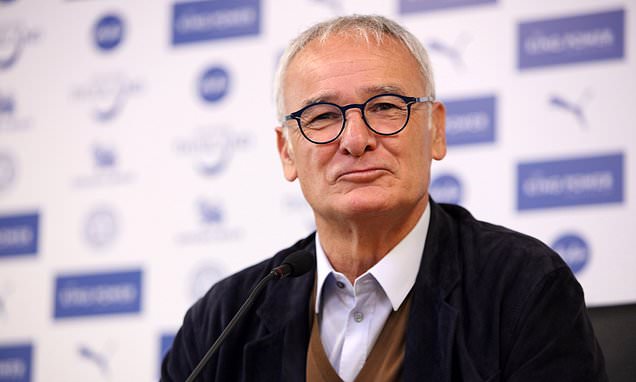 One week short of his 70th birthday and Claudio Ranieri could be basking in the gentle glow of the Mediterranean rather than settling into the hottest of the Premier League's hot seats but that really isn't his style.

'I'm very bored if I don't stay in football,' explained Ranieri as he was formally unveiled as Watford's latest head coach, his 22nd different job across 18 different clubs and one national team in a managerial career stretching over 35 years.

'I love football. I love the life. Fifty… 70… 80 maybe… why not? The oldest manager in England maybe with a walking stick.'

He did a little mime of a crooked old man before snapping upright to add: 'But the brain is important and the brain is very young.

His immediate targets at Watford are modest enough.

'We have to be safe. I think only about the 40 points. Remember me at Leicester? 'Forty points, 40 points'. Then '41'. We have seven and there are 33 more points to achieve. Then slowly, slowly, improve next season.'

This is Ranieri's fourth job in English football. There were four years at Chelsea from 2000 when he was dubbed the Tinkerman because of his habit of constantly making changes to the team and the formation jarred with a consensus that the best approach was to have a settled side.

However, he is famed as the architect of Leicester's Premier League title win in 2016 (above)

'I carried the flag,' he laughed. 'Twenty years later and a lot of managers are Tinkermen. I have the flag and they followed behind.'

But he lasted only three months at Fulham, his most recent Premier League posting, where he failed to remedy a dreadful start to the season.

'I made mistakes at Fulham, sure,' said Ranieri. 'When I managed the Greek national team, sure. It can happen in long career, 35 years. You have to put it behind you. Another match, another day.'

This brief spell at Craven Cottage is best reduced a marvellous piece of trivia because he took over from Slavisa Jokanovic and was replaced by Scott Parker, respectively his first and last signings when he was Chelsea boss.

At Leicester City, however, his achievements will live forever as one of football's great fairy tales, even if he was sacked nine months after winning the Premier League title at odds of 5,000-1 with a team tipped for relegation.

'I tried to do my best,' said Ranieri. 'And I'm happy if some people, not only in sport but in life, think that if Leicester did this, then why not… That is very good hope for the people.

'For me, the day after, it was in the past. I forgot everything. I look always forward. What happens tomorrow, what happens on Saturday? Another Leicester could happen in 100 years.'

But he will always embody hope for the outsiders against the elite, and he returns at a time when Newcastle United is giddy with possibility, following the takeover by representatives of Saudi Arabia's sovereign wealth fund.

Reminiscent, perhaps, of the time Roman Abramovich swept into Chelsea, transforming the landscape of the Premier League and expectations at Stamford Bridge?

'I was sacked,' replied Ranieri. 'I finished second behind the unbeaten Arsenal and reached the semi-finals of the Champions League, and I was sacked.

'That is the life - and you will tell me Watford change a lot, it's unbelievable.'

Ranieri will not fear the crazy carousel that makes him the 14th permanent Watford boss in nine years under the Pozzo family or the sixth to take charge in less than 50 Premier League games.

He is insulated by his vast experience and knowledge of the how the club's owners like to operate.

He faces a daunting fixture list - starting at home to Liverpool (above) on Saturday and with Everton, Southampton, Arsenal and Manchester United to follow

Giampaolo Pozzo, father of Watford owner Gino, once tried to recruit him as manager of his Italian club Udinese. 'It was 20 years ago, roughly,' revealed Ranieri. 'He wanted me at Udinese and we didn't achieve it.'

This time the deal was sealed in a flash. Watford called after losing 1-0 at Leeds on their last outing before the international break left them with seven points from seven games. Ranieri was on a plane to London the very next day.

He had been without a club since the end of last season when he left Sampdoria, where he restored calm and stability having assumed control in 2019 when they were adrift at the bottom of Serie A, with three points from seven games.

They avoided relegation with games to spare and finished ninth in his second season before Ranieri left to the disappointment of the fans, having failed to agree a new contract with the club.

There have been highs and lows and few will be surprised if his time at Watford will turn out to be another of his shorter tenures.

It is a daunting fixture list starting at home to Liverpool on Saturday and with Everton, Southampton, Arsenal and Manchester United to follow before what would be his first competitive return to Leicester at the end of next month?

'There will be a bad moments and we have to stay close with our fans and fight,' said Ranieri, and he is miming once again to illustrate his point, lifting his hands in front of his face, ducking, weaving and jabbing.

'I maintain my spirit. Nobody can kill me, nobody. Because sport is fantastic.'