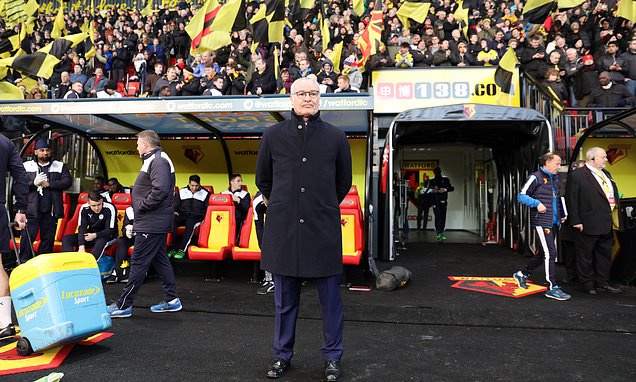 Claudio Ranieri is adamant that age is just a number days out from his 70th birthday on his first presentation as Watford boss.

Ranieri arrives at Vicarage Road as successor to Xisco Munoz, who was axed seven games into the season.

While Ranieri famously guided Leicester City to the league title in 2015-16, it was a much more sobering experience with Fulham across 2018-19 where he won just three of 17 matches.

Asked if he felt any weariness in returning to English football's top-flight, Ranieri laughed it off and insisted he feels fresh and raring to go.

'I have a strong character, I am still young and I want to continue.'

There was a brief pause for some laughter among the journalists in the room to which he replied: 'Why are you laughing?'

'I am very happy to come back to the Premier League; it's one of the best leagues in the world. I am an ambitious man and I hope to keep Watford safe this season.'

It couldn't be a much tougher start for him with Jurgen Klopp's Liverpool coming to town for his first match in charge.

Liverpool have one of the most feared attacks in European football and while Ranieri knows the odds are stacked against his side he was keen to offer up an incentive for his players.

At Leicester he famously offered to buy his dressing room pizza if they kept a clean sheet but he's altered his proposal this time around.

Watford are currently 15th in the Premier League heading into their weekend match-up with the Reds with just two wins - against Aston Villa and Norwich - from their opening seven matches.

Defeat away at Leeds was the final straw for the Pozzo family, who own Watford, and Xisco and now the pressure is on Ranieri to kick-start an immediate revival - starting on Saturday.

'We have to be safe and then slowly we go up,' he explained when asked of his plan.

'The programme is very good, it's very ambitious, he (owner) is ambitious and I am even more ambitious. I hope it is good for Watford and for our fans.

'Saturday there will be one of the best teams in the world. It's OK, we are ready, always. I am ready and my team is ready. It will be a battle and we will battle.'