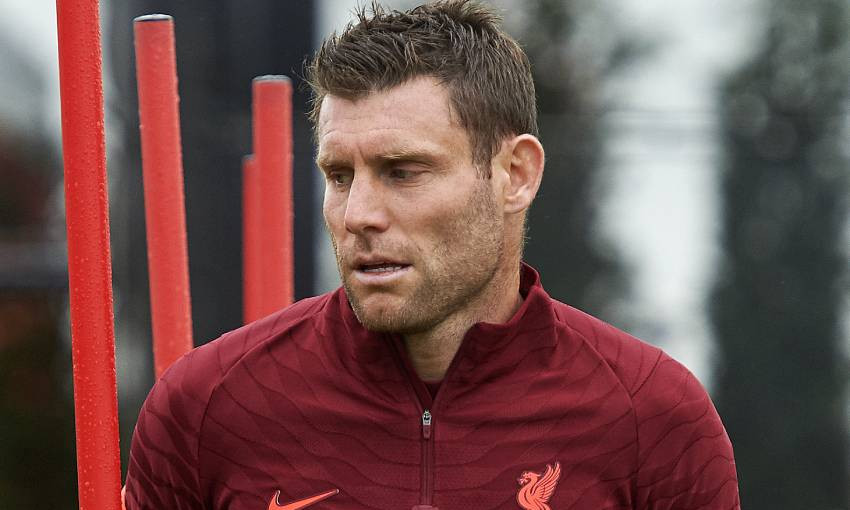 James Milner feels refreshed and ready to help Liverpool build on their 'solid’ start to the season following this latest international break.

The Reds resume their 2021-22 campaign by travelling to Vicarage Road on Saturday lunchtime to take on Watford, who last week installed Claudio Ranieri as their new head coach.

Milner retired from representing England back in 2016 and now uses the pause in club football to ensure he’s in the best possible shape physically and mentally to serve Jürgen Klopp.

Liverpoolfc.com caught up with the vice-captain at the AXA Training Centre ahead of the Watford encounter – read on for the interview…

So, Millie, 10 games in – a point off the top in the Premier League table and top of the group in the Champions League. Is this how you envisaged the season would start?

I think it's a solid start. I think we know in games we've had the performances could have been better at times, we've dropped points where we maybe wouldn't have liked to, but I think it's a great base to go from. It's always tricky at the start of the season – and still is at this point, I think, when you're playing a few games and then the international break, a few more games and then international break. It's hard to get the rhythm. Players obviously going off and playing with their national team and having to come back and fit back into different systems and things. So, I think it's a solid start with the games we've played. Obviously the Champions League group is pretty tricky. The start we had in the league was pretty tricky as well and unfortunately every game in the Premier League is tricky, isn't it? So, it's a solid start and we know that we can play better and there's plenty to improve, so that's the pleasing thing.

Since retiring from international duty, how do you utilise this week best for yourself now?

I think it's nice to get away whenever possible really. It's so intense when we're here and not many days off. So to get that time away and a change of scenery [is nice] – still do the work that you need to do, the fitness side and things like that. But to be able to get a break from the intensity of the AXA and games every three days, when you come back you feel so ready to go again for that next burst. That's helped me obviously. I did international football for a very long time, so I know how tough it is. So now when you get these breaks, it is great for us to recharge but obviously you're still doing your fitness work and when you come back, you're ready to go again.

Inside Training: Rondos and attacking drills on Tuesday

Just on Curtis Jones, you've taken great interest in him and are trying to drive him to that next level. Is that part of what you see as your role now off the pitch?

I think so. I think I was very fortunate when I came through at Leeds. I was very young and I had a great dressing room behind me. It was a bit more hostile back then, if you like, and a bit more going on and you had to be a bit more careful. Obviously it was different times then and things going on, and if you made a mistake, you knew about it and ducking from teacups and things like that! I had a great upbringing coming through at Leeds and the standard set and the older guys. The talent that we have with the first team and the younger guys in the Academy, hopefully the senior players can help them as much as they can. We know how brutal football is. You need so much luck, you need that mental side and that mental strength to deal with ups and downs – and that's where we have to come in as older, senior players and maybe take the difficult things off their shoulders and make it a bit easier for them and maybe keep that harder side away from them when it's disappointing. But also, you need to give him that encouragement when they're doing well and let them know they're doing well and hopefully just give them that guidance to go and play football. Because the ability these young guys have is incredible really. Then you just need that mindset to go with it.

You've been with Harvey Elliott in the gym, trying to keep his levels of enthusiasm up as this is a really tough period now...

He's been so positive from the start, to be honest. I was talking about mental strength before, as soon as it happened, the things he was saying, he talks like he's been through it all before and he's a 30-odd-year-old player. He's incredible. He's got a great mindset, he's done all his work, he's progressing really well. Not too far off getting rid of the crutches, I think, which is fantastic. You just need to keep that phone out of his hands, so I think it's good when he's on his crutches because he can't be on Insta and Twitter and all that! But he's working really hard and that's the thing that people don't see. They see the stuff in the gym and the videos, but at home now and he's on his crutches and he's doing band work and just lifting his leg up to keep the strength in his muscles. It's so boring and would be easy not to do, but that's the hard work that gives you the basis to push on through. He's doing really well and that's great to see.

Watford, with a new manager in place, represent another really stern test for you...

It seems to always happen to us, I think, when teams are maybe going through a sticky patch and the manager changes before we play them. That makes them more unpredictable, I think. Obviously I think it's always going to be tough. Whether they're flying or they change the manager, it's going to be tough. It's the Premier League, there's good teams and teams who are struggling are going to want to turn it around. Obviously probably a bit less pressure on them – teams will expect us to win and people will expect us to win. So, the pressure is off them a bit and they can go out there with a free hit. Now obviously with a change of manager, he might change a lot, he might not change too much – it's hard to know, so that makes it a bit more difficult. We just have to make sure that we concentrate on our side and put in a performance and prepare the best we can for how we think they're going to play. But it's on our performance really.