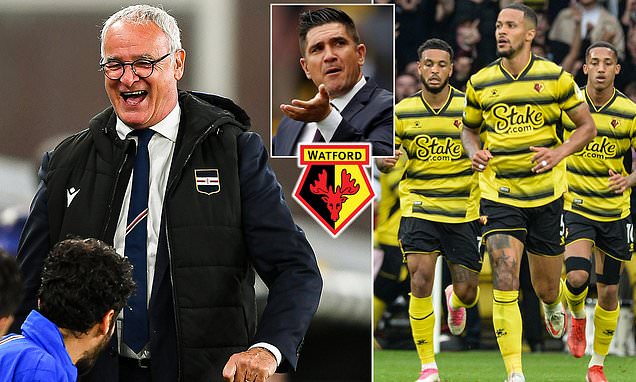 Claudio Ranieri has been confirmed as Watford's new manager.

On Sunday, the Italian emerged as a serious contender to take the reins at Vicarage Road after Xisco Munoz became the first managerial casualty in the Premier League this season.

The 69-year-old is now in charge of a Premier League club for the fourth time in his career, following previous stints in west London with Chelsea and Fulham either side of his historic spell at Leicester.

The Italian is set to take over from Spaniard Xisco Munoz, who was sacked on Sunday

The appointment of Ranieri - who left Sampdoria in May after two years at the helm of the Serie A outfit - marks a shock comeback to English football for one of the league's most recognisable figures.


Ranieri led Leicester City to an unlikely Premier League title more than five years ago, some 16 years after his first job on these shores at Stamford Bridge.

He would go on to manage the likes of Juventus, Atletico Madrid, Valencia, Inter Milan and Roma before a spell in charge at Fulham, but could not save the club from top-flight relegation in 2019.

Ranieri however is now the Hornets' 16th different permanent boss over the course of the last decade, and the 13th since the Pozzo family completed their takeover of the club in 2012.

The ex-Leicester boss' first game in charge is set to see Jurgen Klopp's Liverpool visit Vicarage Road in the Premier League after the international break on October 16.

Over the weekend, Watford made the ruthless decision to sack Spaniard Munoz after just 10 months in charge.

The 41-year-old led the club back to the Premier League in his first season, but the hierarchy were ultimately unsatisfied with their start of four defeats in their opening seven games back in the top flight.

The latest of those reverses came in their 1-0 defeat by Leeds on Saturday, leaving them in 15th place on seven points.

Xisco was popular among the Watford players and staff - particularly following Vladimir Ivic's tenure - but his lack of control at the club was viewed as a clear indicator towards his departure.

'The board feels recent performances strongly indicate a negative trend at a time when team cohesion should be visibly improving,' the club said in a statement.

'The Hornets will always be grateful to Xisco for the part he played in securing last season's promotion and wish him well for his future career in football.'

Munoz issued his own statement via Twitter after leaving Vicarage Road, saying: 'It's been a wonderful journey and it concluded in a way that I neither expected nor wished for.

'I'm grateful and I will only remember all the good things I have experienced.

'It's a sad day for me and my family because it marks the end of a period at a club and in a city where we have felt at home.

'I've got nothing but words of gratitude for the club that gave me the opportunity to start my first adventure in this exciting country.

'My heartfelt thanks to the players to put blind faith and believing in me and my staff from the first moment so that together we could achieve the dream of promotion to the Premier League.

'And many thanks to all the members of the club who don't appear on the photos, because they are essential for the proper functioning of this team. You made my life so much easier.

'Finally, I would like to make a special shout out to the fans. It's only been a year, but I will never forget its intensity and the treatment you have always given me over the year. I will always be a Watford FC fan.'