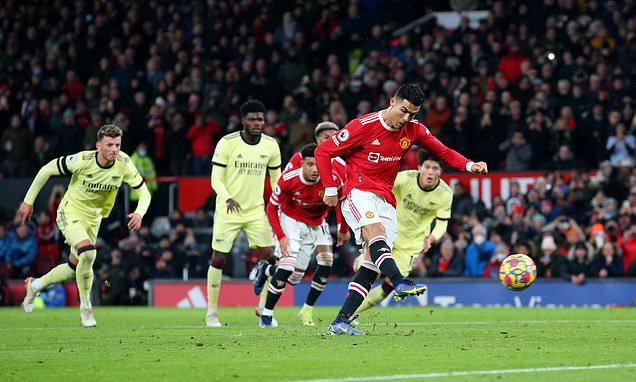 Bruno Fernandes has revealed that Ole Gunnar Solskjaer's penalty rule of Manchester United players still be allowing to take spot kicks despite missing the previous one has been scrapped.

Cristiano Ronaldo's 70th minute spot kick sealed a 3-2 victory for the Red Devils over Arsenal, with the 36-year-old taking over penalty duties from compatriot Fernandes, who missed a 12-yard effort against Aston Villa earlier this season.

Under Solskjaer, Fernandes was first-choice penalty taker and would have stepped up from 12 yards against Arsenal had the Norwegian been in charge - as the first-choice taker is still required to take them irrespective of his previous record.

But now Fernandes has revealed that this rule has been scrapped in the Old Trafford dressing room, with Ronaldo taking over the duties as his compatriot has missed against Villa in September.


'We (me and Ronaldo) didn't have a chat,' Fernandes told the BBC about Thursday night's penalty call. 'I missed the last one so I trust him in the same way I trust myself.'

'It was time for Cristiano to take the penalty because I took the last one and missed it. It doesn't matter who gets on the penalty.'

Under Solskjaer (left), Fernandes was the first-choice penalty taker at Old Trafford this season

Back in September, following United's 1-0 home loss to Villa which saw Fernandes blaze over a stoppage time penalty, Solskjaer insisted that the Portuguese midfielder would carry on taking spot kicks even though he missed.

'He'll step forward every day of the week for the club and the team,' Solskjaer said at the time. 'Sometimes it just doesn't go your way.

'That is part and parcel of it. It is such a fine line between heaven and hell and unfortunately today he missed it.

'But you know Bruno has been excellent. He is such a good penalty taker and today you'd back him with your mortgage, I would guess.'

Ronaldo's 70th minute spot kick, which was his second of the game on Thursday night, was his first penalty back since completing a £20million move back to United this summer.

The 36-year-old has now scored 12 goals in 16 appearances in all competitions since returning to Old Trafford after a 12-year absence.