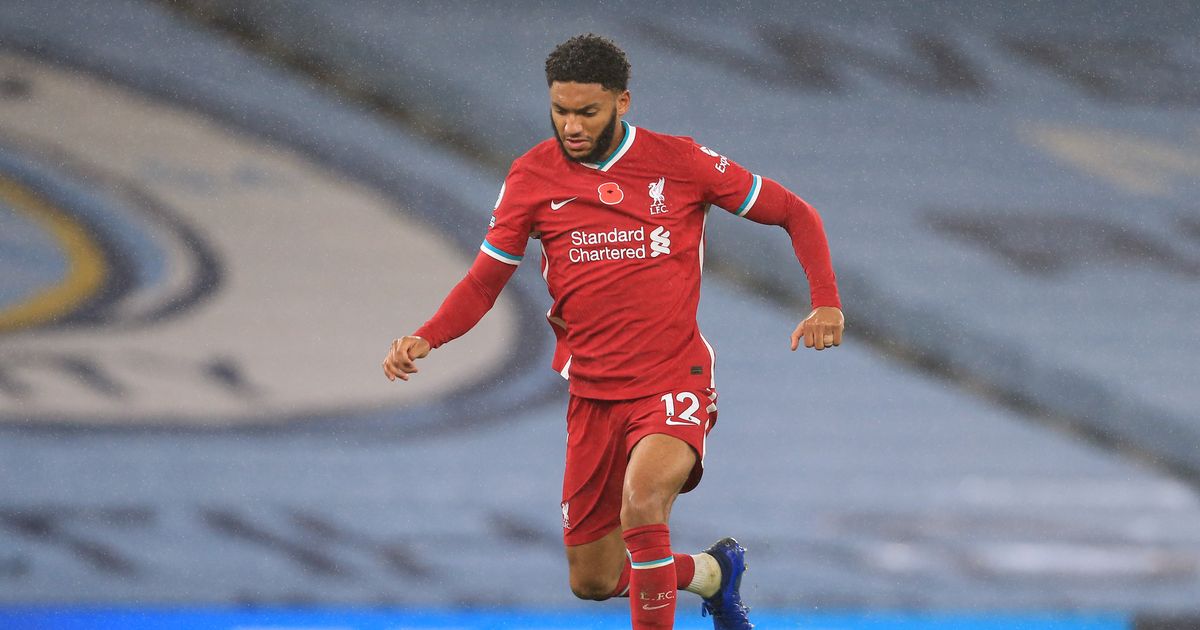 Joe Gomez of Liverpool has been linked with Aston Villa

Aston Villa have been credited with an interest in Liverpool defender Joe Gomez, ahead of the opening of the January transfer window.

Perhaps it was to be expected, that Villa would begin being linked to Liverpool players in the wake of their appointment of Reds legend Steven Gerrard, but the speculation involving England international Gomez is interesting indeed.

Villa are pretty well stocked in the back-line, as it is; Ezri Konsa has partnered captain Tyrone Mings in defence in these first two games of the Gerrard regime, while he can also call upon Axel Tuanzebe and Kortney Hause.

Liverpool, though, boast even more depth than that as Jurgen Klopp attacks competitions at home and abroad. Virgil Van Dijk, when fit, is among the first names on the team-sheet, while Joel Matip has also played regularly this season when available.

Then there is Nat Phillips who, unlike Rhys Williams, stayed put this summer after stepping up amid Liverpool’s injury crisis last season. Gomez too, back fit, is of course an option for Klopp across the back-line.

This season, though, all of the above have had to contend with extra competition in the form of centre half Ibrahima Konate, who arrived for £36m from RB Leipzig over the course of the summer transfer window.

Still only 22, Konate has been given the nod over Matip to play alongside Van Dijk in the two recent wins at Anfield over Porto and Southampton. This is in the absence of Gomez, who hasn’t played for over a month and has been struggling with a calf problem.

Still, even if he was fully fit and available, Gomez looks to have slipped behind summer arrival Konate and competitive minutes are looking hard to come by on Merseyside for a player who will have aspirations to be involved with Mings, Ollie Watkins and the England squad in Qatar for the World Cup next winter.

“It was always clear in our situation that we had to bring in a centre-half. I think everybody agreed on that,” Klopp said recently, when asked about the depth he boasts at centre half and the acquisition of Konate.

“Now we have only top-class players in that position and that makes it a bit harder when you are not in the line-up at the moment.

“Joe didn’t play much yet, but that’s how it is. After the long injury we decided to start with Joel, which made absolute sense. Now Ibou came in. We have to deal with Joey, at the beginning still we are dealing intensity and stuff like this.

“All five of the boys get on really well with each other, which is really nice to see. They respect each other a lot. We will need them, and we will need Joe, and Joe’s quality is incredible, we all know that.”

Despite those words, Gomez has played just 13 minutes of Premier League football this term, spanning two appearances, and the bulk of his minutes have come in the EFL Cup.

The link with Villa, then, is intriguing; we’ve seen already with Tuanzebe that Villa is a healthy environment for players on the fringes of the top six squads to escape and try to earn more game time.

We’ve also seen with Mings, Watkins and the departed Jack Grealish that Villa Park remains a viable stage for players to perform on in the knowledge that Gareth Southgate will be watching.

Gomez has a £36m rival in the form of Konate who would appear to have nabbed his next-cab-off-the-rank title in the heart of Liverpool’s defence. An inter-Premier League switch to Villa could make sense for all parties.