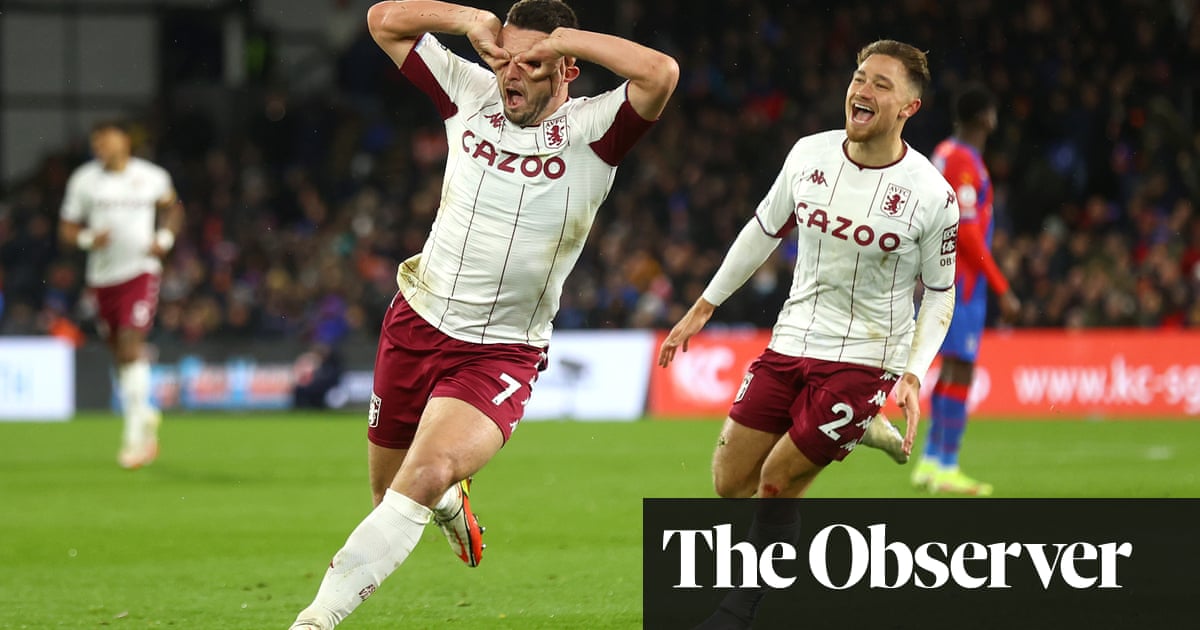 The first meeting between two of the greatest midfielders to have graced the Premier League in their new habitats as managers ended with a triumph that Steven Gerrard must have savoured.

Trailing to Matt Targett’s early goal and having delivered their worst performance since Patrick Vieira took over for Roy Hodgson in the summer, Crystal Palace were left frustrated by a stubborn rearguard effort from Aston Villa as they failed to find a breakthrough despite a vastly improved second-half before John McGinn made sure of the points for the visitors late on. Marc Guéhi’s consolation goal arrived far too late for Palace.

The victory not only made it two in succession for Aston Villa’s new manager since his arrival from Rangers but will also provide a benchmark for the rest of the campaign as they inflicted Palace’s first home defeat of the season.

Gerrard has spoken of his admiration for Vieira as a player, describing the former Arsenal captain as a “role model” and admitting to have based large parts of his game on the Frenchman. He also paid tribute to the start his old midfield rival has made to life as a Premier League manager that saw Palace begin this game three points ahead of their opponents having only lost to Chelsea and Liverpool.

The absence of the outstanding Joachim Anderson from the heart of his defence due to a hamstring injury forced Vieira to hand James Tomkins a first league start of the season, with Michael Olise the other change from Palace’s draw with Burnley last week. Perhaps surprisingly, Gerrard opted to leave summer signings Emi Buendía and Danny Ings on the bench and selected Ashley Young and Leon Bailey to support Ollie Watkins.

Having survived an early scare when Wilfried Zaha dragged his shot just wide of the post after a flowing Palace attack, Villa won a corner at the other end and promptly took the lead. A misjudgement from Cheikhou Kouyaté allowed Targett the opportunity to take a touch before firing through the Senegal midfielder’s legs and into the net.

Missing the industry of the injured James McArthur, Palace struggled to find a response as Zaha and Conor Gallagher were denied space by a compact defence. It was Villa who looked more likely to extend their lead as McGinn curled a sumptuous effort just wide of Vicente Guaita’s far post before Tyrone Mings made a hash of Young’s brilliant free-kick into the penalty area.

There were more than a few murmurs of discontent among the home supporters as Christian Benteke failed to make contact with a clearance just as half-time approached while an attempt to win a penalty by Watkins after he clashed with Kouyaté was met with similar disdain. Palace were then lucky to survive a bizarre moment of indecision that saw Tomkins and Guaita both leave a cross to one another before Joel Ward came to the rescue.

It was no surprise to see that 15 minutes spent in Vieira’s company saw Palace emerge for the second half in a determined mood to put things right. A raking crossfield pass from Olise that either manager would have been proud of set the tempo, even if Zaha failed to pick out Benteke with the resulting cross.

A moment of madness from Luka Milivojevic almost gifted Villa a second when his short free-kick was intercepted and the Serbian brought down Watkins just outside the box. Young’s effort was inches off target. Gerrard was next to count his blessings when Matty Cash and Ezri Konsa almost conspired to turn Gallagher’s cross into their own net.

The return of Eberechi Eze after nearly six months out with a knee injury saw the atmosphere inside Selhurst Park go up a notch as he replaced the disappointing Milivojevic. A VAR check then spared Villa substitute Douglas Luiz after replays showed he had hardly made contact with Kouyaté’s shin despite being initially shown a red card by the referee, Michael Salisbury.

Benteke’s volley straight at Emi Martínez after being set up by Tomkins became even more costly when substitutes Buendía and Anwar El Ghazi combined to set up McGinn’s brilliant curler that ended Palace’s resistance in its tracks despite Guéhi’s late strike.