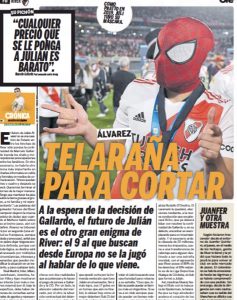 Aston Villa are one of the clubs in the race to sign young Argentine star Julian Alvarez Julián Álvarez after his performances for River Plate.

That’s what Olé report today, explaining that Steven Gerrard’s side have ‘showed their interest’ but are not the only ones to do so.

Álvarez is one of the rising stars of world football, having racked up 33 goals and 23 assists in 92 games for River Plate so far.

Several sides in Europe are keeping an extremely close eye on him, including Aston Villa, who have regularly been named as suitors over the last few months.

Indeed, earlier this month, it was confirmed his agent had even been in England for talks, adding more fuel to the fire in terms of Aston Villa.

Olé pick up on that today and say they are one of the sides to have ‘showed their interest’, with Real Madrid, Inter, AC Milan, Bayer Leverkusen, Juventus and Ajax the other parties named.

They say that ‘dozens’ of weekly consultations with agents and representatives must be happening on a weekly basis regarding the youngster, with the ‘vultures’ circling.

River Plate are desperate to keep him, but his contract expires in 2022 and with no new deal in sight, that puts them in need to sell territory.

The youngster has a €20m release clause in his contract, which is ‘not enough’ for a player whose numbers make him the best U21 striker in the world.

That’s a figure the likes of Aston Villa could pay easily and is more akin to a ‘domestic transfer’ than someone who is ‘destined to be a world star’.

A ‘gold dust’ player should be going for far more as far as they are concerned, and that is something his long list of suitors are more than likely well aware of.