How can Steven Gerrard get Buendia, Ings and Bailey firing at last?
Daily Mail 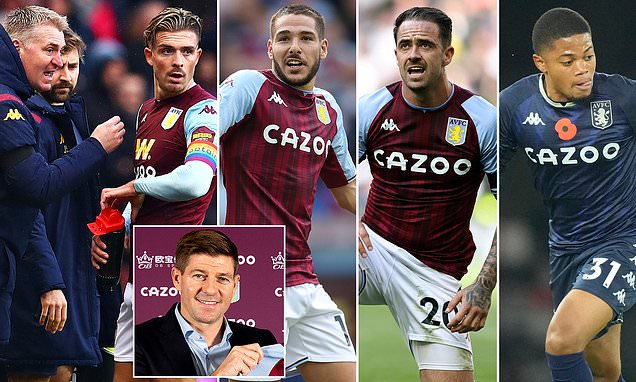 It was always going to be Aston Villa's primary problem when it came: how to replace and move on from Jack Grealish?

The £100million sale of their star man and talismanic captain to Manchester City in the summer presented an issue for manager Dean Smith, as he took Villa into his third season in the Premier League

Ultimately, Smith's inability to replace Grealish's influence was a massive factor in his sacking last week, coming off the back of a fifth defeat on the bounce against Southampton.

Smith said of Grealish's departure back in August: 'We've lost Jack, obviously - but that quality we've brought in again gives us depth in the squad now.


'Our first season in the Premier League was always going to be tough with the changes we had to make, our second one was progression, and our third one now is going to progress even more.'

That progress is yet to materialise. On the contrary, the first three months have seen not just a stagnation, but a decline.

Smith used most of that £100m on three players to fill the void left by Grealish's departure: Danny Ings, Emi Buendia and Leon Bailey.

On paper, they all looked prudent investments. Ings featured for England last season before injury halted his form, Buendia has long impressed at Norwich and Bailey was on the radar of some of Europe's top clubs whilst emerging at Bayer Leverkusen.

Yet the stats show the impact - or lack thereof - of these moves so far, especially compared to England international Grealish at the same stage last season.

In his first 12 games of the 2020-21 campaign, Grealish scored five goals, and registered eight assists.

However Ings, Buendia and Bailey's figures combined don't better Grealish's. Together, they've scored five but only set up five.

It is indicative of one of Villa's biggest failings so far as, along with the out-of-form Ollie Watkins, the boys in claret and blue simply aren't firing right now in front of goal.

Ings managed three goals in nine games before picking up a hamstring injury in October, record signing Buendia has flickered without catching fire and Bailey has spent more time in the treatment room than on the pitch.

And yet, there is enough talent there for incoming boss Steven Gerrard to work with.

Yet the Jamaican has only showed glimpses, like against Everton in September, of his talent

The new Villa boss, while speaking about the task at hand in his first interview with the club, acknowledged the talent in the squad but admitted his first priority was at the back.

‘One thing I’d like to improve on is the structure of the team from a defensive point of view,’ he said.

‘Out of possession, our distances and our shape, and what we do to regain the ball. That’s very important to me. I’ve been very lucky to learn from some world-class managers.

‘It’s got to be a no-excuses, no-blame culture. It’s down to me and my staff to install a new way of playing, an identity. There is a lot of talent in the squad but we haven’t got much time so it’s very important that the players listen and are focused.’

Gerrard knows he needs to hit the ground running - and he halted the club's losing run with a 2-0 win over Brighton in his first match.

But the Premier League season, and a first priority of steering Villa away from the relegation zone, will be a slog all the way until May. In that time, he will need his star attackers to come good.

Gerrard knows Ings from his time coaching at Liverpool and is likely to deploy him through the middle with Watkins on the left, should he opt for a 4-3-3 formation.

That likely leaves just one place left for either Buendia or Bailey on the opposite wing. Such competition for places should work in Gerrard's favour, as he looks to rejuvenate Villa's summer signings straight away.

The form of the attacking trio - bought for a combined £88m - will have a large say in which way Gerrard's first season in the Midlands will swing.