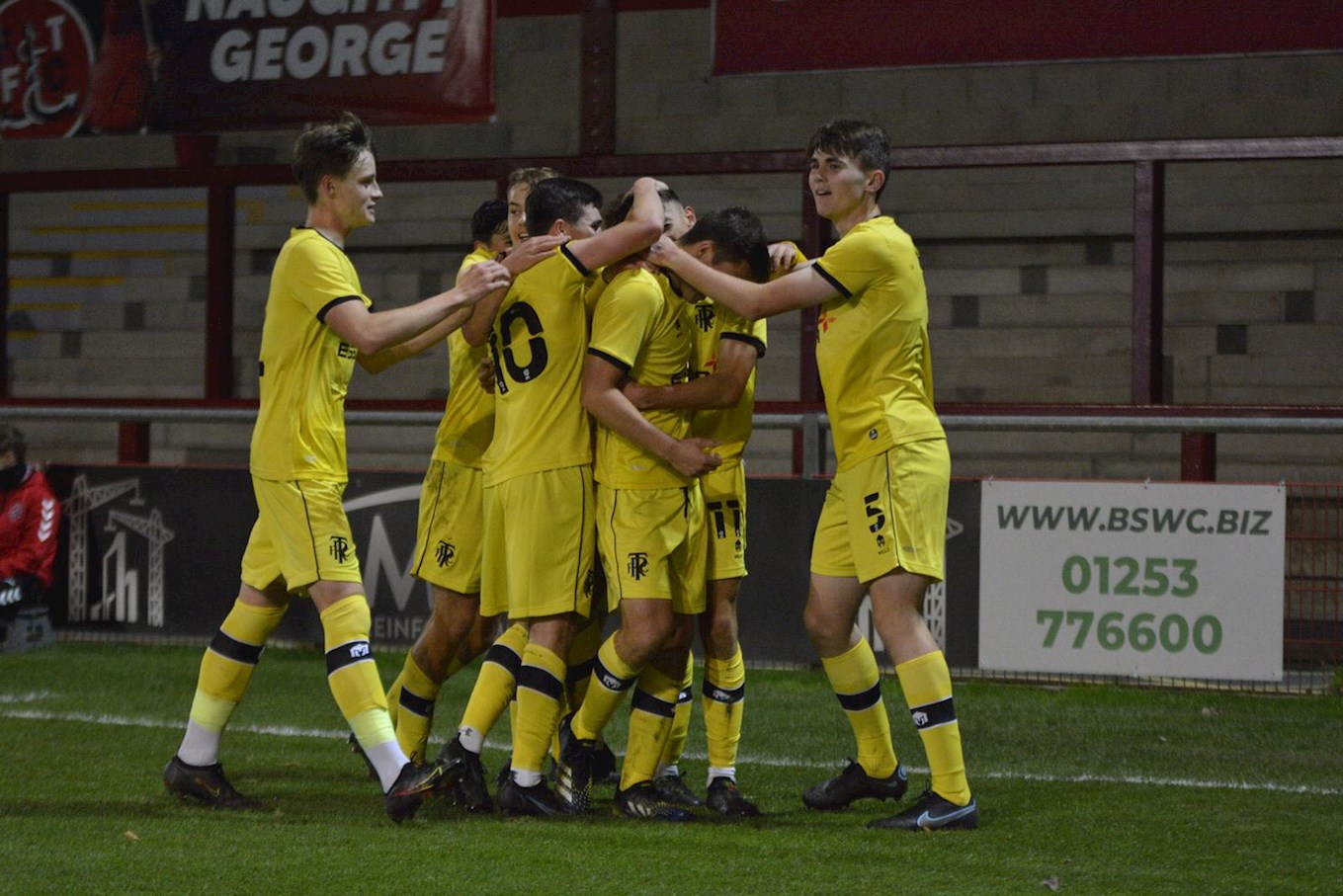 It was a heartbreaking exit from the FA Youth Cup for Tranmere Rovers U18s after suffering a penalty shootout defeat following an enthralling cup tie against Fleetwood Town.

Rovers started the quicker of the two teams with a chance in the opening couple of minutes. John-James King overlapped down the left and his back post cross found Duncan who seen his shot canon back off Eastham’s shoulder in the Fleetwood net.

In the 7th minute, Rovers strike Sam Taylor used his pace to latch onto a long ball over the top. The Fleetwood keeper came off his line but unfortunately Taylor couldn’t direct his left footed shot on target from a tight angle.

Fleetwood’s main threat was coming down the right hand side with Zane Marsh showing his pace on the wing. He found space and delivered a dangerous ball however Haley was well positioned for Rovers to head clear before Thompson-Prempeh could get there.

On the 27th minute, Tranmere carved out their next chance of note. Duncan clipped a ball in behind for Dywer to run on to but his effort with his weaker left foot was easily held by Eastham.

Shortly after, the deadlock was broken and it went the way of Tranmere. A shot from King was deflected up into the air, Sam Taylor pounced on the loose ball and finished past the keeper on the half volley to put Alan Morgan’s side into the lead.

Moments before the break and Rovers nearly doubled their lead. Jamie Timlin muscled his way past his mark on the left before picking out Taylor at the front post. He flicked on at pace but the effort landed a few yards over the bar.

Tranmere started the second half in the same fashion as the first. Neat build up play between Duncan and Timlin lead to Taylor having space 20 yards out however his low drive was gathered by Eastham at the second attempt.

Fleetwood’s first clear cut chance of the game lead to the equaliser. Leggett evaded a couple of challenges down the left before whipping a cross onto the head of Donte Thompson-Prempeh who couldn’t miss from six yards out.

On the hour mark, Rovers nearly regained their lead. Fisher collected the ball in the Fleetwood half and carried it towards goal. His 25 yard strike was smartly tipped over the bar by Eastham.

The next chance went the way of the visitors again. A bit of pinball around the box lead to Jones forcing a save from Eastham with a snapshot. The keeper parried it back into a dangerous area but Timlin couldn’t react in time as it went past his foot.

With 15 minutes left on the clock, Rovers edged in front. Great play by Timlin as he played in Taylor inside the box before he unselfishly squared across the box to Bamgbose who poked home at the back post to put Tranmere in the driving seat.

Again, Fleetwood responded. A free kick on the right corner of the box was brilliantly converted by Kyle King for the hosts. His curling effort beat Dineley and landed right in the top left corner.

In added time an unbelievable reaction save from Rovers keeper James Dineley kept Tranmere in the tie. A free kick from the right was flicked on from close range and Dineley somehow managed to claw it over his crossbar.

It was a very stop start first period of extra time with stoppages for injuries and cramp. Jamie Timlin whipped in a cross to the six yard box but a diving header from Johnson put an end to that attack for Rovers.

Just before the break, Rovers got themselves in front again. Timlin turned and got a shot off inside the box which was saved and there was John-James King who slammed the ball into an empty net.

Literally straight after, the scores were level. A Fleetwood free kick right on the edge of the box fell to Clark who couldn’t miss the open goal after Dineley had already dived.

A dramatic end to the first half of extra time ended 3-3.

In the 108th minute, Timlin again was the threat. He showed great skill to get into the box and drill a low cross into a good area. Johnson got there just before Bamgbose to turn inches past his own post.

With two minutes remaining of the 120, Dwyer found space on the right, cut inside and unleashed a shot which couldn’t trouble Eastham in goal.

With nothing separating the sides, it went to a penalty shootout.

It was Fleetwood who held their nerve in the shootout as they eventually ended the tie with a 4-3 win on penalties.