Report: Move to Spain could be on the cards for Spurs player this month 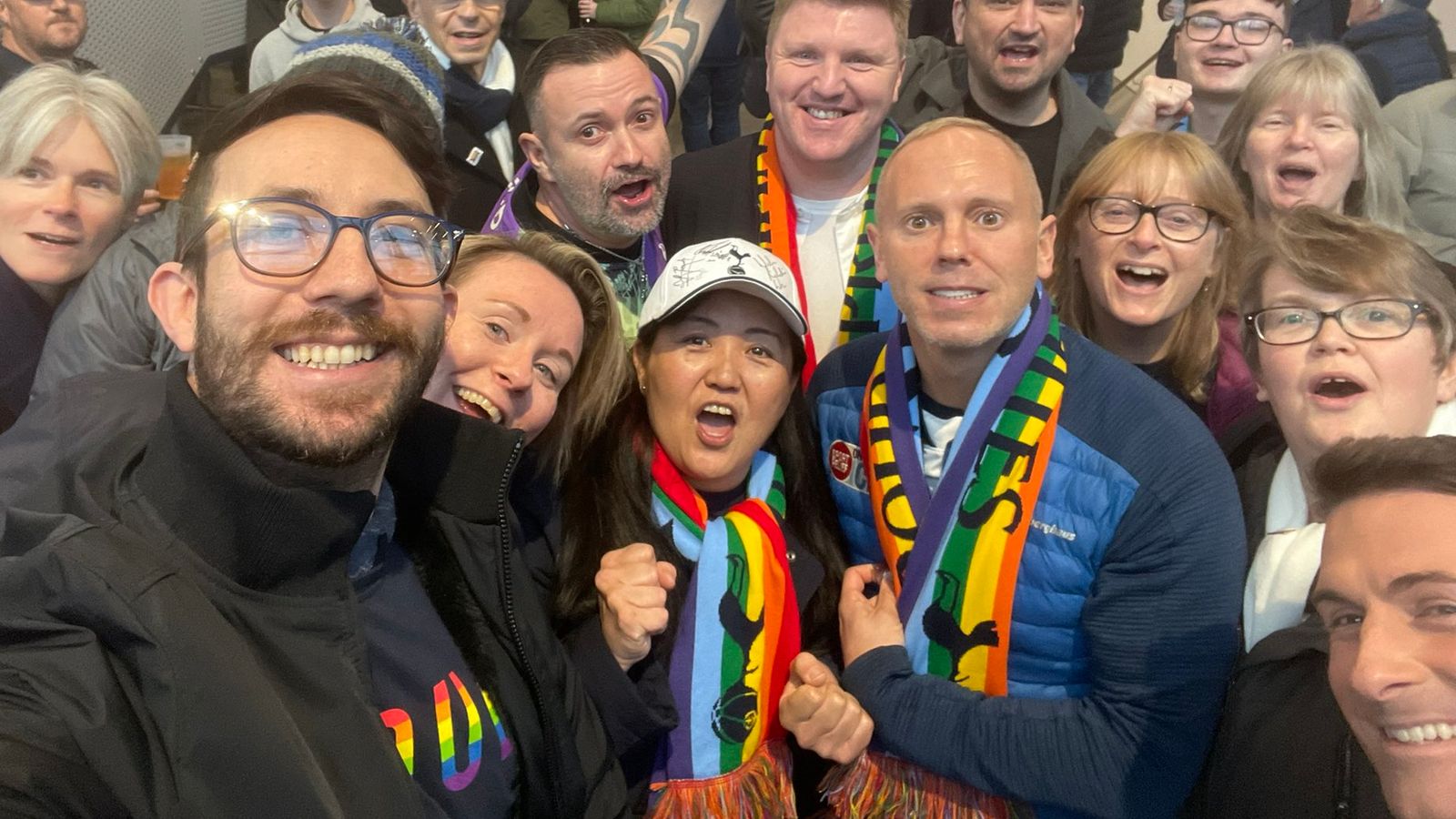 Supporting Tottenham is a shared passion that has run right through 'Judge' Robert Rinder's family for as long as he can remember.

However, growing up in north London in the 80s and 90s, he never quite fell head over heels in love with Spurs in the same way.

Now, in a new episode of 'I'm Game' - the Sky Sports show that takes celebrities and sports stars outside of their comfort zones, all in the spirit of Rainbow Laces - TV's most famous legal eagle is trying to reconnect with the full-on football fan experience.

The £1billion Tottenham Hotspur Stadium welcomed supporters through its turnstiles for the first time back in April 2019. The state-of-the-art arena is a far cry from Spurs' old White Hart Lane home, where Rinder was dragged by his dad as a six-year-old. He described it as "dislike at first sight... for years, I actively hated the game".

Image: The 62,850-capacity Tottenham Hotspur Stadium is the third largest ground in England

He elaborates to host Mark McAdam, welcoming the 'Judge' back to the show having put him through his paces in a Wycombe Wanderers training session two years ago.

"Spurs, more than anything else, was a family religion. It really mattered a great deal, to the men especially in my family," says Rinder.

"It was a way you could communicate everything. I never really understood it until I was older."

Rinder also describes the moment when, at the age of 22, he came out as gay to his brother - and how football was a factor in the response he received!

Family are in his thoughts again as he ascends the stadium structure on the Skywalk and reaches the golden cockerel perched atop.

Looking out on the surrounding area, it's a chance to contemplate what the club means to the wider community.

"This word 'tribal' has become a problematic word - and rightly so to some extent," he surmises.

"But it can also be a force for positivity and inclusion."

Image: The stadium was illuminated in rainbow colours once again when Tottenham hosted Brentford in their dedicated Rainbow Laces fixture last Thursday

Back inside the ground, the 'Judge' is summoned to meet the arbiters of all that happens on the pitch - the Super Sunday studio panel, in place for Tottenham's Premier League clash with Leeds. Former Spurs striker Robbie Keane is the special guest, alongside regular Micah Richards and host David Jones.

Sky Sports is a long-term supporter of Rainbow Laces which seeks to 'make sport everyone's game', in part by highlighting the positive inclusion work that professional clubs carry out alongside their fans groups, community trusts, foundations, and other organisations.

Jones himself has often chaired discussions related to the campaign on air. "When you start having those conversations, that awareness grows that perhaps there have been issues.

"We need to resolve those issues, because football is for everybody. Everybody wants it to be an inclusive environment."

Often, these chats touch upon the fact that despite increased LGBTQ+ visibility in politics, entertainment, and many other walks of life in the UK, there is as yet no representation in terms of playing personnel in the professional men's game.

Keane gives his view when asked about the role of management and agents in advising footballers on their public image.

It's a contributing factor that Rinder takes into account when pondering what a gay or bi pro player in Britain who comes out publicly might encounter. "They're going to be met with challenges, undoubtedly. Certainly by opposing sides - but they'll do anything to get to you.

"But by your team members, the public, sponsors - by anybody who's anybody who cares about this game, it's going to be overwhelmingly positive."

Such a player can rest assured that they would find the strongest support from the many LGBTQ+ fans groups across the country - there are now more than 50 affiliated to clubs, and Tottenham's Proud Lilywhites was one of the first to be set up, back in 2014.

Co-chair Lee Johnson tells Rinder how he reconnected with Spurs through being part of the group.

"I fell out of love with football for quite a long period because I heard homophobic chanting at a match," explains Johnson.

When did that change? "It wasn't until I saw the Proud Lilywhites rainbow flag in the stadium on a matchday on TV. I did some research on the group, found them - and fell in love with football all over again."

Half-time is somewhat gloomy for home fans old and new as Daniel James puts Leeds into a narrow lead shortly before the break. However, Pierre-Emile Hojbjerg equalises approaching the hour mark and Sergio Reguilon completes the comeback, giving Antonio Conte his first league win in charge.

All that's left is for Rinder to arrive at some conclusions of his own, as he contemplates how going to the game has changed since his childhood.

Your story of being LGBTQ+ or an ally could help to make sport everyone's game - please contact us here to discuss further.