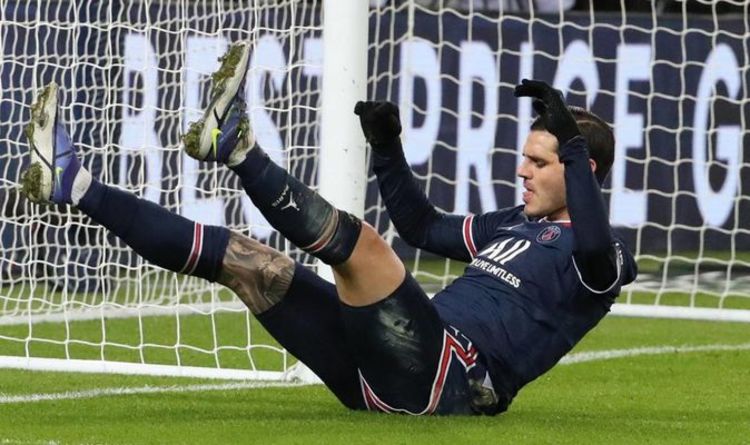 Antonio Conte has been given the chance to reunite with Mauro Icardi after Paris Saint-Germain put the striker up for sale. Despite fending off Manchester City last summer, Harry Kane’s transfer situation remains unresolved.

Tottenham are weighing up whether they need to replace Kane next summer with City still interested in signing a striker.

And that man could be Icardi, who was briefly coached by current Spurs manager Conte at Inter Milan.

The Italian joined the north London side last month and has already stated that he will need time to get his side up to how he wants them to play.

Conte would love to splash the cash in January and bring in his own personnel as he looks to snatch a top four spot this season.

Mauro Icardi has been linked with a transfer to Tottenham (Image: GETTY)

But whether club chief Daniel Levy will give him the money he needs remains to be seen.

However, one player has come onto the market that Conte knows about in the form of Icardi, who has been transfer listed at PSG.

According to Foot Mercato, agents have offered the Argentine’s services to Tottenham in a bid to rekindle his career after losing his way at the Parc des Princes.

The striker started brightly after three goals in five games but his off-field drama with wife Wanda Nara has proved detrimental to his performances and he has not scored since.

Nevertheless, Icardi’s prowess in front of goal has not been questioned after several seasons of consistently netting high numbers.

And Tottenham are in need of another forward with Kane experiencing his own confidence crisis.

In 12 Premier League appearances, the England captain has scored just once while Heung-min Son has had to take up the mantle with five over the same period.

But Conte is desperate to find another forward with Kane the only recognised out-and-out No 9, while Son and others such as Steven Bergwijn and Lucas Moura merely can operate there rather than specialise in the position.

Harry Kane has scored just once in the Premier League this season (Image: GETTY)

Whether Icardi signs or not, Spurs are still in the market for a forward that could spell a contingency plan for a potential Kane departure.

Fiorentina star Dusan Vlahovic remains a top target at Tottenham with Fabio Paratici keen to utilise his Serie A sources to beat Juventus to a deal.

The Serbia international has told his club he will not renew his contract, which has forced them into selling.