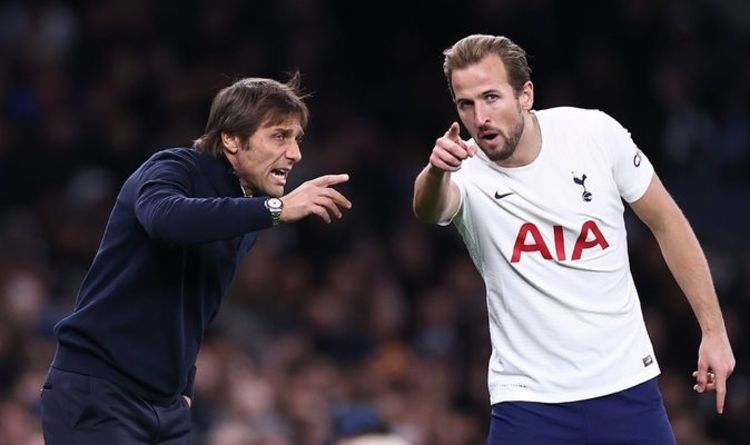 Antonio Conte and his staff at Tottenham have reportedly been working hard to change the mentality of Harry Kane to ensure he's ready to stay with the club beyond the January transfer window. Following this summer's dramatic transfer saga in which Kane told Daniel Levy he wished to leave Tottenham, there remain lingering fears that the Spurs talisman would still be open to a departure.

Kane then U-turned his decision and vowed to fight on under new boss Nuno Espirito Santo at the beginning of the campaign before the Portuguese was sacked.

But the appointment of Conte appeared to be a line in the sand and the start of a new exciting era in north London.

Despite the embarrassing Conference League defeat at Slovenian side Mura, Tottenham have shown signs of improvement in the Premier League.

They are now up to sixth and just two points adrift of West Ham in fourth but with a game in hand to their name.

Antonio Conte has been working on Harry Kane's mentality and psychology (Image: GETTTY)

Conte is expected to be handed cash to spend in January as he begins to start strengthening his pack and putting his very own stamp on his team.

Kane will of course remain central to those plans and the England captain has a big role to play moving forward as Spurs target Champions League qualification and trophies.

According to journalist Rahman Osman, Conte and his team have already been working on the mentality and psychology of Kane since they arrived at the club.

It's reported that Conte has told Kane that winning the Premier League with Tottenham, his boyhood club, would mean twice as much as winning it elsewhere.

Manchester City could still return for Kane after having two bids rebuffed by Tottenham before the start of the new Premier League season.

Conte helped totally transform the mentality of Romelu Lukaku during their time together at Inter Milan, where they won the Scudetto in their second campaign together.

Lukaku moved to the San Siro from Manchester United, where he failed to cement his place as the club's first-choice No 9.

The Belgian was made to feel cherished again in Milan by Conte as he helped Inter regain their crown from Juventus at the summit of Serie A.

Kane has still only managed just one Premier League goal this season in the Premier League in 12 outings, meaning he is on course for his lowest tally yet since bursting onto the scene in 2014/15.

Antonio Conte is desperate to build around Harry Kane at Tottenham (Image: GETTY)

But he did recently admit that this summer's transfer saga - coupled with Euro 2020 heartbreak - has taken its toll on him, both mentally and physically.

“A lot people talk about [the impact] physically, what tournaments take out of you and pre-seasons and going straight back into a season, but mentally, as players, you go through a lot as well,” he said.

“You go through the highs and lows of a major tournament, coming so close to a dream and it being taken away from you in such a quick moment, and then it was my first summer of transfer speculation, having to deal with those situations. So, of course, it takes a toll mentally.”

Kane will be looking to find his shooting boots once again when Spurs host Norwich this weekend.