Everything Corberan said on Huddersfield injuries, Swansea and takeover rumours 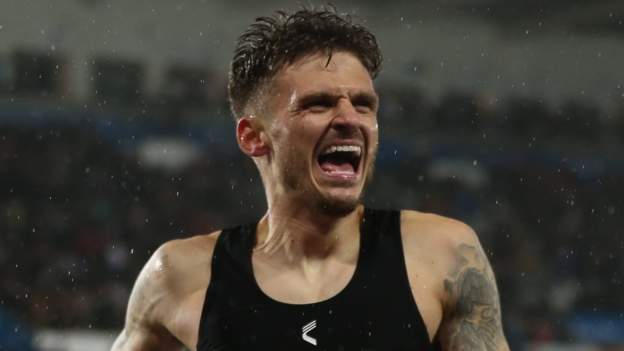 Forward Jamie Paterson is Swansea's second highest goalscorer this season after Joel Piroe, while he also has four assists

Swansea City expect Jamie Paterson to trigger an extension clause in his contract following his spectacular start to life at the Championship club.

Paterson, 29, has been a revelation since joining Swansea in August.

The forward's form has prompted speculation that he could be a January target for rival second-tier teams, but Swansea are confident Paterson will remain with them.

"He is loving it here, loving the training and playing, and he's getting some important goals for us.

"We are cognisant of that and aware that Jamie is someone that we would like to keep at the club. Suffice to say we are confident and comfortable with where we are."

Paterson joined Swansea on an initial one-year deal in August, having been a free agent after leaving Bristol City at the end of last season.

The former Walsall, Nottingham Forest, Huddersfield Town and Derby County player has featured in all 21 of Swansea's league games so far this season, scoring eight goals.

It is understood he is close to triggering a 12-month extension to his contract based on his tally of Swansea appearances in 2021-22.

"Hopefully he can keep growing with us," said head coach Russell Martin.

"I think the fans really love Pato and I think he feels so accepted here for who he is, and feels the warmth and love from everyone.

"Whenever you're trying to perform, if you don't feel that it becomes difficult. When you feel that you feel confident."

Paterson, Martin's first Swansea signing, had spent part of pre-season on trial at Middlesbrough before agreeing the move to Wales.

"He was the first guy we called when we took over because we realised his situation," Martin added.

"Fortunately for us the owners supported us on that and I think he's probably exceeded a lot of people's expectations."

Paterson was one of four permanent signings made by Martin in the summer, alongside Flynn Downes, Michael Obafemi and Olivier Ntcham, while Ethan Laird and Rhys Williams joined on loan.

Swansea are hopeful of bringing in more new faces during the January transfer window, while it could well be that some players who are not getting much game-time move on.

"One thing I can guarantee is that there will be a lot of dialogue in January," Allen said.

"Hopefully off the back of that there may be some activity. I don't think we are looking at wholesale [changes]. I think tweaking is the best word."

Allen is overseeing a restructure behind the scenes at Swansea, with the club looking to recruit new heads of performance and analysis.

Swansea are also reshaping their recruitment set-up following the departure of Andy Scott.

"That area will be split into two distinct roles. One will be as a chief scout - that person's role will be responsible for talent identification," Allen explained.

"The other arm is what I call player acquisition. That's more of a relationship and management role that will be closely aligned and dealing with other clubs, agents, suppliers and departments, and will oversee the acquisition of a player once the ID part has been completed."