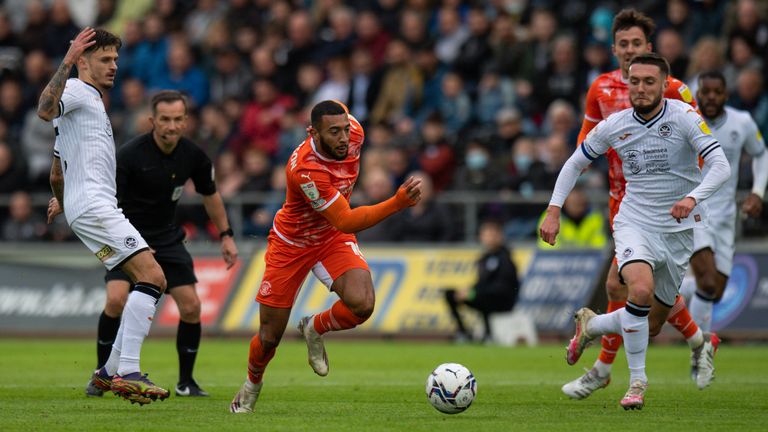 This was an evenly-contested match for the most part with a first-half goal from Joel Piroe putting Swansea ahead, but a late effort from Anderson meant the Welsh club had to settle for a draw.

Swansea had the first real chance of the game when Ethan Laird put Olivier Ntcham straight through on goal but the striker's shot was comfortably dealt with by Daniel Grimshaw.

Blackpool knocked Swansea out of their stride in the opening stages of the first half with their slick passing game causing the hosts a lot of problems, but Russell Martin's side soon recovered.

The hosts pleaded with referee Keith Stroud for a penalty when Laird was brought down in the box by Reece James, but it was waved away by the officials.

Blackpool had a lot of the ball but lacked a cutting edge in the final third, but their best chance of the first half came when Jerry Yates found himself one-on-one with Ben Hamer who saved a low shot from the in-form striker.

But Swansea continued to apply pressure on Blackpool, and they eventually took the lead in the 35th minute.

With Swansea passing the ball so fluidly Piroe was found in space and the striker fired a 25-yard volley into the back of net for his 11th goal of the season.

Swansea were now in the ascendancy as they controlled possession for the remainder of the first half and they turned around with a 1-0 advantage.

Swansea began the second half in the same manner they finished the first as they proceeded to apply a lot of pressure on the Blackpool penalty box. The Welsh club had another penalty plea turned down when Ntcham was barged off the ball.

Blackpool's Dujon Sterling was shown the first yellow card of the game in the 54th minute after tugging the shirt of Flynn Downes. The Seasiders began to enjoy some possession and looked a bit more threatening with a shot from Yates just wide of the post.

Blackpool had more of the ball in the closing stages of this match as they tried to find a way through the Swansea defence. Jordan Gabriel found himself through on goal with eight minutes remaining, but Hamer just about cleared his lines.

But Blackpool finally broke Swansea's resistance in the 86th minute when a shot from Anderson from just inside the box found the back of the net, after the home side had failed to clear their lines.

Blackpool pushed hard for a winner late on and came close when Anderson's shot was cleared off the line by Ryan Manning.