Swansea’s Russell Martin: ‘If you don’t believe in what we’re doing, no problem’
The Guardian 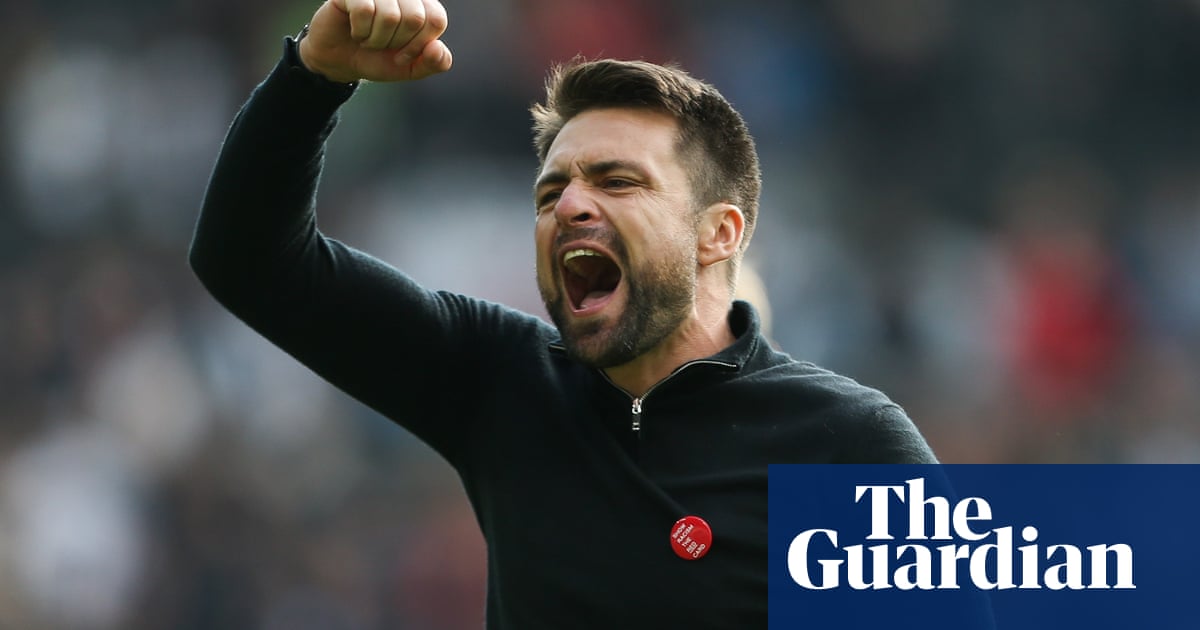 It is fair to say the standard of the Wednesday five-a-side league has improved of late at Penyrheol leisure centre, where Swansea supporters have been duelling with familiar faces, including the head coach Russell Martin and technical coach Matt Gill. Unsurprisingly, the staff team are top of the league, set up by the longstanding groundsman at the club’s Fairwood training base, Kevin Roberts, who usually assumes the role of referee. “I told off our kit man, Mike, for playing too many Hollywood passes last week,” says Martin, laughing. “‘Just keep it simple!’ He was fuming. We play the Swans way.”

Over the years, Roberto Martínez, Brendan Rodgers, Michael Laudrup and Graham Potter set up Swansea to dominate. Martin, too, believes in a possession-based style and fans are enjoying what they are seeing. The team have had a greater share of possession in every Championship game this season – only Potter’s Brighton enjoyed more of the ball against them – and in victory against Peterborough last month they completed 779 passes. They average 537 short passes a game – almost double Saturday’s visitors Blackpool – but Martin knows not everybody agrees with his thinking despite four wins in the past six matches. “If you don’t believe in what we’re doing, no problem, but we really do,” he says.

They rank first in the division for forward passes and successful passes into the final third but one of the biggest things, Martin says, is “ball speed” and keeping the ball in play – they have for a league-high 54 minutes, four more than the average. “You always get people who say, ‘Possession doesn’t mean you win’, but if you have the ball and you have it a long way from your goal, your chances of conceding become much smaller,” says the 35-year-old, the youngest manager in the top four tiers. “For us, it is about taking as much fight out of the game as we can and controlling it with the football.”

In March his MK Dons team set a British record, since such records began, for the most consecutive passes leading to a goal, Will Grigg rounding off a 56-pass move. A week later, a video of Martin staunchly reiterating his desire to polish plan A rather than adopt a plan B went viral. “If it doesn’t work and I get sacked, at least I get sacked doing something I believe in. I don’t get sacked regretting that I have bowed on my principles.”

Will Grigg, the MK Dons No 9, celebrates after finishing a 56-pass move. Photograph: James Chance/Getty Images

The clip has chalked up almost 400,000 views. “It wasn’t a big deal to me – it was just common sense. It helped us build a bit of siege mentality. It was like: ‘Look, no one believes we can do this and no one wants us to be successful doing this.’ It’s the British mentality towards football. Traditionally, it’s been about rolling your sleeves and fighting but, slowly but surely, it’s changing.”

His impressive work in League One saw Swansea come calling in the summer. He spoke to Potter and Owain Tudur Jones, with whom he played at Norwich, before moving his family to south Wales. “We’re loving it. I swim in the sea as much as I can, after training or on days off.” His 10-year-old, Reno, has joined Swansea’s academy and his youngest, Leo, is in the pre-academy with the midfielder Korey Smith’s eldest and the former winger Nathan Dyer’s son. “If you’re coaching an under-six, the first thing you want them to do is get them comfortable with the ball. It’s not run, it’s not run the channel, it’s not kick it really far, it’s not ping it or shoot, it’s try and control the ball with two feet. That principle, as basic as it sounds, is the same here.”

Martin is engaging company. Conversation spans from asking MK Dons to invest in recycling bins to Marcus Rashford pushing the envelope and Cop26 appearing a box-ticking exercise. “There were two weeks of lots of conversation but without much consequence. It was like: ‘We’ll get together in this room, we’ll chat about it, show people we care and then we’ll just see what happens.’ That tends to be the way of leaders at the minute. When you have the opportunity to try, at least show people you are really trying.”

Swansea’s Ethan Laird keeps the ball moving in the win over Peterborough during which the team completed 779 passes. Photograph: Ashley Crowden/Huw Evans/REX/Shutterstock

At least it seems football is prepared to tackle big issues, be it the climate crisis, racism or human rights. “Footballers have been told for so long: ‘You’re role models, you have to behave properly.’ But when they put their head above the parapet and say something that some people don’t agree with, it’s like: ‘No, no, no you’re a footballer, put yourself back in your box.’ When the footballers are showing a lot more decency than the prime minister and a lot of the government officials, then there is a bit of a problem.

“Talking about politics now, I’m getting angry,” he says, and so we turn back to football. After all, there is an 8pm kick-off in the Phil Owen Memorial League on the horizon. This week they won 10-4. “We go one-nil up and keep the ball for ever,” he says. “It can get a bit tasty. But I enjoy it. This is such a good place in terms of the people, how friendly they are, how supportive they have been. I think they can see we’re trying to do something that is really aligned with what the club has done previously, in its modern history.”