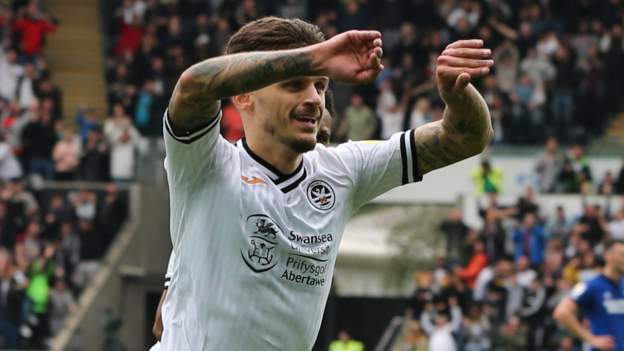 Cardiff have also been in touch with Swansea and the EFL over incidents which occurred at last Sunday's game.

The Bluebirds are unhappy with Swansea's celebrations, and say their directors were abused.

"We can confirm that we are in dialogue with Swansea City, South Wales Police and the EFL over a number of issues of concern," a Cardiff spokesperson said.

BBC Wales understands Cardiff's chief complaint is over the 'swim away' celebrations performed by a number of Swansea players - including man-of-the-match Jamie Paterson - and head coach Russell Martin.

The swimming gesture is a reference to a clash between rival supporters following a derby encounter at the Swans' former Vetch Field home in the late 1980s.

Cardiff, who were beaten 3-0, feel the gesture is highly provocative and threatens to escalate tensions between the two sets of fans.

Cardiff are also unhappy that shots of manager Mick McCarthy followed immediately by chief executive Ken Choo and director Steve Borley were shown on the big screen at the Swansea.com Stadium.

They say that led to Choo and Borley being verbally abused by home fans and feel Swansea should not have allowed the images to be shown.

EFL rules say shots of "the area of the trainers' bench" should not be shown on big screens but there are no regulations regarding directors' boxes.

"Swansea City can confirm that the club is in dialogue with Cardiff City, South Wales Police and the EFL over events that took place during and after Sunday's game at the Swansea.com Stadium," a Swans spokesperson said.

"Discussions will also take place within the club across all departments as a matter of process, as they do after every event that we host."

The EFL has not commented, while it is understood the Football Association (FA) is looking into the 'swim away' gestures.

In 2013, then Swansea midfielder Jonjo Shelvey was reminded of his responsibilities by the FA after making the gesture during a Premier League game at Cardiff.