Swans and Cardiff to unite in anti-racism
BBC Sport 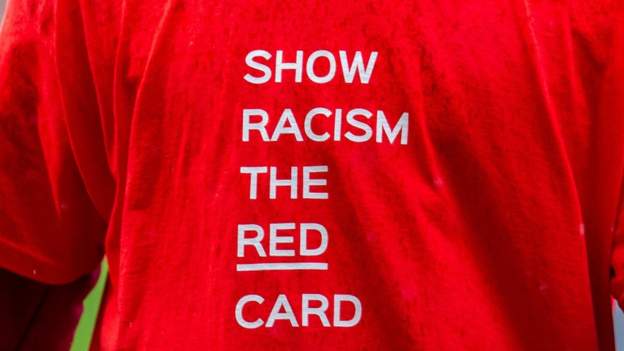 Swansea and Cardiff continue to support the anti-racism message

Both sets of players, as well as officials, will warm up in Show Racism the Red Card Cymru T-shirts.

The fixture between the Championship sides will be using the slogan 'Rivals on the Pitch, United Against Racism'.

"This is an important message that everyone at Swansea City feels very passionate about," Swansea chief executive Julian Winter said.

Winter's Cardiff counterpart, Ken Choo, said: "Whilst our on-field sporting rivalry with Swansea City will reignite on Sunday, our united stance alongside them and their supporters in delivering this important message is absolute.

"I'd like to thank all involved for their commitment to this cause which must remain at the top of all clubs' agendas."

"As we have seen recently, racism and discrimination is sadly still evident in the game, and our players have been subjected to vile and disgusting abuse over the course of this year," Winter added.

"In April we took the unprecedent step of becoming the first football club in world football to take a social media boycott, and we continue to have the strongest view on eliminating racism and discrimination from the game we all love.

"With huge focus on the south Wales derby, this is the perfect opportunity for both clubs to unite and deliver an important message - rivals on the pitch, united against racism. It's time for change."