The issue now is if Wales ‘don't’ walk off the pitch ... - Swansea City News 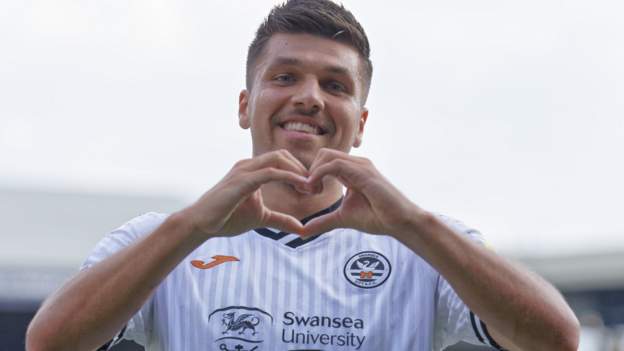 Swans' Piroe aims to live up to Van Nistelrooy comparison

No Piroe, no party.

It is the fans' chant which has been the theme tune of Swansea City's season so far, given Joel Piroe's impact since arriving from PSV Eindhoven in the summer.

Swansea were taking a risk when they decided Piroe, a youngster with just one Eredivisie start to his name, was the man to fill the considerable void left by Andre Ayew.

Yet already the transfer fee - of around £1m initially - to bring Piroe to Wales looks like money well spent.

Piroe, who was once likened to Ruud van Nistelrooy and might have joined Juventus at one stage, has pedigree. And it shows.

In 11 Swansea appearances - only eight of which were starts - Piroe has scored six goals. He has found the target in every game in which Russell Martin's Swansea have taken points this season, aside from goalless draws.

There were classy winners against Bristol City and Huddersfield, plus a last-gasp leveller to cap a memorable comeback at Luton Town.

"I am just happy to play a lot and to contribute with the goals," Piroe tells BBC Sport Wales.

"I have given myself a big boost and also my team-mates. I feel like they really trust me. They really want to create opportunities for me, so it's the perfect start."

In his younger days Piroe was a winger who sometimes played as an attacking midfielder. Then his under-14s coach moved him up front.

"He said 'why wouldn't you play as a striker? You always score'," Piroe recalls.

By the time he was an under-15, Piroe was playing for the Netherlands.

He played through the age grades to under-20s, making a name for himself at the 2017 Under-19 European Championship with a hat-trick against Germany.

Piroe suffered concussion a couple of minutes into the Netherlands' second game at the tournament and did not feature again, but had already done enough to be joint winner of the golden boot.

It was around that time that comparisons were drawn with former Manchester United striker van Nistelrooy, who coached Piroe at PSV.

"It's a big honour to be mentioned in the same sentence as van Nistelrooy," Piroe says.

"When I first saw him at the training ground at PSV, I wanted to ask him so many questions because he knows what it's like to play in the biggest league, in the biggest games.

"As a striker you always have to be calm. He was like that - everyone wants to be like that."

Piroe, who turned 22 in August, might have left PSV as a teenager, when he was linked with a raft of heavyweight clubs including Manchester City, Chelsea and Paris St Germain.

Juventus were reported to have made an official approach in 2018.

"It was true," he says. "It was a big honour [that Juve were interested]. Nobody knows what is the right choice. I just had a better feeling to stay at that moment.

"It was a big decision. I thought a lot about it. I just followed my feelings."

At the time Piroe was playing for Jong PSV - the reserves - in the Netherlands' second tier.

His top-flight debut came during a loan spell at Sparta Rotterdam in 2019-20, where he was used almost exclusively as a substitute, before a senior PSV bow last season.

Piroe scored once in 11 Eredivisie substitute appearances for PSV, while there were two Europa League goals against Omonia Nicosia last December.

When Swansea showed an interest at the end of the season, Piroe "had a good feeling".

Being omitted from Russell Martin's squad on the opening day of 2021-22 was not the ideal start, but that is already a distant memory.

"He is the gaffer. I don't have hard feelings because I love the honesty he showed me from the first day until now," Piroe says.

"He was very honest with me and said he didn't know me. He just said 'focus on the next game, you will start then, show me what you have got'."

The next game was at Reading in the Carabao Cup. Swansea won 3-0 with Piroe scoring a debut goal.

Joel Piroe has scored five goals in 10 Championship appearances, only seven of which have been starts

Since then his celebrations - hand to ear like a telephone, or the Gareth Bale-style heart shape - have become familiar.

"The phone one I created a long time ago with some friends," Piroe says. "The heart one is for my family because they are sometimes angry when they say I forget them."

The family, Piroe explains, includes girlfriend and fellow footballer Naomi Pattiwael, who has not moved to Wales because she plays for PSV.

"She is really good - a right winger, but sometimes she plays as striker as well," Piroe adds. "She is really fast - she always likes to say she is quicker than me, but I don't think so.

"And I have to say I am the best finisher!"

In a Swansea side short on goals, Piroe's prowess in front of goal has been key to what success they have enjoyed in the early stages of the Martin era.

There is work to do, though, with a club who reached last season's Championship play-off final currently 19th in the table.

The next game is about more than just three points - for the neighbours, Cardiff City, are coming to town.

"It's actually funny because every time I say something about the game against Cardiff, my team-mates, some guys on the staff, start smiling. They are happy - you see some fire in their eyes," Piroe says.

When his song is mentioned, Piroe is the one who grins.

The party, in Swansea at least, will be particularly joyous should he score another key goal this weekend.