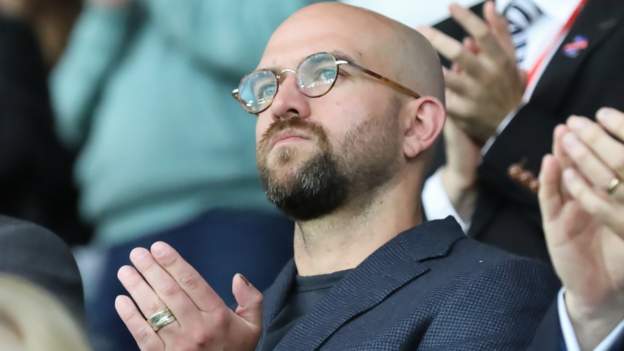 Chief executive Julian Winter says Jake Silverstein is "emotionally invested" in Swansea City and believes he will have a bigger role in the club's future.

Silverstein joined Swansea's board of directors in August 2020.

The American businessman visited the club for the first time earlier this season.

Winter revealed Silverstein will return to Swansea in December, when majority shareholders Jason Levien and Steve Kaplan "may well be over" too.

When he arrived at the club, Silverstein invested in Swansea via a convertible loan.

"I think he's been great," Winter told a fans' forum held at the Swansea.com Stadium on Wednesday.

"In the future, when the loan note is converted - which we are all expecting that it will be - he will then become a shareholder, so he will further embed his time, effort, money and emotions into this football club I would have thought."

Winter said he speaks to Levien when discussing decisions at Swansea, but added: "Jake I think in the future will be involved."

Winter said the aim for Swansea is to return to the Premier League "without a shadow of a doubt" and said the club are in "a debt-free position".

"We don't have bank overdrafts," he said. "For me, in terms of the Championship landscape, this club is in a really strong [financial] position.

Levien and Kaplan bought a 68% stake in Swansea five years ago in a takeover which angered some fans.

The American duo have been criticised for a perceived lack of investment during their time at the helm and for their infrequent appearances in Wales.

Members of Swansea's Supporters' Trust, which owns a 21.1 stake in the club, voted in 2019 to take legal action against the club's current and former owners over the 2016 sale.

The Trust says it was excluded from negotiations over the ownership change.

Terry Sinnett, who represents the Trust as supporters' director on Swansea's board, also took part in the fans' forum. He said Silverstein's arrival had "improved the atmosphere" from the Trust's point of view.

"He has been very willing to engage with us and that's got to be good for us all," said Sinnett.

"He is very convincing. Everybody within Swansea has been sceptical over the years. When the ownership came in, we all saw them I'm sure purely as investors looking to make a quick buck and go.

"That hasn't been the case. With our relegation, the asset value now isn't what it was in the Premier League and the ownership from what we can see has continued to support the club."

When asked at the forum about the possibility of legal action, Sinnett read a prepared statement.

"We recently advised our members that our legal team continue to prepare all the necessary legal documentation and agreements with all parties involved," he said.

"Please be assured that despite this process taking a lot longer than originally expected, this work is due to be completed shortly."

He added: "If and when action is taken, it will not be against the football club, it will be against the sellers and the buyers of shares involved in the 2016 sale of the club."