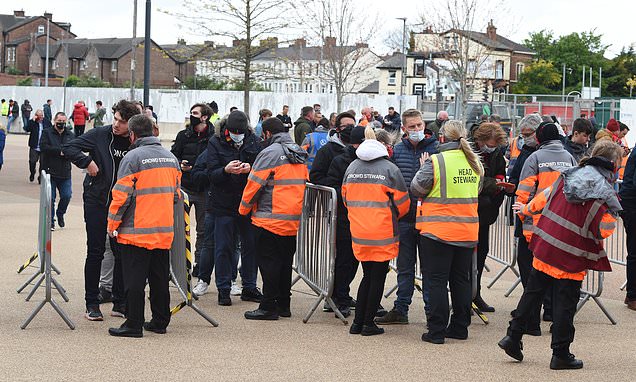 New rules in Wales mean that supporters will have to show NHS Covid Passes to gain entry to large sporting events from today.

The Welsh Government has ruled all over-18s need one to attend outdoor non-seated events for more than 4,000 people and any setting or event with more than 10,000 people in attendance.

The law-change means that fans attending the Championship match between Swansea City and Cardiff City on Sunday October 17 and the Cardiff’s rugby fixture against Cell C Sharks at the Arms Park on Saturday must show a pass.

And the rules will also apply to any English supporters going to games in Wales, even though Prime Minister Boris Johnson decided not to adopt mandatory Covid passports in England this month.


English residents attending this weekend’s fixtures will have to show their NHS Covid passport and West Bromwich Albion fans have already been warned that they will be required to present a pass to gain entry to the Swansea.com Stadium, when the Baggies play away to Swansea on Wednesday October 20.

In this illustration, a woman holds an iPhone with a NHS Covid Pass in Cardiff last week

Peterborough United travel to Swansea on October 30, when the English supporters will have to show a Covid passport but Welsh fans will not have to present their pass when they travel across the border to England for the Swans fixture at Birmingham on October 23.

The position on Covid passports in Britain has fragmented this month. Scotland is set to follow Wales’ lead next week, with Covid passes become compulsory north of the border from Monday October 18.

The Scottish government's vaccine passport scheme came into effect on October 1. However, it will not be formally enforced until October 18, to give venues time to test out their procedures.

From October 11 all over-18s in Wales must use the NHS Covid Pass to show that they are fully vaccinated or have tested negative to attend large events, nightclubs and other similar venues.

To get into these venues you will need to prove one of the following two:

You can use the NHS Covid Pass, or test results emailed or sent by text message are also considered proof of a negative test.

England looked set to lead the way on the controversial measure, with minister insisting earlier this year they would come into force from October 1.

However, the Government backtracked in the face of political opposition and Prime Minister Johnson declared they would only become compulsory as part of a Plan B Covid response, should infections surge this winter.

The Government has not defined the threshold at which the English Covid pass would be mandated, but Professor Neil Ferguson, a member of the Scientific Advisory Group for Emergencies (Sage), suggested last week Plan B could kick in when hospitalisations reach 1,200 per day. The figure on October 5 was 812, up 8.2 per cent on the week before.

To complicate matters further, any Covid passports in England would be based on proof of vaccination only - there would be no provision for a negative test as there is in Wales.

The issue of Covid passports has divided political and scientific opinion.

In Wales, the vote to make their use mandatory was carried by 28 votes to 27.

Speaking to Good Morning Britain today, the Welsh First Minster said: 'Coronavirus has not gone away, it remains a significant threat in the community.

'We are doing what Sage recommended to us - take early action, take the least intrusive action and build your defences against what otherwise may be more significant actions that would need to be taken.'

However, civil liberties groups have objected.

Jodie Beck, from human rights group Liberty, said: "While we welcome the decision to not exclude those who have not received the vaccine from attending large events, the introduction of a vaccine pass in Wales still sets a dangerous precedent.

"Vaccine passports under any name mean more coercion and division, and risk creating a two-tier society where people who are already marginalised will see their rights and autonomy most affected."