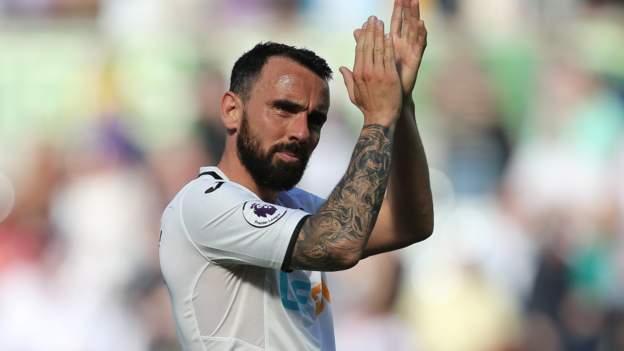 Leon Britton is returning to Swansea City as a player mentor for the Championship club's under-23 squad.

Club legend Britton, 39, is expected to play in some under-23 games and is also likely to assist coach Kristian O'Leary.

The midfielder made more than 500 appearances during 16 years as a Swansea player.

He had a spell as Swansea's sporting director before stepping down to take a break from football in June 2020.

Britton's last Swansea appearance came in May 2018, in what was the club's final Premier League fixture before relegation.

He has played this season for Ammanford in the Cymru South, and will therefore be unable to play for Swansea's under-23s before the January transfer window.

Swansea are following the likes of Manchester United, Brighton and Southampton by adding an experienced player to their development squad.

Mark Allen, who followed in Britton's footsteps when he became Swansea's sporting director in August, says his return will have a positive impact on the club's development squad.

"This is a fantastic opportunity for the young players at Swansea City to learn from Leon - he's been there and done it and is a fantastic role model," said Allen.

"This isn't a role which will prevent our players having an opportunity to play - Leon won't play every minute of every game - it is a role which will bring so many benefits to the young lads in the academy who are hoping to move into the first-team frame."