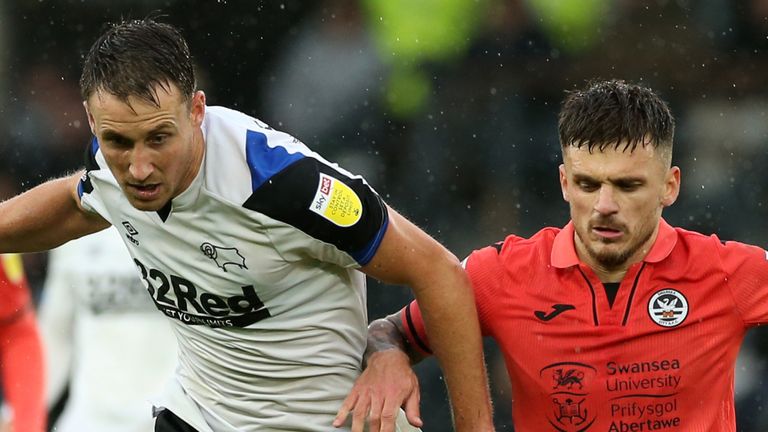 Derby delivered another spirited display to hold Swansea to a 0-0 draw at rainswept Pride Park.

Swansea dominated for long periods of the game but only forced Ryan Allsop into one serious save.

Derby, who were docked 12 points after going into administration two weeks ago, could have snatched a second victory in four days but for Ben Hamer, who made a triple save to deny Tom Lawrence early in the second half.

Swansea made a confident start and forced Allsop into action in the eighth minute.

Joel Piroe made a good run down the left and played the ball across for Korey Smith 10 yards out, but Allsop got down to his right to block the shot.

Piroe had a good chance in the 15th minute when he burst into the box but was tackled as he tried to turn inside a defender and Derby cleared.

Swansea were getting plenty of possession around the Derby penalty area and Piroe had a shot on the turn deflected behind before Joel Latibeaudiere headed wide at the back post in the 23rd minute.

Derby were struggling to get out of their own half, but for all their dominance, Swansea had not tested Allsop since that early save and they came close to conceding in the 35th minute.

Jason Knight pounced on a loose pass and surged into the box before firing in a low cross which flashed across the six-yard box.

Derby had their first attempt at goal in the 52nd minute when Knight fired at Hamer from distance, but the goalkeeper was called into more significant action a minute later.

Lawrence broke away but Hamer blocked his drive before saving the next two shots from the Wales international.

Derby were having their best period and it needed a great tackle from Jamie Paterson to deny Knight when he was poised to strike.

Swansea responded with an attack that saw the ball pinballing around inside the area, but Derby's defence again stood firm.

The visitors had another chance in the 75th minute when Jake Bidwell crossed from the left, but Smith could not get over his header at the back post and Allsop saved easily.

Derby almost caught Swansea on the break in the 83rd minute. However, Lawrence could not get enough power in his shot to trouble Hamer.