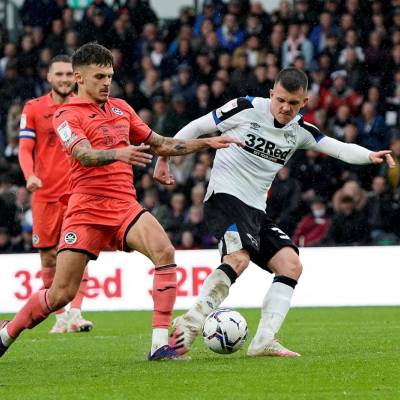 Swansea dominated in terms of possession in the first half at Pride Park Stadium but clear chances for both sides were limited as the Rams defended strongly as a unit across the pitch.

Goalkeeper Ryan Allsop made the most noteworthy save of the opening 45 minutes as he kept out Jake Bidwell’s effort for Russell Martin’s side in the early exchanges.

Derby were much livelier and posed more of an attacking threat after the break and skipper Tom Lawrence forced three successive stops from former Rams loanee Ben Hamer in the Swansea goal after he won possession in midfield and drove into the Swans’ penalty area.

Both sides showed their intent to win the game by pushing forward in an entertaining encounter but, ultimately, they had to be happy with a point apiece going into the October international break.

Derby have now won two and drawn four of their six league games on home turf this term and once again showed plenty of grit, desire and character to add another point to their tally.

Manager Wayne Rooney made one change to the side that defeated Reading 1-0 under the Pride Park floodlights on Wednesday night with youngster Jack Stretton making his first league start.

The 20-year-old replaced the injured Sam Baldock in attack while Allsop continued in goal, following an impressive display against the Royals, despite Kelle Roos returning from a one-match ban for his red card in last Saturday’s defeat at Sheffield United.

With a sense of autumn in the air and constant rain throughout the afternoon, the sides walked out ahead of kick-off onto a pitch with plenty of zip to it and the wet conditions made for a fast-flowing game between the Rams and the Swans.

Attacking towards the North Stand in the first half, Derby settled well early on, but it was Swansea who carved out two decent opportunities inside the opening ten minutes to take the lead.

A neat move on the edge of the Rams’ penalty area saw skipper Matt Grimes curl an effort narrowly wide with his left foot after eight minutes, while Allsop was called into action moments later to make a good save from Bidwell’s shot from around 12 yards out after the full-back burst into the penalty area and latched onto Joel Piroe’s cut-back.

The visitors, as expected because of their style of play, enjoyed plenty of the ball early on and that meant Derby had to compact and switched on from a defensive aspect. Therefore, it meant there were opportunities to catch the Swans on the counterattack when they did regain possession.

The home supporters importantly remained behind the side as they weathered the early storm as Swansea continued to enjoy the better of the play as the game hit the half hour mark.

Derby’s first big moment of danger came after 34 minutes as midfielder Jason Knight won possession and drove at the visitors’ backline. After advancing into the box from the left-hand side the Republic of Ireland international flashed a low ball across the six-yard box which evaded the onrushing Stretton.

Rooney was forced into a change in the closing minutes of the half as defender Richard Stearman was forced to be replaced due to injury, with Lee Buchanan entering the action in his place. That meant a slight re-jig in the backline with Craig Forsyth reverting to centre-back and the England Under-21 international slotting in at left-back.

No further chances came for either side as the half concluded following two minutes of added time and the Rams had 15 minutes to regroup and look to find a way to impose themselves on the game in the second period.

Derby made another change at the break with youngster Dylan Williams coming off the bench to replace Ravel Morrison. The Jamaican international, as an attack-minded midfielder, saw little of the ball in the first half as Rooney’s side soaked up plenty of pressure and Williams’ introduction saw the side revert to a back five.

Derby were noticeably more energetic as they looked to regain the ball with Rooney’s words of wisdom clearly ringing in their ears. That was something that nearly paid off early in the second period as Lawrence latched onto a loose pass from the halfway line to drive into the box. Hamer kept out his initial shot before two further efforts, both from the Rams’ captain, were kept out by the one-time Rams loanee.

Derby were knocking on the door far more as the hour mark approached and the South Stand was full voice as a crowd of over 21,000 roared the Rams forward. Knight had a shooting chance inside the box, after good work by Graeme Shinnie, but Jamie Paterson got back to nick the ball off his toe as he pulled the trigger.

Rooney made the side’s final change just after the hour a Republic of Ireland Under-21 international Festy Ebosele, back from injury, replaced Stretton to provide a different dynamic in the attacking third for the Swansea backline to face up against with his raw pace and power.

Swansea had a chance with 15 minutes left to take the lead as Bidwell got forward down the left and delivered an inviting cross for Korey Smith at the far post, but he was unable to guide his header towards goal and Allsop easily gathered his effort.

Substitute Ethan Laird saw a shot deflected wide for the visitors minutes later after the Rams cheaply conceded possession inside their own box before Paterson fired narrowly over the bar from the resultant corner as the hosts began to apply another spell of pressure.

Lawrence was thwarted by Hamer again as the minutes ticked away with the Welshman this time cutting inside from the right-hand side and forcing the shot-stopper into a routine save from his low drive with his left-foot.

That proved to be the final real opportunity as the final stages petered out but, once again, there was plenty to be positive about as the Rams once again dug deep to pick up another valuable point in their quest to overcome the advertising of a 12 point deduction for entering administration last month.

Derby’s next game, following the second international break of the season, will see them head to Preston North End on Saturday 16th October (3pm kick-off).