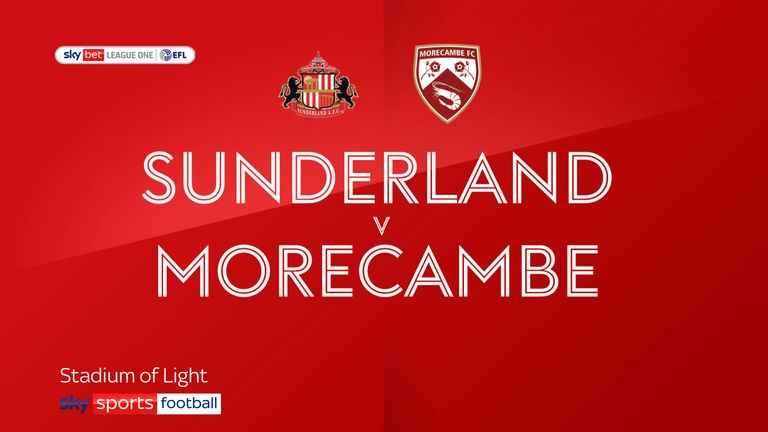 Sunderland claimed their joint-biggest win of the season as they thrashed Morecambe 5-0 at the Stadium of Light.

Sunderland burst out of the blocks, scoring twice inside the opening 17 minutes, with wing-back Lynden Gooch claiming the assist on each occasion.

Gooch burst past Morecambe full-back Ryan McLaughlin to deliver a cross from the left in the 13th minute and while Stewart's first-time shot was directed close to Kyle Letheren, the goalkeeper was unable to keep the ball out.

This time, it was Broadhead applying the finish, with the Everton loanee pulling away from his marker to head home from the edge of the six-yard box.

Stewart missed an excellent chance to claim a third goal before the interval, prodding a first-time shot wide, but Aaron Wildig should have hauled Morecambe back into the game midway through the first half.

The midfielder was unmarked as he met Alfie McCalmont's cross but stabbed a hurried shot over the bar.

Substitute Toumani Diagouraga also went close for Morecambe at the start of the second half but Sunderland put the game to bed with a third goal shortly before the hour mark.

Dan Neil cut the ball back from the byline and Pritchard swept home a clinical first-time strike.

The hosts claimed their fourth in the 68th minute, with Broadhead twisting and turning in the area before drilling a low shot past Letheren from 12 yards.

Sunderland added a fifth with three minutes left as Dajaku's shot took a hefty deflection before looping over Letheren and finding the back of the net.