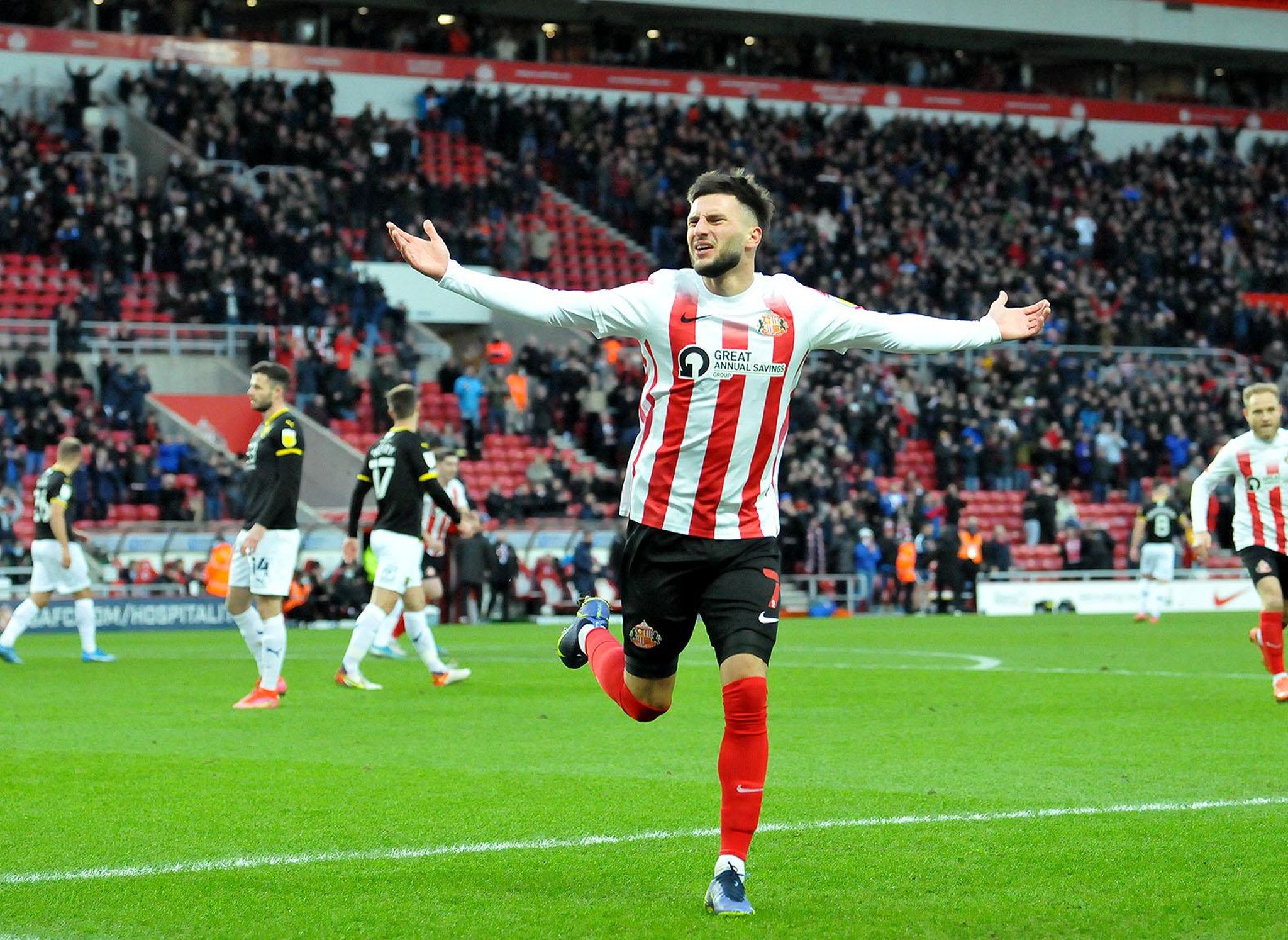 Despite dominating large parts of the second half Lee Johnson’s side were unable to find a winning goal, with Karl Robinson’s side holding on to what would prove to be a valuable point in their campaign.

Johnson’s side got off to the perfect start whe Leon Dajaku fired his side into the lead, but an error from Lynden Gooch allowed the visitors to level through Matty Taylor as half time approached.

There had been little to seperate the sides through the first half, but Sunderland took control in the second and were twice denied by the woodwork in their search for an elusive winner.

Leon Dajaku celebrates his early goal at the Stadium of Light

Johnson reverted to the side that had begun the game against Cambridge United last week, and the start was purposeful.

As expected Oxford United saw plenty of the ball, but there was a step up in the intensity of Sunderland’s press and when they won possession they were quickly trying to release their forward players.

A bright start yielded a reward just six minutes in, when Alex Pritchard pounced on a loose pass just inside his own half, His play from there was superb, instantly driving into the space left through the centre of the pitch. Around 25 yards out he picked the pass, releasing Dajaku on the overlap. The German still had much to do and did it well, weaving away from the defenders in the box and firing an excellent left-footed finish past Simon Eastwood.

Either side of the goal the Stadium of Light had risen as one, joining supporters around the country with a minute’s applause in tribute to

The visitors were just about back to full strength following a recent COVID-19 outbreak, and unsurprisingly began to play their way into the game.

The risk and reward of Dajaku’s wing-back role was quickly visible, Karl Robinson’s side firing the ball into his channel at the first opportunity. Gavin Whyte was finding space and time to drive at the home defence, with only a poor final ball preventing them from ceding clear cut chances.

Sunderland looked a threat when they won it back, but were just lacking the precision in the pass to open up threatening counter-attacks.

The intensity of the game was high, but the rhythm was affected by a string of soft fouls that regularly broke up play.

The Black Cats were just beginning to lose their way on the half-hour mark, and the equaliser did not come as a major surprise.

Lynden Gooch was adamant that he had been fouled when Nathan Holland robbed him of possession high up the pitch, but the referee waved play on. Holland drove into the box and played a simple pass inside to Taylor, who fired into the far corner.

That did stir Sunderland into life, the decibel levels rising as the home side felt that they should have been awarded a handball when Brannagan blocked a cross from Winchester at close range.

The home side finished the half on top but without testing Eastwood any further, and it felt as if the break could be a welcome opportunity to reset and find some composure in possession.

Johnson took the opportunity to switch his wing backs, and the home side were noticeably more composed on the ball at the start of the second half.

Though clear cut chances evaded them, they were seeing a lot more of the ball and in much better areas of the pitch, one or two threatening crosses just not quite dropping for their intended target.

Oxford rode through that initial pressure, but almost gifted up a goal just before the hour mark. Dajaku was not tracked as he he drifted across the box, and was able to gather a sloppy backpass. He teed up Stewart who crashed an effort off the crossbar, before Winchester gathered the loose ball and fired just wide.

The Black Cats were creating more openings, drawing a save from Eastwood when Gooch gathered a diagonal pass from Winchester, his inswinging cross headed too close to the goalkeeper by Stewart.

Johnson looked to build on that momentum by introducing Embleton and switching to a back four, and it almost led to a goal when Gooch fired over following a deflected Pritchard free kick.

Though Oxford went close when Gooch fired a loose pass to the feet of substitute Agyei, Sunderland continued to threaten and went close when Broadhead fired just wide of the far post from the edge of the area.

The Everton loanee went even closer with ten to play, released in the box by neat passing through Pritchard and Embleton. After taking one touch the striker fired a crisp half volley off his right foot, striking Eastwood’s shoulder before bouncing off the outside of the post and wide.

By now Oxford were clinging on, but that proved to be Sunderland’s most dangerous moment.

The hosts saw most of the ball through the closing stages but were unable to open the visitors up again, forced to settle for a point.