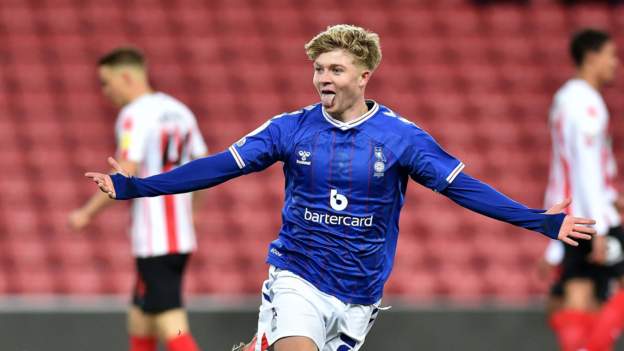 Papa John's Trophy holders Sunderland were knocked out of the competition after their 1-0 defeat at home to out-of form Oldham Athletic.

The Latics are without a manager and 23rd in League Two, having lost seven of 10 games coming into the tie.

Elsewhere, Arsenal Under-21s came from 2-0 down to hold Ipswich to a 2-2 draw before winning 4-3 on penalties.

Kayden Jackson scored twice at Portman Road to send the Tractor Boys into a half-time lead, but an own goal from Kane Vincent-Young and an equaliser from Folarin Balogun three minutes later took it to spot-kicks.

Omari Hutchinson scored the decisive spot-kick to complete the comeback and put the Gunners into Saturday's draw.

Lee was appointed prior to Wednesday's tie but will not take charge until Saturday's FA Cup fixture against Lincoln, with Mark Shelton and Will Goodwin scoring either side of Jaden Brown's own goal to send Pools into the next round.

League One bottom side Crewe beat fellow strugglers Doncaster Rovers 2-0 to go through to the last 16, courtesy of goals from Ben Knight and Oliver Finney.