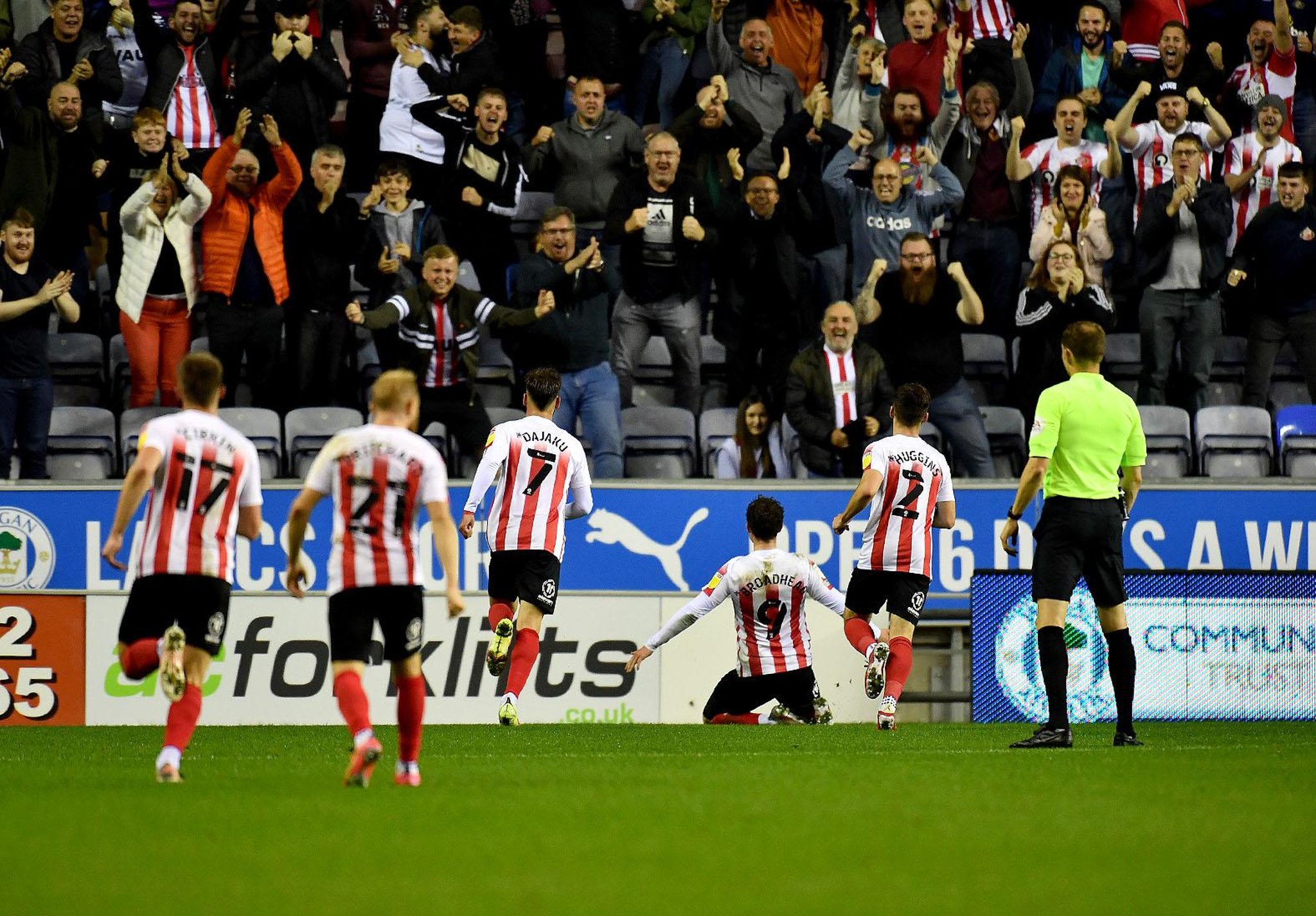 With Storm Arwen swirly in the open Abbey Stadium, the Black Cats had to survive a barrage of set plays in the second half to preserve their narrow advantage.

They had made the most of having the conditions in their favour during the first half, with Alex Pritchard scoring direct from a corner and Nathan Broadhead producing a stunning strike either side of Sam Smith’s equaliser.

It was a crucial win for the Black Cats following their inability to beat ten-man Shrewsbury Town in midweek, and one that leaves them again in a relatively strong position in the push for automatic promotion.

Injuries had a major impact on Lee Johnson’s preparations for the game with seven senior players already ruled out, and there would be one more hurdle to overcome just moments before kick off.

Having been recalled to the starting XI, Corry Evans suffered an injury in the warm up and had to be replaced by Lynden Gooch. The away bench already had a very youthful look, and now Johnson was left with just six substitutes.

The change initially did little to disrupt Sunderland, who switched ends to get the wind on their backs.

Though Cambridge United had the first effort when Smith saw an effort deflected wide, it was clear that the conditions would be a huge advantage to Johnson’s side through the first 45 minutes.

The home side were struggling to build any rhythm in possession, any long balls from the back blowing straight back into a dangerous area.

Sunderland were pressing well and getting up the pitch, and should have been ahead when Broadhead was released with a fine through ball. The Everton loanee just delayed his shot too long, and when the ball broke to the edge of the area Carl Winchester could only fire high into the stands.

Sunderland were ahead 18 minutes in, a good strike but one that owed much to the conditions.

Alex Pritchard floated a dangerous corner to the back post and with an assist from Arwen, it bounced off the inside of the post and beat Mitov on the Cambridge goal.

He would go close with another corner not too long after, this time to the near post, to highlight the challenge facing Cambridge.

On multiple occasions attempted clearances from Mitov would result in a thrown in deep in his own half, ensuring Sunderland could maintain the initiative.

The home side did manage to offer some threat, mostly through the superb play of the evergreen, 39-year-old Wes Hoolohan.

The attacking midfielder played some superb through ballsm and finally got his reward when Smith again cut in and took aim. Hoffmann seemed to be caught wrongfooted, and this time the ball found the bottom corner.

The lead last barely five minutes, the Black Cats producing a neat passing pattern down the right flank. Gooch played the ball infield where Broadhead spun away from his marker with an excellent touch. His strike from 25 yards was even better, arrowing into the top corner and leaving Mitov with no chance.

Stewart went close to making it three from the edge of the area just before the break, with the Black Cats worthy of their lead.

Their issue was that conditions were worsening with every passing minute, and in the second half the momentum would be with Cambridge.

The visitors started the second half well, keeping possession wherever possible and building some promising moves.

Cambridge were now able to break quicker and with more purpose, though, and drew a decent stop from Hoffmann when Ironside headed a Hoolahan free kick towards the bottom corner.

As they had been for Sunderland in the first half, set pieces were a huge weapon in the conditions and they twice almost produced an equaliser, Stewart doing superbly to clear at the near post.

Despite that threat the Black Cats were having some promising moments of their own, aided by the fact that Hoffmann had made a smart adjustment from watching the first half and was keeping his long balls flat and out of the wind.

That helped relieve pressure, and almost led to a goal when Sunderland were able to work an opening for Stewart, whose effort was blocked.

Cambridge kept pushing, though, and the visitors were indebted to a pair of superb last-ditch blocks from Bailey Wright and Lynden Gooch to maintain their advantage.

The conditions by now were atrocious, making it difficult for Johnson’s side to build any momentum on the ball.

May flashed an effort just wide of the far post as the home side continued to apply pressure, but Sunderland close to a third when Stewart sprung Broadhead clear and the striker was just unable to find the far corner.

Cambridge dominated possession through the closing stages, but Sunderland defended resolutely and held on to an excellent clean sheet in the second half.