LEAGUE ONE AND TWO ROUNDUP: Sunderland and Oldham win at last
Daily Mail 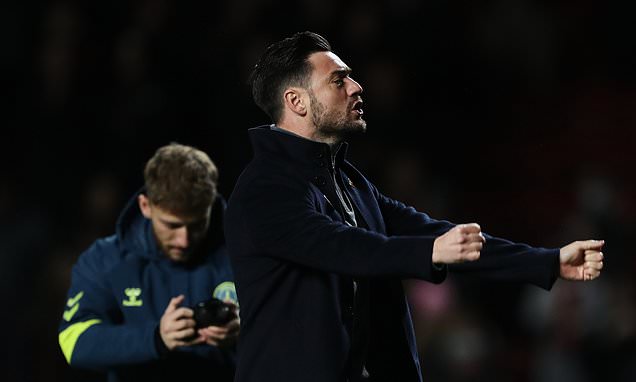 There were plenty of thrills and spills in the third and fourth tier of English football at the weekend, with League One leaders Plymouth losing, positive Covid tests, and Sunderland ending their losing run.

Meanwhile in League Two, Exeter bounced back from their FA Cup substitutes' farce to win their fifth in a row, Oldham 'change their mentality' and Port Vale were stunned by a 93rd-minute own goal.

Here, Sportsmail gives the lowdown on all the action from League One and League Two.

Interim boss Jackson has only dropped two points since stepping up to the top job following the sacking of Nigel Adkins. He is due to talk to owner Thomas Sandgaard this week about making the appointment permanent.

Plymouth boss Ryan Lowe, whose side's 15-game unbeaten run was ended by goals from Ben Purrington and Conor Washington, said: 'Credit to Charlton, you can see they're playing for their manager.'

Plymouth stay top, two points ahead of ROTHERHAM, WYCOMBE and WIGAN, whose match against OXFORD was called off after positive Covid tests.

Rotherham beat CAMBRIDGE 3-1 to extend their unbeaten run to 14 with goals from Ben Wiles, Dan Barlaser and Freddie Ladapo. 'We over-complicated the game a bit,' said Millers boss Paul Warne.

Wycombe needed a late header from Sam Vokes to see off BOLTON, whose recent run is dismal — just one win in seven league matches. 'We feel like the world's against us but we must stick together,' said Wanderers boss Ian Evatt.

SUNDERLAND'S three-match losing streak ended with a 2-0 beating of IPSWICH. Black Cats boss Lee Johnson said: 'It's been tough but we've made it tough because in this division only the fittest survive.'

EXETER CITY were ordered to replay last week's FA Cup first-round win over Bradford for making too many subs, but their progress to second has been far more straightforward - and Saturday's 2-1 home win over CARLISLE was their fifth in a row.

One scorer was familiar — Sam Nombe's opener on the hour was his seventh league goal of the season — while another was not: full back Jake Caprice's first goal in 321 appearances doubled the lead 20 minutes later.

Despite his side extending their unbeaten run to 20 matches, Grecians boss Matt Taylor said: 'We weren't at our best and didn't test their goalkeeper enough.'

That win, though, keeps the pressure on leaders FOREST GREEN ROVERS, who remain two points clear after an easy 3-1 win at HARTLEPOOL.

Two late goals for OLDHAM inflicted a first league defeat in six games on third-placed PORT VALE and lifted them out of the relegation zone.

The 3-2 win was sealed with a 93rd-minute own goal from Vale defender Aaron Martin, who diverted Sam Hart's effort into his own net just 12 minutes after Hart had levelled at 2-2.

Oldham boss Keith Curle said: 'I've said we need to change the mentality here, but the players have definitely done their bit in this game.'