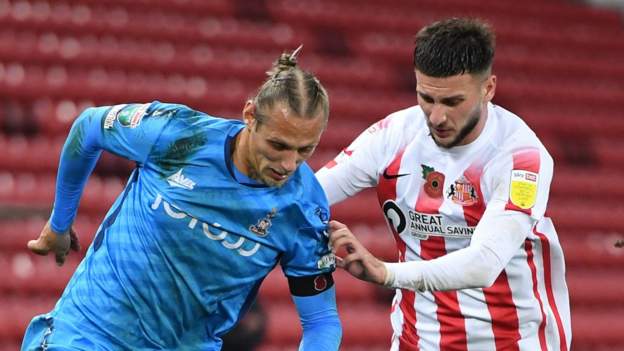 Papa John's Trophy holders Sunderland topped their group to earn a home second round tie despite losing to Bradford City on penalties.

The game went to spot kicks as it ended 1-1 at the Stadium of Light after Theo Robinson and Nathan Broadhead scored.

Gareth Evans scored the winner as the Bantams won the shoot-out 4-2.

Portsmouth, the 2019 winners, squeezed through thanks to George Hirst's last-minute goal in a 3-0 victory over Crystal Palace's Under-21 side.

Rotherham, Bolton, Aston Villa U21, MK Dons, Charlton and Leyton Orient were among the teams to have already qualified prior to Tuesday's fixtures.

Carlisle defeated Morecambe 2-0 to finish top of their group, while Oldham squeezed through despite a 3-2 defeat by Tranmere, who nonetheless topped of their group.

The Latics went through to the next stage courtesy of their superior head-to-head record with 2019-20 winners Salford, who were knocked out.

Crewe's 3-0 victory against already-eliminated Wolves U21 ensured the 2-13 winners headed their group, while in-form League Two side Port Vale put five goals past Liverpool U21 to progress and eliminate Rochdale.

Doncaster edged through against Scunthorpe as they weathered a late storm from their opponents to win 3-2, while Saido Berahino was on the scoresheet as Sheffield Wednesday beat Harrogate 4-0 to win their group, with Town also going through.

Accrington swept aside Fleetwood 4-1 away from home to take top spot in their group, but the Cod Army also managed to qualify despite their defeat.

In the southern section, Jordan Lyden's second-half goal was enough for Swindon to beat Newport County, who were eliminated from the competition.

Elliott List's first-half strike sent Stevenage through to the knockout stages along with Cambridge, who top their group on goal difference.

Pompey's win over Palace lifted them from fourth to second and sent them through at the expense of AFC Wimbledon, while Sutton won the group in their debut in the competition after they beat the Dons 1-0.

Finally, Ipswich ensured they would reach the next stage of the competition courtesy of the added point gained from beating Colchester on penalties after their final group tie ended goalless.

Elsewhere, already-eliminated Mansfield won a nine-goal thriller 6-3 against Newcastle U21 with Danny Johnson scoring a hat-trick while Aaron Amadi-Holloway netted a treble for Burton in their 5-0 thrashing of Wycombe at Adams Park.

Three fixtures remain in the group stages, with round two of the competition to be drawn at full-time after Saturday's League Two fixture between Port Vale and Bradford City.

The second round will also be split regionally with a northern and southern section, with group winners drawn at home against a second-placed side from another group.

Ties for round two will take place from the week commencing 29 November.