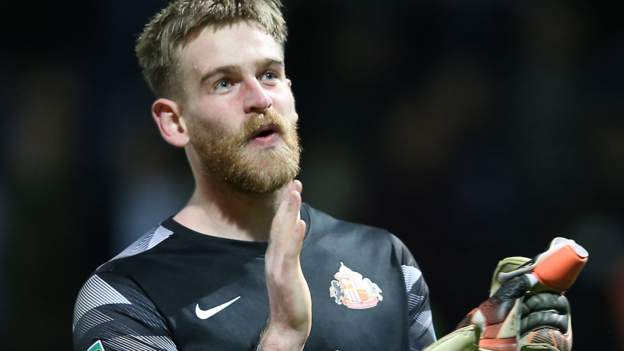 The League One club won the shoot-out 3-1 after a goalless draw in normal time - knocking out the Championship side at the fourth round stage.

Burge was only beaten once from the spot, although Ilias Chair and Yoann Barbet sent their kicks over the bar.

"How many times since I've been here has he made good penalty stops? I think he's got that presence, we do the research and we've got good takers as well.

"We've been good in penalty shoot-outs, it's something we really consider, it's not written on the back of a fag packet. We were composed, we were calm and you always fancy Burgey."

Burge has made eight penalty saves in his career, not including shoot-out stops, including three last season following Johnson's arrival at the Stadium of Light in December.

Although he started the first three league games of the season for Sunderland, Hereford-born Burge has since lost his starting place to Bayern Munich loanee Thorben Hoffmann.

However, the 28-year-old had already been told by Johnson he would be needed for the trip to the Kiyan Prince Foundation Stadium.

He denied Barbet and Lyndon Dykes with crucial saves to keep the Black Cats level during 90 minutes, the first time QPR had failed to score in a league or cup game this season.

"It's tough for goalkeepers because it's a one-man position, if you're a midfielder there might be three places from five and you're always in with a shout.

"It's important we give Burgey the focus for the cup game and told him 10 days ago because it allowed to really hone in, and he was excellent along with the back-four."