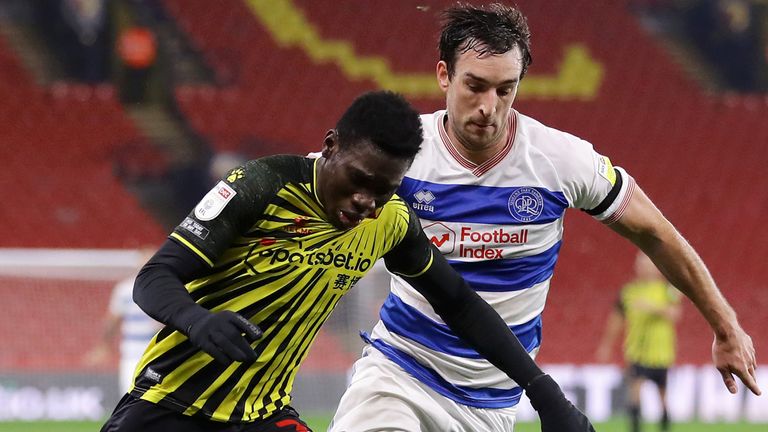 Team news, stats and prediction ahead of QPR vs Sunderland in the Carabao Cup fourth round on Tuesday; kick-off 7.45pm.

QPR are still likely to be without Lee Wallace and Sam Field against Sunderland.

Wallace has been out with a hamstring problem while Field has been recovering from a knee injury.

Sam McCallum could also be an injury concern for the Hoops after he was substituted against Peterborough at the weekend with a tight hamstring.

Image: QPR's Sam Field (left) is set to miss out against Sunderland with a knee issue

QPR reached the last 16 of the tournament after beating Premier League Everton 8-7 on penalties last month.

Alex Pritchard is a "50-50 shout" to play against QPR, according to Sunderland manager Lee Johnson.

The midfielder sustained a neck injury against Crewe but was able to play 70 minutes against Charlton at the weekend.

Sunderland are still without midfielder Elliot Embleton, who is serving the last match of his three-game suspension.

The Black Cats are starting to see players returning from injury, with Corry Evans and Lynden Gooch both returning to action off the bench against Charlton.

Follow QPR vs Sunderland in our dedicated live match blog. Highlights will also be published on the Sky Sports digital platforms and the Sky Sports Football YouTube channel shortly after the final whistle.

Highlights of the Carabao Cup Third Round match between QPR and Everton.

Highlights of the Carabao Cup Third Round match between Wigan and Sunderland.

PART 1 | Where now for Manchester United, and Ole Gunnar Solskjaer? Will 'best player in the world' Mo Salah stay at Liverpool?